The Daily Nexus
Recipes
Don’t Pass Up Passover: Chocolate-covered Matzah
April 8, 2015 at 5:00 am by Erin Gurewitz

Anyone catch Ridley Scott’s “Exodus: Gods and Kings,” the recent adaptation of the story of Moses on the big screen? Although it only got a 28 percent on Rotten Tomatoes and enraged many viewers because of its possible historical inaccuracies, I challenge that, because it was entertaining, action-packed and accurate regarding certain aspects of the story of Exodus. Of course, I am biased because Christian Bale has been my number-one since I was nine years old and watched “Empire of the Sun.” The reason I mention this is that this week marks 3,326 years since the Jews’ exodus from Egypt.

This week, Jews all over the world are celebrating Passover, a holiday celebrating the emancipation of the Jewish slaves from Egypt. Before they were freed, it is said that God cast ten plagues on the Egyptians including turning their water to blood, giving them lice and boils and causing the death of their firstborns — all because Pharaoh, a real jerk of a king, wouldn’t listen to Moses’ plea, “Let my people go!” When Pharaoh finally relinquished the Jews and gave them their freedom, they left in a hurry hoping he wouldn’t change his mind. They were in such a rush that they did not have time to allow their bread to rise — imagine the haste! For this reason, Jews do not eat leavened bread during the eight days of Passover while they revisit the stories of their people’s enslavement and celebrate their freedom.

Instead, we eat Matzah, an unleavened bread. Some will tell you it tastes like cardboard or an unsalted piece of burnt cracker, but I disagree. There are countless recipes that use Matzah including the infamous Matzah ball soup. My cousin, Kate, makes the most delicious chocolate-covered Matzah ever, which I anxiously await eating for dessert every Passover! This year, I managed to bargain the recipe out of her and have already accepted the fact that I will probably gain an extra 10 pounds since I can now make my favorite dessert any time I wish.

I’m going to share my wealth with you. Trust me when I say this dessert is sure to please everyone’s taste buds. My Costa Rican mom hates chocolate and dessert in general (I tell her constantly that she is missing out on one of life’s greatest joys), but she always saves room for dessert this one time a year. Chocolate-covered Matzah tastes like a combination of a heath bar, peanut brittle and chocolate — in other words, heaven. 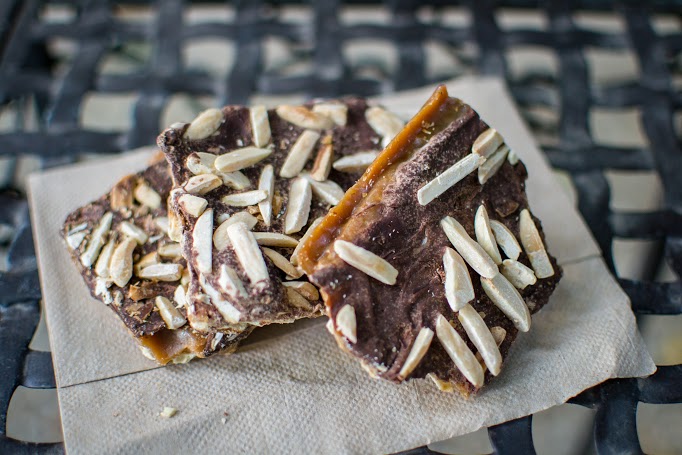 You can use any kind of chocolate chips, although I prefer bittersweet. Also, if you are allergic to nuts or prefer something else, many other toppings will work. I especially like sprinkles.

On Passover we relax and bask in our freedom. I encourage you to follow the traditions of this holiday and enjoy your freedom by beach-bumming it and creating an endless spring break. And, of course, indulging in some toffee-esque chocolate-covered Matzah!