The Daily Nexus
Tennis
Men’s Tennis Remains Undefeated at Home
April 6, 2015 at 5:06 am by Daniel Moebus-Bowles 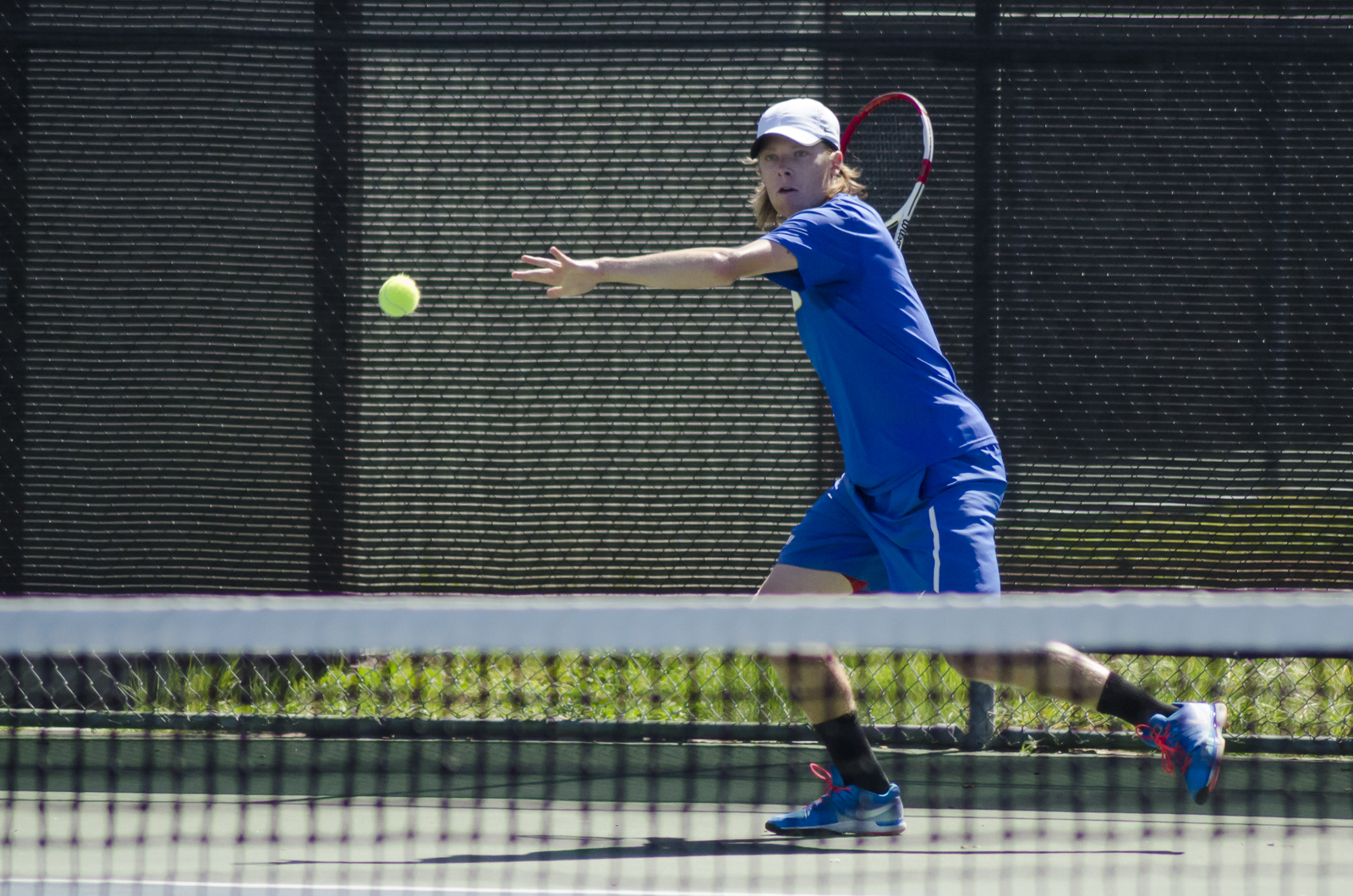 This past weekend, the No. 60 UCSB men’s tennis team tacked on two more wins to its record and kept its unbeaten home streak alive. On Saturday, the Gauchos defeated New Mexico State 4-3 and followed it up with a 6-1 win over conference opponent UC Riverside Sunday.

With these victories, UCSB improves its record to 10-7 overall and 2-1 in the Big West conference.

“We’ve had a great support system and record crowds out here at our matches this season,” sophomore Erik Johnsson said. “Playing at home gives us an advantage, and we have made the most of those opportunities.”

With these two wins the Gauchos are a perfect 8-0 at home with just one match left at the end of the season with rival Cal Poly. Johnsson has personally thrived on his home courts as well, only losing one singles match at home this season.

The match with New Mexico State was ultimately decided by the doubles point, which the Gauchos won to start off the match 2-1. The team of senior Ziad Sultan and sophomore Teague Hamilton took the first victory 6-1 to put the team one win away from the first point. The duo of Johnsson and junior Nathan Eshmade sealed the deal with a 6-2 victory that put the Gauchos up 1-0.

The singles matches were split right the down the middle 3-3 which gave the Gauchos a 4-3 win overall. Among the Gauchos who were able to grab a singles victory was Eshmade, playing in the number one spot for the first time this season. Just a few weeks prior to this match he was commonly filling the third and fourth spot, but has stepped up for his team winning every match since early February. The junior did not disappoint by any means as he was able to take a straight set win 6-1, 6-1.

“I’ve been playing some unbelievable volley tennis lately and Coach has really been noticing it,” Eshmade explained. “Guys haven’t been able to handle it lately, and I’ve been able to really build on top of my game as I go through this season.”

Sophomore Morgan Mays added a second victory for UCSB on court three. Mays struggled early on the first set as he fell behind 2-0, but was able to bounce back and take the set 6-3. The second set was even closer as Mays had to win in with a tiebreaker, 7-5.

Hamilton was another Gaucho to take a singles victory with his straight set victory. He took an easy win in the first set 6-3 and then was forced to a tie-breaker in the second. Hamilton battled his way to a 7-6 victory which clinched the win for the Gauchos in this match.

Sunday’s match with conference opponent UC Riverside was much more one-sided, but, nonetheless, important for UCSB which came in with a 1-1 conference record.

The team started off the same way as they did Saturday, taking the all-important doubles point. The same teams would be responsible as well with a victory 6-2 from Sultan and Hamilton and a 6-1 win from Eshmade and Johnsson.

“We’ve been really working on our doubles play lately, and it’s starting to get really strong,” junior Andrew Riminton said. “You can see how much we’ve improved from prior matches and we’re looking really solid right now on that end.”

Riminton himself, alongside partner Mays, battled in both of their doubles matches this weekend. Although they were stopped early in both outings, they were handedly winning both matches and were even close to match point just before their teammates finished.

The Gauchos were able to win five of their six singles matches against the Highlanders including Johnsson’s impressive win on court four. The sophomore stole the first set away from his opponent, sweeping him 6-0. He nearly repeated this performance as he went up 5-0 in the second set, but then was forced to fight for a 6-2 win. He was the first Gaucho to finish and put his team up 2-0.

Eshmade and Mays followed Johnsson’s example on courts one and two and took straight set victories as well with scores of 6-4, 6-3, and 6-3, 6-1, respectively. Riminton held down court six, playing singles for the first time since February and winning 6-2, 6-2. Freshman Cody Rakela bounced back from his loss on Saturday and took a three set win 6-0, 1-6, 6-4 to give the team its 6-1 overall win.

The team will now head on the road to face UC Davis, University of the Pacific and Fresno State in three consecutive matches starting this Saturday.