The Daily Nexus
News
Lecture Talks About Reintroducing Extinct Animals
April 6, 2015 at 12:13 am by Juliet Bachtel 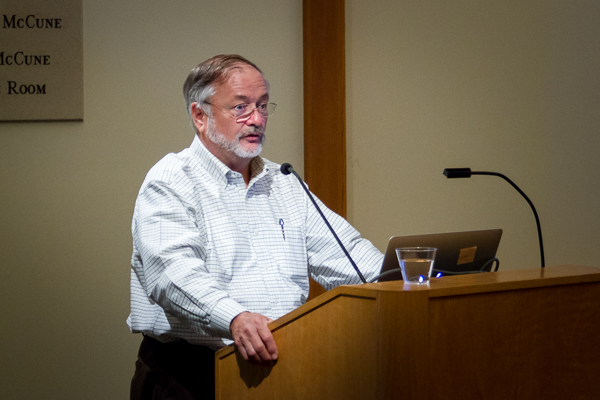 The UCSB Interdisciplinary Humanities Center (IHC) hosted a talk on the possibilities of resurrecting extinct life by Oliver A. Ryder titled “Conservation, De-Extinction, and the Future of Life” in the HSSB McCune Conference Room on Thursday.

Ryder is the Director of the Frozen Zoo Project at the San Diego Zoo’s Institute for Conservation Research, a project that freezes cell samples and DNA from over half a million endangered organisms in an effort to save species coming close to extinction.

According to Ryder, there is increased global concern for conservation and he is disappointed in the United States’ lack of participation in international conservation treaties.

“The international community is making goals to provide standards and higher expectations to express these problems on a global basis,” Ryder said. “Our country is one of the great minority in the world that has not participated in the discussion since we did sign the Convention [on] Biological Diversity. We have a major role to play in the involvement of these discussions one way or another.”

The Convention on Biological Diversity is a multilateral international treaty signed in 1992 by over 150 countries across the world pledging a commitment to ensure conservation of biological diversity within their borders. As of 2014, the U.S. has signed but not ratified the conditions of the 1992 agreement.

Ryder said the now extinct Hawaiian po’o-uli bird was been studied in the Frozen Zoo Project using cells of the bird from previously acquired genetic samples.

“[The Po’ouli bird] is a real just a tragic story and a prime example of dysfunction,” Ryder said. “However we were able to receive some DNA of the species before the bird died and we were able to grow some living cells out of it. It was a surreal experience. How the cells are growing vivaciously and seeing the chromosomes being created and just knowing the organism is gone.”

According to Ryder, in 1987 conservationists counted the amount of California Condors and found a shockingly low total population of about 20 birds. Participants took samples of and tagged each individual bird and found they were struggling to survive due to lead pollution, according to Ryder who participated in the project.

“We used DNA fingerprinting on 23 condors and found each Condor to only three clans and found they have a genetic disease, like a lethal dwarfism that prevented chicks from hatching, resulting from lead in the environment,” Ryder said. “As a result of that, Governor Brown signed a bill banning lead bullets, but California is the only state to do this even though the condor is present in Arizona and Utah.”

Ryder said one of the biggest success stories is of the black-footed ferret, which was thought to have been extinct but reappeared in Wyoming in 1981. Seven of the ferrets brought to captivity reproduced successfully using artificial semen, a process that increases genetic diversity.

“Currently, all 8,000 ferrets in captivity came from seven individuals,” Ryder said. “We received skin biopsies samples from ferrets who were alive earlier to create artificial semen. The semen was then used on the seven individuals who gave birth to ferrets that now have more genetic diversity, which will help the overall survival of the black footed ferret species.”

According to Ryder, the only way to help increase genetic diversity of endangered animals is by cloning, which he considers an expensive procedure.

“Cloning is the only way to do it,” Ryder said. “However this is used as a model for cystic fibrosis research. There are ferrets who are given the gene for the human form of cystic fibrosis that are then used as test subjects for medication treatment. They can take the ferret cell but it costs about $50,000 to $150,000.”

Ryder said the San Diego Zoo is attempting to use Frozen Zoo Project samples to save the only five remaining northern white rhinoceros, but that saving the animals will not be enough to save the species if the rhinos do not breed.

“We took some cells from one of the rhinos and grew stem cells from them, which can make any cells in the body,” Ryder said. “Theoretically we can save the white rhinos, however the rhinos aren’t repopulating. There are five walking around, but if there is no offspring, they might as well be extinct already.”

According to Ryder, future generations are raised with notions of potentially saving endangered species, and must decide the future of manipulating genomes.

“It’s hard to watch movies like ‘Ice Age’ because it assaults everything we know about DNA and genes, but this is the world our children are growing up in,” Ryder said. “They’re growing up believing this is possible, and it might be, but it’s up to them.”

Fourth-year English major Bree Brydenthal said she believes scientists need to work purposefully when conducting research and should consider whether their work will benefit the community.

“I think the question that has to be asked is what is the point of them branching out to bring these animals into a world we don’t need them in,” Brydenthal said. “Is it beneficial to our current ecosystem or will it have serious environmental consequences? I think we have to determine what place it will have.”

“In terms of morality, it’s the issues that come up of this topic,” Acuesta said. “People are talking about cloning or bringing back animals that necessarily don’t have a place in our world right now. But also we’re not talking about mammoths, we’re talking about species such as the passenger pigeon too.”