The Daily Nexus
News
Deltopia Calmer Than Last Year’s
April 6, 2015 at 1:34 am by Alyssa Schmidt 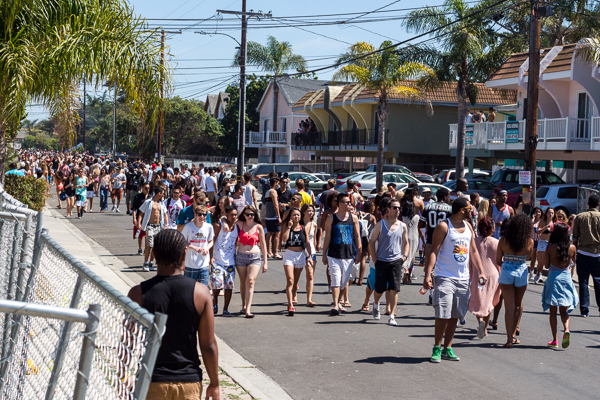 This past weekend’s Deltopia street party did not repeat last year’s violent riots and drew only half the crowd, with approximately 10,000 people on the streets of Isla Vista by midday and only roughly 500 people by 9:30 p.m., according to preliminary statistics released by the Santa Barbara County Sheriff’s Office (SBSCO) yesterday.

The festivities drew smaller crowds compared to the 20,000 to 25,000 participants in 2014 and the 15,000 to 18,000 participants in 2013. The Sheriff’s Office partially attributed smaller crowds to the efforts of I.V. residents to defer out-of-towners from coming into their homes and parties. Other factors contributing to the decrease in attendees, according to the Sheriff’s Office, include the university’s efforts, student-only activities, over 100 police officers from across UC campuses and assistance from law enforcement agencies from the surrounding counties. According to the Sheriff’s Office, the county festival ordinance prohibiting music after 6 p.m. and restricting parking on certain streets in I.V. and Goleta was “instrumental” in reducing the crowd size.

On more than several occasions, students came up to our crews and thanked them for being there, which was very appreciated. – Santa Barbara County Fire Department Public Education Officer Mike Eliason

Despite the 50 percent decrease in attendance from last year, the Sheriff’s Office stated the number of arrests and citations remained high because of increased presence of law enforcement. Preliminary numbers provided by the Sheriff’s Office count 140 citations and 102 arrests issued, compared to 190 citations and 130 arrests during last year’s Deltopia. Medical incidents this year also decreased significantly with only nine medical transports reported compared to 50 in 2014.

“The crowds were smaller and more respectful than last year,” Eliason said in an email. “On more than several occasions, students came up to our crews and thanked them for being there, which was very appreciated.”

According to Eliason, the calmer crowds were in part due to the planning and coordination that began months prior to the event.

“I think the tremendous planning and coordinated effort by everyone affiliated with the event helped to make it more enjoyable than last year,” Eliason said in an email.

Associated Students External Vice President of Local Affairs (EVPLA) and fourth-year psychology major Cameron Schunk said the number of arrests and citations were a reflection of the saturation of police within I.V. and not necessarily of a reckless student body.

However, I think there were many disadvantages to this presence. … Festival ordinances, for example, infringe upon some of what I believe to be my fundamental rights to private property. – Fourth-year economics and environmental studies double major Alex Foehr

Schunk said he agreed the coordinated efforts demonstrated a sense of ownership by I.V. locals for the event.

“I noticed a lot of cooperation amongst different entities in order to really take ownership of the event and provide structure,” Schunk said. “UCIV, the campus, IVFP, UCPD, and Life of the Party … There was a sense that this was more than just some wild street party that got out of control automatically.”

According to Schunk, if this trend of community involvement continues he believes extra policing will not be necessary at future Deltopia weekends.

“I think even police officers resonated with that and it helped them show a little more restraint,” Schunk said. “I think over time we could see the level of necessary policing decrease more and more as we add in that structure that helps support the event.”

Schunk said to continue positive progress for a safer Deltopia, he hopes to see more focus on the student volunteer program University of California Isla Vista (UCIV), which helped facilitate Deltopia and the lawful conduction of festivities this past weekend.

“I think really the thing I would love to see targeted and expanded upon next year is the UCIV program. And the idea of student volunteers,” Schunk said. “The reception generally was incredibly favorable. Countless people came up to us and said, ‘Thank you so much for taking your time today to hand out water bottles.’ People were almost incredulous.”

Fourth-year economics and environmental studies double major Alex Foehr said he understands the need for police action during Deltopia and hopes the event will gradually return to a smaller party meant for I.V. locals.

“I think the intimidation from the sheer number of police this Deltopia was one of the only benefits of mass law enforcement,” Foehr said. “My 300 person party getting shut down at 3:00 p.m. at the time it seemed unnecessary, but it was for the general welfare and I understand that. I feel that next year’s Deltopia will be more local and back to normal like before the [2014] riots because of this intimidating police presence.”

Foehr also said he believed the increased police presence had some disadvantages.

“However, I think there were many disadvantages to this presence. … Festival ordinances, for example, infringe upon some of what I believe to be my fundamental rights to private property,” Foehr said. “Also, it’s a waste of public resources to have so many cops here, just because of irresponsible college kids.”

Alumnus Nehanda Wells attended Deltopia this past weekend and said she also experienced a run-in with the police, but the incident did not change her opinion on the positive aspects of additional policing.

“Outside BevMo! … a cop banged on my window and asked to see my ID. I’ve never had that happen before. It was intimidating because I wasn’t doing anything wrong,” Wells said. “I’m not saying that it was a bad thing. I just think that was reaching too far. But as far as having more police here for the weekend, it obviously worked because things were much calmer this year than last year.”

Deltopia last year was a result of the police rioting against the community. This year’s Deltopia is a direct result of this…welcome to Gulag Isla Vista. Schunk is the apologist for your prison guards in Gulag Isla Vista “According to Schunk, if this trend of community involvement continues he believes extra policing will not be necessary at future Deltopia weekends. ‘I think even police officers resonated with that and it helped them show a little more restraint,” Schunk said. “I think over time we could see the level of necessary policing decrease more and more as we add in that… Read more »

b
Reply to  Michael E. Boyd

And you are exactly the kind of person that no one wants in Isla Vista.

I am told someone at UCSB arranged a good concert for UCSB students only, which served to keep them safe off the streets, away from the once a year crazy visitors, and entertained. Nice job by whoever that was.