The Daily Nexus
Music
Interview with CORNERS
April 2, 2015 at 11:38 am by Artsweek Editor 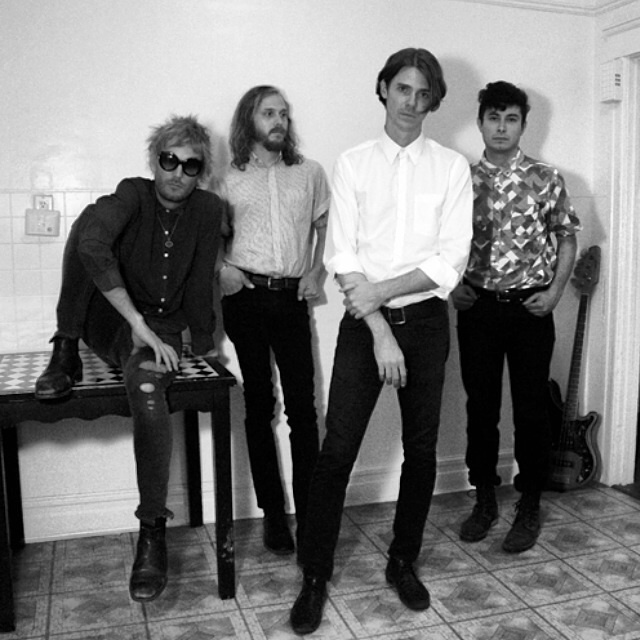 Coming from Echo Park, L.A., post-punk band CORNERS talked to me after their Burgerama set last weekend about raunchy show happenings and good energy. Composed of Tracy Bryant, Rick Mabery, Billy Changer and Jeff “Jeffertiti” Ramuno, Corners came to the fest just before embarking on a Euro tour. Their new album, Maxed Out On Distractions, contains songs that will teleport you to dark, sweaty underground ‘80s nightclubs. They also have imagery to match with a rather extensive collection of high-quality music videos that play out more like hipster short films.

Nadine Bedwan: Do you prefer to play bigger, festival-type shows [like Burgerama] or do you prefer smaller, more intimate venues?

Jeff Ramuno: They both have their charm. It’s nice to play on a big stage with a good sound system, and if you’re around a bunch of people, you can feel their energy. But same thing goes where if you’re playing at a super small spot and it’s packed with crazy energy. I personally just judge it on the energy.

Rick Mabery: Yeah, I think we all do.

NB: How would you describe the energy today?

JR: It was gooood. I think, being at 12 o’clock noon, it was surprisingly good. The crowd felt cool — it was a good combination.

NB: How do you guys pass time on the road when you’re traveling?

RM: Jokes are fun. We have a lot of stupid jokes we like to tell.

TB: Or we like to look at peoples’ Instagrams and make fun of them.

TB: I’m not gonna say! Just weird people, not in a mean way.

NB: What is the weirdest thing you’ve ever seen at one of your shows?

JR: One show at Salt Lake City on the last tour was kind of raunchy. There was somebody having sex outside of a show we played in Salt Lake, the Mormon capital of the world. There was like a … I don’t know, I didn’t really see it personally I just saw the pictures but …

TB: It’s kind of weird to describe — like you know how people circle around when there’s a fight? It was kind of like that. It was very … it was weird.

JR: There was also a fight that day, too. There was a fight in the show and some weird sex activities outside the show.

NB: What is your dream tour location?

Band: Probably somewhere beachy, like Australia’s really fun. Maybe like Hawaii would be awesome. Somewhere that you would want to vacation to, and then you get to play shows, too. Kill two birds in one.

NB: Who are your favorite bands?

JR: I saw Blonde Redhead play here the other day. That was really cool.

NB: What is the most boring city you’ve played a show in?

TB: Not really boring, but we played in Beaumont, Texas and it wasn’t boring, it was fun, but the town was definitely, like, they were looking at us like we were from Mars or something.

JR: I played in Fargo before. That was really … boring.

JR: Yeah, it was just like the movie. People were killing each other.

NB: Was Steve Buscemi there?

JR: Yeah, that was the best part of all.

NB: What has been your most surreal moment [as a band]?

TB: Today’s pretty cool, I mean, I bought fucking Weezer’s CD when I was 10 years old so to be on a bill with a band like that is pretty wild. The Blue Album is a pretty big part of like everybody’s life, you know? Same with Bone-Thugs-N-Harmony that was just music that was playing all through our middle school. So it’s pretty cool, stuff like that.

JR: Now we’re on a lineup with them, it’s kind of weird. Or not weird, but like you said, weird in a good way.

NB: What is your favorite song that you’ve written?

JR: I really like the song We’re Changing. I can say that cause I didn’t write it, Tracy wrote it, and I like it a lot. Maybe the new song that we all wrote together.

TB: There’s a new song that we all wrote together, I think that’s one of the best songs that I’ve ever been a part of, personally.