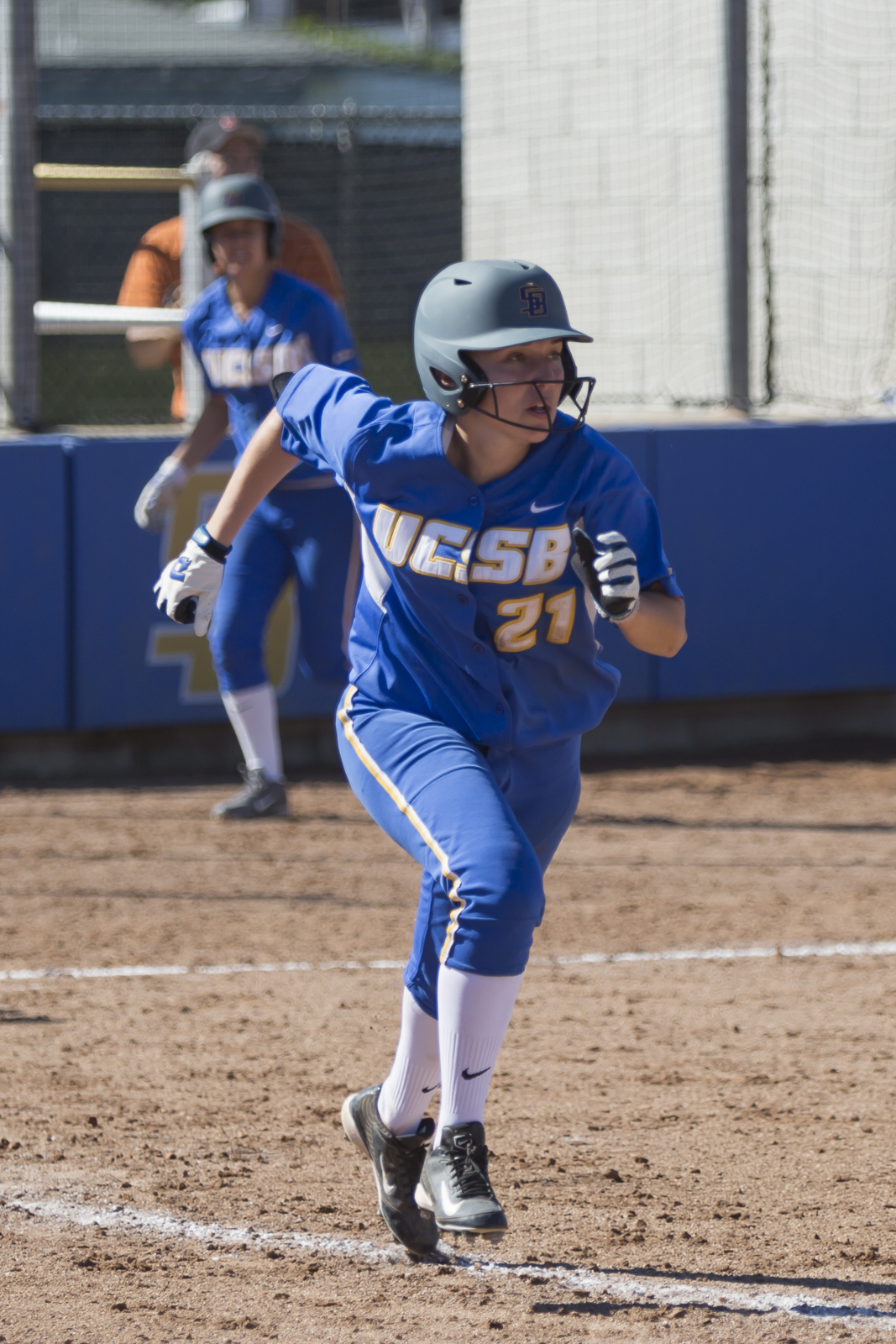 After hitting the ball, Arianna Palomares sprints to first base. Dustin Harris/Daily Nexus

The UCSB softball team will head to San Luis Obispo as it is set to open up a three-game road series against Big West opponent Cal Poly.

The Gauchos stumbled a bit in their first conference appearance of the season against Cal State Fullerton, but Tuesday’s back-to-back victories look to have the team on the right track.
Gaucho bats have continued to remain hot as the team now boasts an impressive five hitters with batting averages above .300. Junior infielder Arianna Palomares leads the way with an average of .390. Palomares also has 24 RBI to her credit this season and leads the team with 13 doubles.

Wisdom has also been a major contributor to this offense, leading the team with six home runs and 27 RBI to this point in the season.

“Honestly, I have been hitting the ball better this season,” Wisdom said. “Since I don’t play defense anymore, I can focus solely on hitting.”

Moore and Wisdom combined for back-to-back home runs in Tuesday’s late game and helped send the Gauchos to extra innings where the team ultimately came out on top. These two have become a lethal combination at the plate and should give Cal Poly pitchers a lot of trouble.

As a team, the Gauchos are hitting .308 this season and sport an impressive on-base percentage of .388 thanks to the team’s 105 combined walks.

Perhaps the story of the week however is the strong pitching the Gauchos got out of junior Ashley Ludlow. Ludlow has had some very apparent struggles early on in the season, but she seems to be finding her form.

In Tuesday’s opening game, Ludlow pitched the final three innings and only allowed one run to cross the plate. Then, after falling behind 3-0 in Tuesday’s late game, Ludlow pitched a scoreless 6.1 innings allowing only two hits.
UCSB still sports a fairly high team ERA of 5.79, but the improvement has been steady and the Gauchos have seen the success.

The Mustangs don’t sport a lot of big bats in their lineup and their hitting has been rather bland this season. The team sports only two players hitting above .300, with sophomore outfielder Courtney Tyler leading the way at .333.

The biggest threat to the Gauchos comes with sophomore pitcher Sierra Hyland. Hyland has an ERA of just 2.04 and has pitched an astounding 164.1 innings thus far. Opponents are batting just 1.91 against Hyland this season.

The first pitch of this series will take place tomorrow at 2 p.m.

A version of this article appeared on page 13 of April 2, 2015’s print edition of the Daily Nexus.