The Daily Nexus
On the Menu
The Hello Kitty Cafe Truck: Both Delightfully and Sickly Sweet
March 31, 2015 at 5:00 am by Kelsey Tang 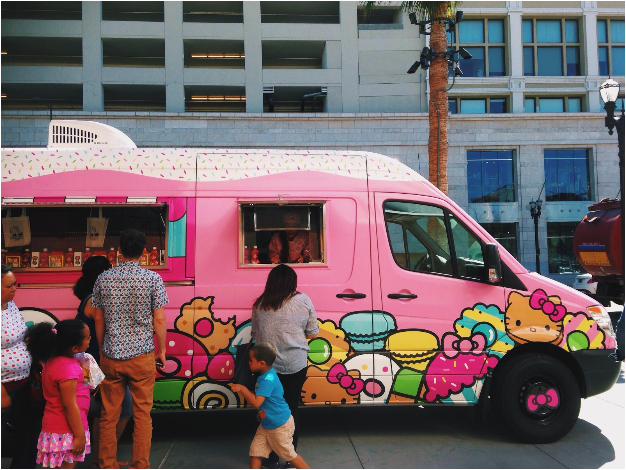 Life rolls out before us in an unpredictable and variable manner. The only constant that remains just as pure and classic is, surprisingly, Hello Kitty. In my early infantile days, my mom would bundle me within a Hello Kitty blanket. Fast forward a couple years to my adolescence and my eyes would stay glued to the television series starring the anthropomorphic cat. Now, my present-day self has reunited with the childhood figure by channeling my weakness for cute cuisine, and I’m positive I’m not the only one reliving my favorite childhood memory.

A global sensation, the lovable Japanese character will launch its own Hello Kitty Cafe in Orange County this upcoming summer. In order to build anticipation, the company has released their exuberantly pink Hello Kitty Cafe Truck to stop by major California cities and offer die-hard fans a small taste of the cafe’s menu. One of the lucky cities included Glendale on March 28, and I decided to indulge myself once again in the sprightly world of the international icon.

Boasting a dynamic influence that spans across the world, Hello Kitty events typically attract large crowds and long lines. Needless to say, I found myself surrounded by parents donning Hello Kitty-printed t-shirts and children sporting fuzzy cat ears. The event attracted a lengthy line of devotees willing to idly stand beneath the broiling sun and splurge on pre-made pastries.

The modest menu featured Hello Kitty-themed desserts: doughnuts, macarons, mini cakes and hot chocolate. It was unspoken knowledge amongst fans that the sweets were already mass-produced elsewhere rather than intimately prepared fresh within the tiny truck. Peeping inside, I saw stacks of pink boxes that once held the precious pastries. It was also unspoken knowledge that we were merrily flinging bills towards the brand name, and taste played no significant role in our allegiance for the character. 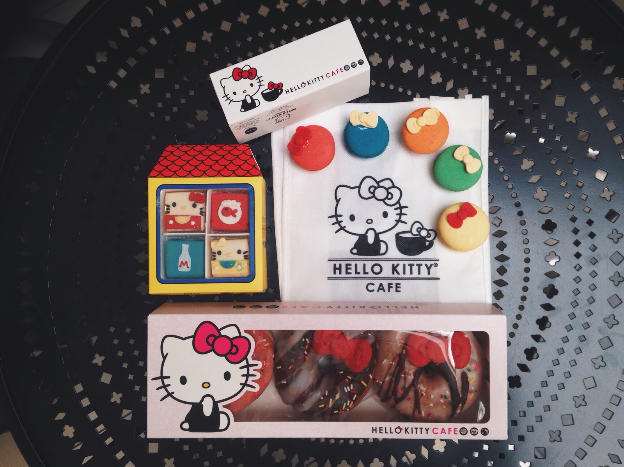 I expected a sickly sweet flavor to permeate throughout the desserts; to my dismay, the prediction blossomed into reality. The doughnut, sized to fit within an adolescent’s palm, tasted like a typical gas station doughnut, with the exception of sparse sprinkles and a thin-but-powerful glaze coating. The accompanying red chocolate bow melted into an overly sugary mixture that barely resembled the rich and deep flavors of genuine chocolate.

The macarons tasted a bit more tolerable, possessing the perfect but neat crumble of a well-prepared macaron. The varying flavors of each color slightly compensated for the overwhelming sweetness. Though faintly disappointed, I diverted my attention towards the cubes of mini cakes bound in an endearing house package. And probably not much to the reader’s surprise, a single nibble soaked my tongue with a flavor that resembled the processed and artificial qualities of plastic.

While the dainty confections are a novelty in and of itself, attributed to the glaring eyeful of cuteness, biting past the surface may result in an unwelcomed blood sugar spike. However, the Hello Kitty Cafe Truck fulfills our pursuit for visual cuteness, and our concern for anything remotely delectable must be sacrificed.

Personally, I don’t mind the cloying flavors and instead prefer to relish the subtle symbolism. Hello Kitty encompasses all the associations that come with nursery colors and simplistic illustrations. A blend of those two aspects, with the addition of some toothsome nostalgia, results in a flood of undeniable cuteness, only to accurately manifest its sweetness into the intensely sugary desserts of the Hello Kitty Cafe Truck.