The Daily Nexus
Sports Blogs
NHL PR: Blackhawks, Rangers, and Flames Continue to Shine Without Their Leaders
March 31, 2015 at 5:00 am by Jack Mathews 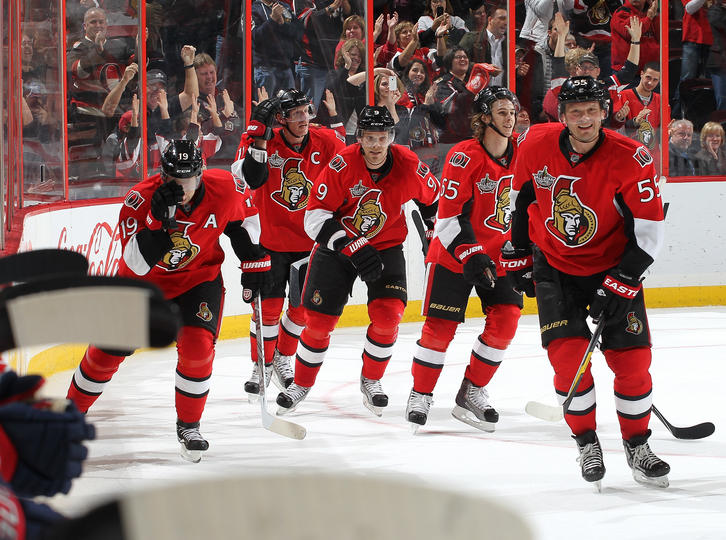 The past three weeks have been as exciting as ever with many teams across multiple divisions deadlocked for playoff position with just over a week left in the regular season. The Ottawa Senators have gone 15-3-2 down the stretch to make the Eastern Conference wild card race a three-team battle that will be settled dramatically in the upcoming weeks, while the Los Angeles Kings are currently struggling to even make the postseason as they hope to defend last year’s title.

The NHL has always been known to epitomize the importance a team as opposed to a single star player as each and every team gives everything they have into every pass, shot, hit, and save on any given night. This season has proved that point with the play of the Calgary Flames, Chicago Blackhawks, and New York Rangers this season. All three teams lost arguably their best player to injury and since then all three teams have thrived. They have a remarkable combined record of 40-10-7 since their All-Stars went down to injury and each team currently finds themselves in playoff position. The success of these teams and their ability to rally around their leaders and continue to play well just shows one of the many beauties to the game of hockey.

1. New York Rangers (47-21-7)- It is a good time to be a Rangers fan right now as they have rocketed to the top of the Metropolitan Division with a record in their last games. Even better news is that All-star goalie Henrik Lundqvist returned to action. (+7)

2. Anaheim Ducks (49-22-7)- Anaheim has been plagued by disappointing in the postseason in recent years; however, they seem to have found their identity and currently lead the NHL with 105 points. The Ducks have won three games in a row and seem to be getting hot at just the right time. (+2)

3. Tampa Bay Lightning (47-23-7)- While Ben Bishop is still a question mark in goal for Tampa Bay, there is no debating that the Lightning have the NHL’s deadliest offense and will be sure to make any opponent nervous come postseason play. Tampa Bay is getting contributions from their entire roster and have five different players with +/- ratings at +20 or above this season. (+2)

4. Montreal Canadiens (47-22-8)- Montreal continues to lead the Atlantic division thanks to a historic season from goaltender Carey Price; however, are they relying on him too heavily? The Canadiens have the 24th ranked shot differential in the league at -2.1 and have lost four of their last five games. (- 3)

5. Nashville Predators (47-22-8)- Nashville has looked much less unstoppable over the past few weeks as a six-game losing streak earlier this month has taken the Presidents Trophy from the Predators grip. Only one of the Predators top 15 point-scorers has a negative +/- rating. That is an amazing testament to this team’s consistency from top to bottom. (-2)

6. St. Louis Blues (46-23-7)- The Blues currently sit in second place in the Central division but a talented Predators squad and a streaking Blackhawks bunch will make for an exciting divisional race down the stretch. Ken Hitchcock has to be impressed by the play of his power play that leads the league with a 25% conversion rate on the man advantage. (-4)

7. Chicago Blackhawks (46-24-6)- Chicago joins the Rangers on the list of teams to exceed expectations after losing their superstar player. The Blackhawks have gone 10-4-1 since losing Patrick Kane and have an outside shot of winning the Central division with a little luck. (0)

8. New York Islanders (45-27-5)- New York may not be so keen on earning home-ice advantage in the playoffs as they only won one game at Nassau Coliseum this month and seem to be scrambling for answers at the wrong time. They have gone 4-6-3 in March and find themselves seven points behind the Rangers in the Metropolitan division.  (-2)

9. Minnesota Wild (44-25-7)- Minnesota has continued to win games at an impressive clip over the past few weeks and seem to have a playoff berth locked up. Devan Dubnyk’s 35 consecutive starts will undoubtedly be questioned if the Wild falter in the postseason.  (+2)

10. Detroit Red Wings (40-23-12)- Detroit continues to serve as the model of consistency in the NHL and their strong power play and possession numbers continue to help them generate victories. The Red Wings will be a tough out in a seven game series for any opponent. (-1)

11. Washington Capitals (41-25-10)- Alexander Ovechkin continues to epitomize the definition of a captain as his 49 goals have paced Washington all season long. The Capitals are just three points back of both Pittsburg and the Islanders and have a realistic chance to finish second in the Metropolitan. (+1)

12. Pittsburg Penguins (42-23-11)- Pittsburg has lost six of their last nine games and have looked completely abysmal at times throughout March. The Penguins are another club that has become infamous for their poor postseason play and unless they turn things around soon then they could be in trouble again this year.  (-2)

13. Winnipeg Jets (39-25-12)- Winnipeg has slowly but surely began to distance themselves in the wild card race and the rejuvenated Tyler Myers has continued to be one of the best trade deadline acquisitions to this point. Ondrej Pavelec and Michael Hutchison will have to play strong in net to give the Jets a chance in the playoffs against the Western Conference elite. (+2)

14. Ottawa Senators (37-26-12)- Ottawa has arguably been the best story of the season as they have posted a 15-3-2 record since placing rookie goaltender Andrew Hammond in net. The Senators have lost three games in a row and remain three points behind Boston for the final wild card spot but will need to get some help if they want to pass the Bruins.  (+4)

15. Vancouver Canucks (44-27-5)- Vancouver never had a chance to keep pace with Anaheim all season but the play of the Sedin twins and Radim Vrbata has helped pace the Canucks to second in the Pacific division. Can Ryan Miller return to his All-Star form in the postseason? (-2)

16. Boston Bruins (38-25-13)- Boston has been tough to figure out this month as they won five in a row, lost their next six games, and have now won their last two games to close out the month. The Bruins squandered their wild card lead only to regain it a few days later and will look to postseason veterans like Zdeno Chara and Tuukaa Rask to save their season.  (+3)

17. Calgary Flames (42-28-7)- Another team who has not let injuries destroy their season has been the Calgary Flames. After losing captain Mark Giordano for the season Calgary has continued to play well and currently lead the Los Angeles Kings by 1 point for third place in the Pacific division. (-1)

18. Los Angeles Kings (37-26-14)- The defending Stanley Cup champions are in serious trouble of missing out on the postseason together. However, they have seven games left to pass up Calgary and this seems like a scenario in which the Kings sneak into the playoffs as a wild card and make some serious oise from there.  (-4)

19. Florida Panthers (35-26-15)- Florida is only four points behind Boston and ne point behind the Senators for the final wild card spot. The Panthers still eed quite a bit of help but with two games remaining against Boston they re not finished yet. Tuesday’s game against the Bruins will be a must-win. +1)

20. Colorado Avalanche (35-29-12)- Colorado has been the tale of two halves his season as their 13-7-1 record since Valentine’s Day provides hope for the upcoming season. Avalanche captain Gabriel Landeskog has spearheaded this turnaround with 15 points in 12 games this month. (+2)

21 Dallas Stars (37-30-10)- Dallas has been awesome over the last few weeks and with Tyler Seguin back, Stars fans must cringe seeing what their season would have been with better goaltending. Rookie John Klinberg has been stellar all season and looks like he will be a star in Dallas for years to come. +4)

22. New Jersey Devils (31-33-12)- New Jersey has had very little to smile about all season but the play of Corey Schneider has been remarkable. His 26-28-4 record while maintaining a 2.19 goals against average and a .928 save percentage shows just how little support his team has given him this season. +2)

23. San Jose Sharks (37-30-9)- It is not often that San Jose finds themselves in the bottom half of the power rankings but the Sharks offense has lacked their usual flare all season and Annti Niemi has not been his usual dynamic self in et. San Jose will miss the playoffs for the first time in the last 10 seasons this ear. (-6)

24. Columbus Blue Jackets (36-35-4)- The 2014-15 season has not been kind to he health of Columbus players as they have been tarnished by injury seemingly all season and their record reflects that. However, they have won ine of their last ten games and seem to have quite a few pieces in place for a right future. (+2)

25. Carolina Hurricanes (28-36-11)- Carolina is not playing like a team that is in contention for the NHL’s worst record as they have made the elite teams of the league work for their wins down the stretch.  (-2)

26. Philadelphia Flyers (30-29-17)- Philadelphia was on a tear similar to that of the Senators for most of January and February but have gone cold since. The Flyers have lost nine of their last eleven games and do not seem to have much fight left. (-5)

27. Toronto Maple Leafs (28-42-6)- Toronto has only won seven games in their last 34 contests and are limping into the offseason. Expect big changes in Toronto as this team will look to build from the ground up. (0)

28. Edmonton Oilers (23-40-13)– Edmonton has an impressive nucleus of young players but won back-to-back games this week for the first time since January. It seems as though the Oilers will look to the draft yet again for the player who can turn this franchise around. (0)

29. Arizona Coyotes (23-45-8)- It is hard not to feel bad for Shane Doan. The Coyotes captain has remained loyal to this franchise and has not received much in return from his teammates. Arizona has won two of their last four games which is not much but may be significant in securing the first overall pick for Buffalo. (0)

30. Buffalo Sabres (20-47-8)– Buffalo has won just 2 of their 12 games this month and the lone bright spot has been the play of young guns Jack Eichel and Connor McDavid who are both in contention for the first overall pick. (0)