The Daily Nexus
Sports
Pedal Punk Amazes at Campbell Hall
March 11, 2015 at 11:32 am by Evander Hilton 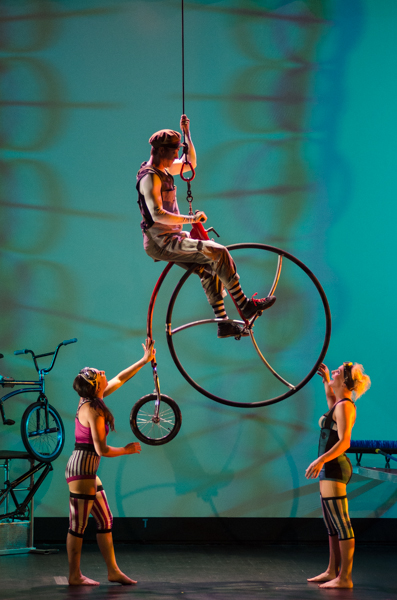 The act presented by Arts & Lectures, began by showcasing the circus performers acrobatic skills, warming up the crowd for the feats of strength and flexibility they were about to witness. A single blue BMX bike rested on a pedestal behind the performers from the start of the show, with a shopkeeper and his apprentice in charge of it.

With the bike being in the center of the stage, it had the effect of keeping the audience guessing when it would be used. Many times throughout the performance the apprentice attempted to ride the bike, only to be stopped by the shopkeeper; similar to Mickey Mouse as the sorcerer’s apprentice in the Disney film Fantasia.

The bike shop apprentice eventually disregarded his master’s wishes, grabbing the bike from the pedestal and replacing it with his broom. He proceeded to wow the crowd with BMX inspired movements that treated the bike as an extension of himself.

Humor was as much a part of the show as was the circus acts in Pedal Punk, as evidenced by the constant laughter from the crowd. Many times during the performance, children’s laughter was loud enough to prompt reactions from performers on the stage, who showed their appreciation by acknowledging their young fans during the show.

The moving platform that rested on the stage for much of the show gained more and more use the night went on. At first the platform was used as a frame for the stage, and a space for the performers to work under.

In the second part of the show performers hooked a bike onto the contraption that sat in the center of the stage, with two circus performer women holding onto the bike. Adjacent to the hook was a counter lever operated by another performer.

As the women were raised up into the air they began preforming tricks, using each other to stay balanced. A few times during the performance only one woman was holding onto the bike, while the other put all her weight on her partner, with complete trust that she would hold her grip and not drop her.

During the intermission the tarp was taken off of the centerpiece, leading up to the audiences anticipation for the finale of the show. When Cirque Mechanics took the stage again, it was quickly discovered by the audience that the tarp had been covering a huge trampoline.

The show picked up speed at this point, with all the cast members playing a part in then final act. Many spent time on the trampoline, catapulting their bodies skyward towards the metal bar that rested on top of the contraption, only to let go and hit the trampoline again.

At the end of the show performers made their way to the front of the stage, each receiving appreciation for the circus act they put on. The audience continued to clap long after Cirque Mechanics left the stage, leading to the performers swift return to the stage. This is when the crowd gave them a standing ovation, putting smiles on the cast members faces.