The Daily Nexus
Sports
Gauchos Close Season Out With Pair of Losses
March 9, 2015 at 6:30 am by Michael Jorgenson 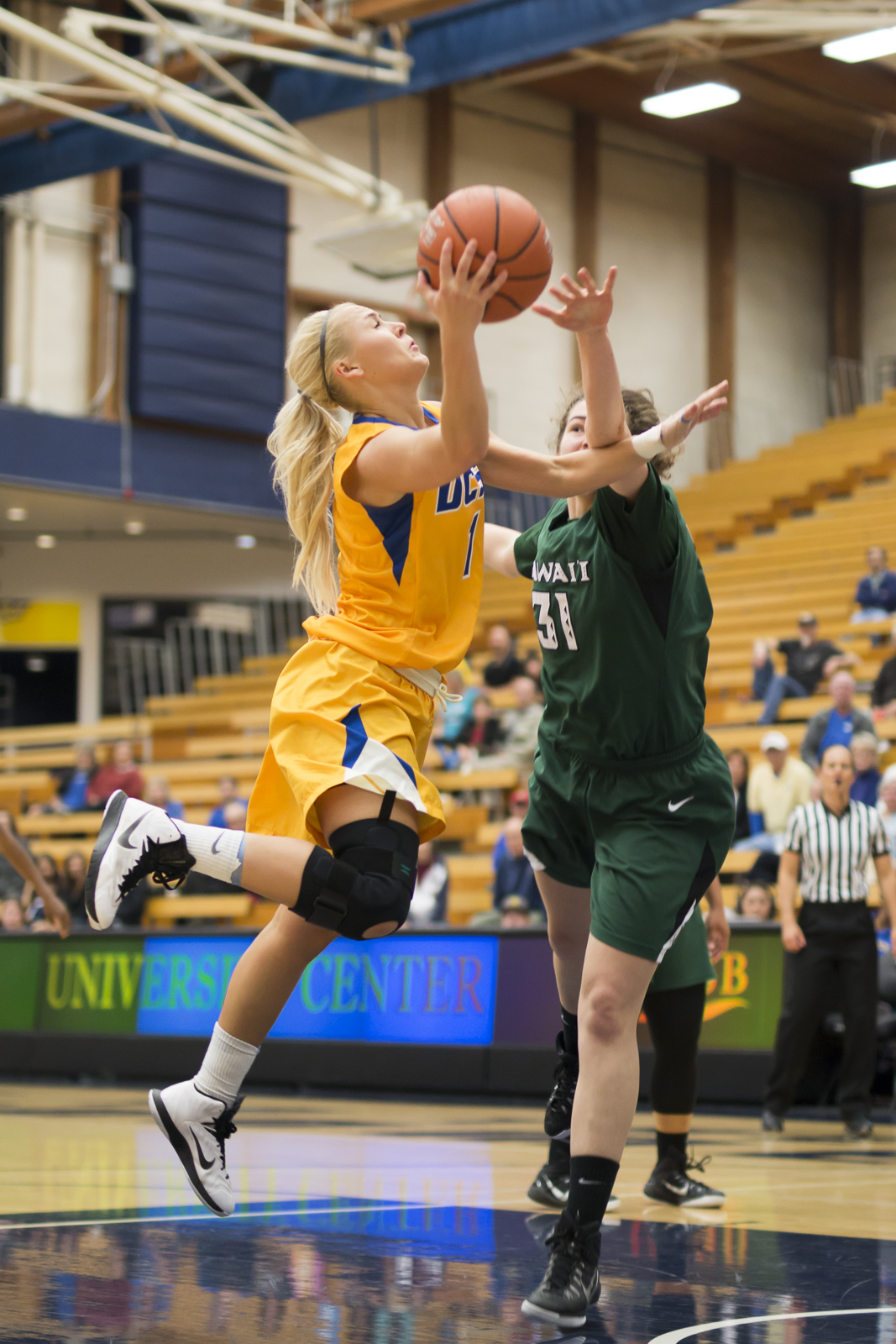 The UCSB women’s basketball team had a rough year to say the least, but coming down to its final two games, it still had a slim chance to qualify for the Big West Tournament. That chance was taken away after a 60-36 loss to Hawaii on Thursday. The Gauchos then closed their 2014-15 campaign out with an 84-63 loss at Cal Poly on Saturday.

Santa Barbara ends the year with a 2-27 overall, 2-14 Big West record. Hawaii finished the season winning its final 14 games to claim the Big West title with a record of 22-7 overall and 14-2 in conference play. The Mustangs were able to claim a third place finish after their win over the Gauchos, ending the regular season with a 15-13 overall and 10-6 Big West mark.

Although UCSB entered its final game against Cal Poly knowing that it would only be for pride, the Gauchos played some of their most inspired basketball in the first half. Senior guard Kristine Brance, playing her final game in a UCSB uniform, got things started with a three-pointer on the team’s first possession, setting the tone for what would be a high scoring first stanza.

As a team, the Gauchos shot an impressive 15-25 from the field in the first half for a season-high 41 points. They were able to do this behind their long-range shooting, where they went 7-9 from beyond the arc. Junior guard Dioseline Lopez was hot early, going a perfect 3-3 from distance, while freshman guard Makala Roper went 2-3 herself. Despite the hot shooting though, UCSB still found itself down 48-41 at the half.

Cal Poly’s Ariana Elegado answered UCSB at every turn, putting up 19 points of her own on 5-6 on three-pointers in the first half to go along with five assists. The senior guard went on to finish with 24 points on 8-14 from the field.

Bench production was the theme for the Gauchos on the day, as all three of their double-digit scorers were not starters. Lopez and Roper ended the game with 13 and 11, respectively, while forward Chaya Durr knocked down an efficient 5-6 from the field herself, finishing her freshman campaign with a solid 11 point outing.

Unfortunately for the Gauchos, they could not maintain their hot shooting in the second half, going just 8-24 from the field and being outscored 36-22. Once again, a huge difference on the glass which saw UCSB get outrebounded 47-22 for the game proved to be the difference.

Senior forward Taryn Garza recorded 12 rebounds and was the Mustangs’ second leading scorer with 11 points, giving her the game’s only double-double. UCSB’s sophomore point guard Onome Jemerigbe facilitated the offense throughout the game, finishing with a personal-best nine assists. She had seven in the first half alone.

In Thursday’s game against Hawaii, UCSB needed a win to keep its slim hopes of postseason play alive. The Gauchos got off to a hot start as a layup by Brance gave them a 20-16 lead with 10:40 remaining in the first half. However, the Rainbow Wahine answered back with a 14-0 run, eventually taking a 30-23 lead into halftime.

A pair of free throws from freshman small forward Taylor Farris capped an 8-0 run by UCSB, pulling her team within a bucket at 30-28, but once again, Hawaii pulled away, going on yet another 14-0 run. The Gauchos managed just 13 points in the second half on 5-23 shooting as they fell 60-36.

Jemerigbe paced her team with another solid offensive performance, going for a game-high 14 points on 5-6 from the field and 2-2 on threes. Hawaii saw only one player scorer in double-figures, but shot a proficient 47.1 percent from the field as a team. Junior guard Destiny King led the way with team-highs of 11 points and nine rebounds.

Seniors in center Clair Watkins and Kristine Brance played their final college games this past weekend, leaving a young UCSB team that will looking to bounce back after a disappointing season.