The Daily Nexus
News
A.S. Hears from Candidates Planning on Running
March 6, 2015 at 2:00 am by Cheryl Sun 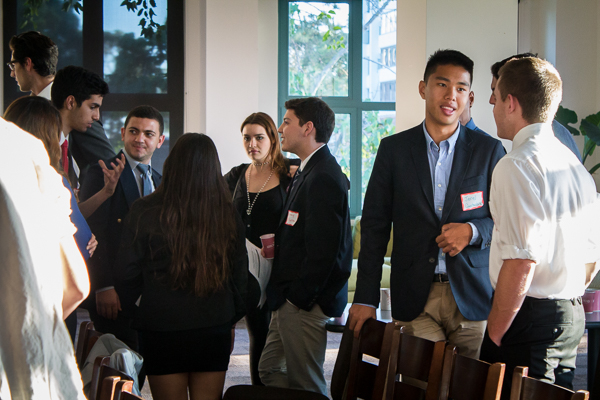 Third-year history of public policy major running for A.S. President with OPP Jimmy Villareal said one major project he was involved with last year was a general poll that allowed students to give input to A.S.

“An effort that I was kind of a part of was the Associated Students strategic plan, and that was basically something I did last year,” Villareal said. “We took surveys from over 1,800 students, kind of asked them what they wanted to see from us, what does A.S. do well, what does A.S. not do well, how can we improve and what do they want to see from us in the future.”

According to Villareal, his main goal is to anticipate and cater to the wants and needs of the student body.

“That’s really what I want to focus on, is what kind of services we’re providing for the students, how can we take the services that we had already and make them better,” Villareal said. “How can we be more efficient with those, and how can we identify things that students really want, that we aren’t providing already, and find a way to do that and make it feasible.”

Third-year political science major running for A.S. President with FTP Jason Garshfield said he is running in order to provide students with an option to choose a candidate that is “a little closer to the average students and their wants and needs.”

“I want the students to have a choice this year. I think it’s disappointing that there’s only one political party and I thought that to remedy that situation I would run,” Garshfield said. “I haven’t been building up my resume for three years and I think that makes me a unique candidate, as opposed to people who have been devoting themselves to A.S. and don’t really have any other interests.”

According to Garshfield, he would place greater importance on protecting students’ rights as opposed to forcing his agenda on them.

“I think the changes that I implement would be a subtraction rather than addition because I think that ultimately my job as A.S. president is not to force my agenda on the students. My agenda is to protect the fundamental rights of the students and to treat everyone as an individual,” Garshfield said. “If that involves subtracting some things from the office and subtracting the power of the president, then I will definitely do whatever’s in my power to do so.”

Third-year sociology major running for IVP with OPP Kimia Hashemian said she wants to bring back a system called Gaucho Rewards in order to increase student participation at university and Isla Vista events.

“It’s a program to increase attendance to the different events we have on campus,” Hashemian said. “Go to a sports game and get 50 points, if you go to town hall you get 100 points, and these points can be redeemed for cost-free things, such as going up Storke tower, or having lunch with the A.S. president, something like that.”

Second-year history of public policy major running for EVPLA with OPP Paola De La Cruz said her main focus would be to address issues concerning housing, sexual assault and community building on campus and in I.V.

“I am running because I want to improve the quality of life of students in Isla Vista, and really voice concerns and experiences that I went through,” De La Cruz said. “I really want to work towards creating some temporary housing on campus; then for sexual assault I want to develop and execute a campaign to battle sexual assault in Isla Vista.”

Third-year political science major running for EVPLA with FTP Brandon Morse said medical marijuana dispensaries in I.V. could be beneficial in generating revenue for self-governance and other community-based purposes.

“I think the one thing we’re missing out on is revenue streams as far as the cannabis industry,” Morse said. “I think that there are a substantial number of medical cannabis patients in the Isla Vista area, and the fact that we don’t have immediate safe access for patients is a travesty, and it is also something that we’re lacking as far as a potential revenue source to be able to support things like self-governance.”

Third-year sociology and black studies major running independently for EVPSA Mohsin Mirza said he hopes to address the issue that “the cost of school is going up while the quality is going down.”

“I am running because we’re at a crossroads right now in higher education. The cost of school is going up but our quality is going down,” Mirza said. “As part of my platform I’ve got several things. The first is mobilize students against the tuition hike through educational actions leading to actions to put pressure on the governor to fund the UC’s more.”

“One of the things I did in my second year was I put on a weeklong event called the week of revenue. It talked about student debt, how student debt has risen in the last years, and a couple of things that we can try to fight the rising and tuition,” Lopez said. “So I’m hoping to have something every single quarter to try to engage students more.”

Third-year political science major running independently for SAG Jorge Escobar said few people know about the SAG office, and publicizing their service would be one of his priorities.

“The office of the Student Advocate General is relatively new, people don’t know us, but we’re a great resource on campus,” Escobar said. “One thing we want to work on is solidifying the office, making sure that we progress. We’re still learning, we want to be able to utilize our resources better.”

Third-year global studies major running independently for SAG Anais Zavala said the office gives advice and helps students with “anything that has to do with campus policies.”

“If you get written up in the dorms, plagiarize, break a student code of conduct, we know what to refer you to or we can just give you advice on what to do,” Zavala said. “That’s something that I’m really familiar with, and I’d just like to let people know more about our office.”