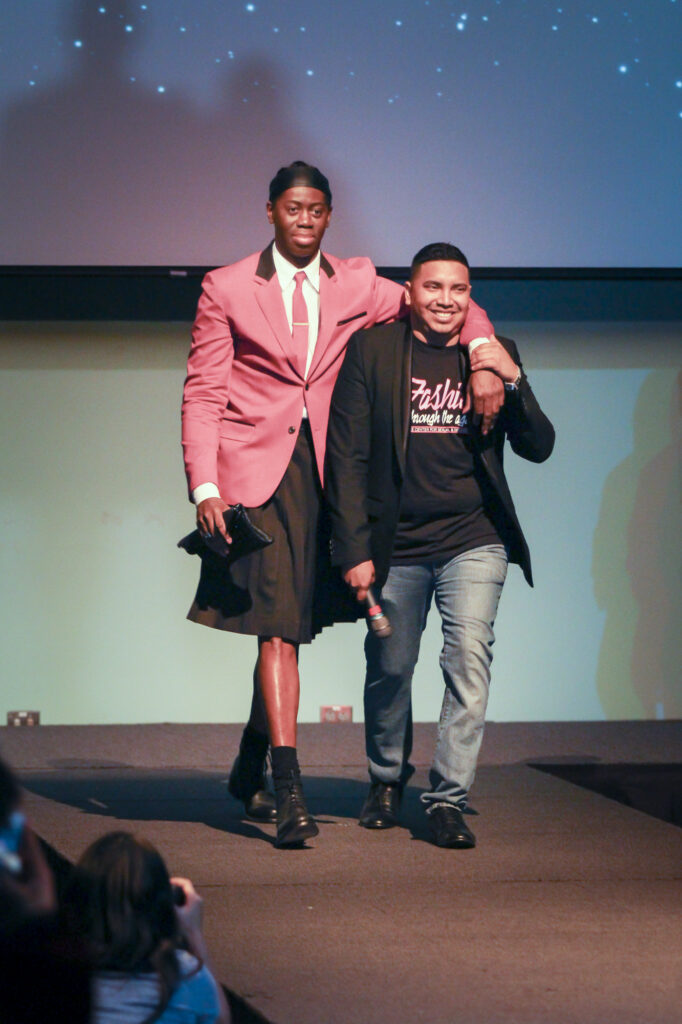 A unison choir of “yassssssss” burst from the audience in Corwin Pavilion last Thursday, Feb. 26, when a tall, dark and powerful figure appeared on the runway. The famous legs strutted down the catwalk wearing a black pleated skirt paired with a magenta, classic blazer suit, and the entire room went hysterical. The special guest at the Resource Center for Sexual and Gender Diversity’s annual fashion show was none other than “America’s Next Top Model” runway coach and judge, Miss J Alexander.

To hype up the show, the staff at the RCSGD made viral online campaigns and got over 500 Facebook RSVPs and 300 likes on UCSB’s Instagram page. At 7:45 p.m. on the regular school night, a massive line formed from the door of Corwin Pavilion, all the way to Davidson library’s parking lot. Unfortunately, many of the eager “Top Model” fans were turned away when the pavilion quickly reached its capacity before the show’s starting time at 8 p.m. Those who were lucky enough to grab a seat or a spot in the standing room were in for a special treat.

In an exclusive interview with the Daily Nexus, the runway legend shared his excitement to be in Santa Barbara. “It’s absolutely beautiful. It’s a really nice resort town but it’s quite beautiful. The weather is scrumptious and yummy,” Alexander said. “I can’t wait to see what the students are going to put on. The love in this university is absolutely just heavenly.”

Titled “Fashion Through the Ages,” the show focused on three themes of a periodical age: past, present and future. But before fellow Gaucho models made their way down the runway, Alexander sat down and gave the audience a few special tips to go far in their careers. “The most important thing for everybody in this room is to say ‘Yes, may I, thank you, please’ because manners can carry while money cannot,” the model coach said.

Born in the Bronx, New York in 1958, the future runway star first became a model when he met Monique Pillard, the president of the esteemed Elite Model Management. The meeting led the New York native to walk in a show for legendary fashion designer, Jean Paul Gaultier. From his early networks, the young model befriended supermodels such as Naomi Campbell and Tyra Banks, who later recruited Alexander to be a part of her new reality TV competition, “America’s Next Top Model.”

“We start filming on the 19th of March,” the reality star menially shared when asked about the new season, which he joked as “cycle 22,983,” after having done so many. After sharing some more funny anecdotes and inspiring advice, Alexander gave catwalk lessons to some very lucky audience members. It led to a walk-off competition where both boys and girls got the opportunity to strut, werk and “serve it for the gods,” while being judged by the legend himself.

Everything thus far was barely the appetizer to the grand entrée — the fashion show. The house lights dimmed, photographers held tight onto their cameras and the bass dropped … the show was finally upon us. Starting with the theme “past,” outfits invoking the spirit of the ’20s jazz age, ’60s flower child and Madonna’s “Like A Virgin” strutted down the runway in a fierce way. During the “present” theme, models wore androgynous-inspired suits and sexy cocktail dresses. Even a few fraternity brothers of Phi Iota Alpha modeled the latest styles from Men’s Warehouse. For the “future” theme, silver makeup, outrageous hair and extraterrestrial designs adorned the runway.

After all the models had strutted in front the audience, it was time for the RCSGD’s staff to take the runway. The “Top Model” judge then climbed back on stage, took one last #RunwayRealness walk and thanked the audience and the RCSGD staff for putting on the wonderful event. Claps, snaps and yells once again ignited the room and the audience walked away from the show with an extra spring in their step … all thanks to Miss J Alexander.

Bin Nguyen took a selfie with Miss J, walked the fashion show and lit a cigarette on the runway. 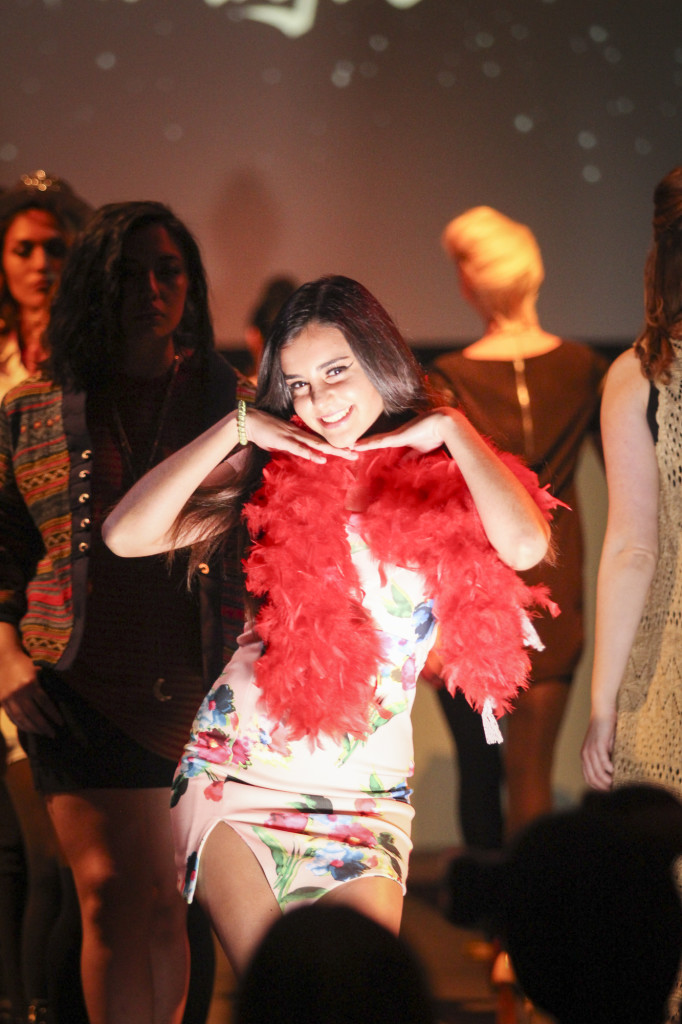 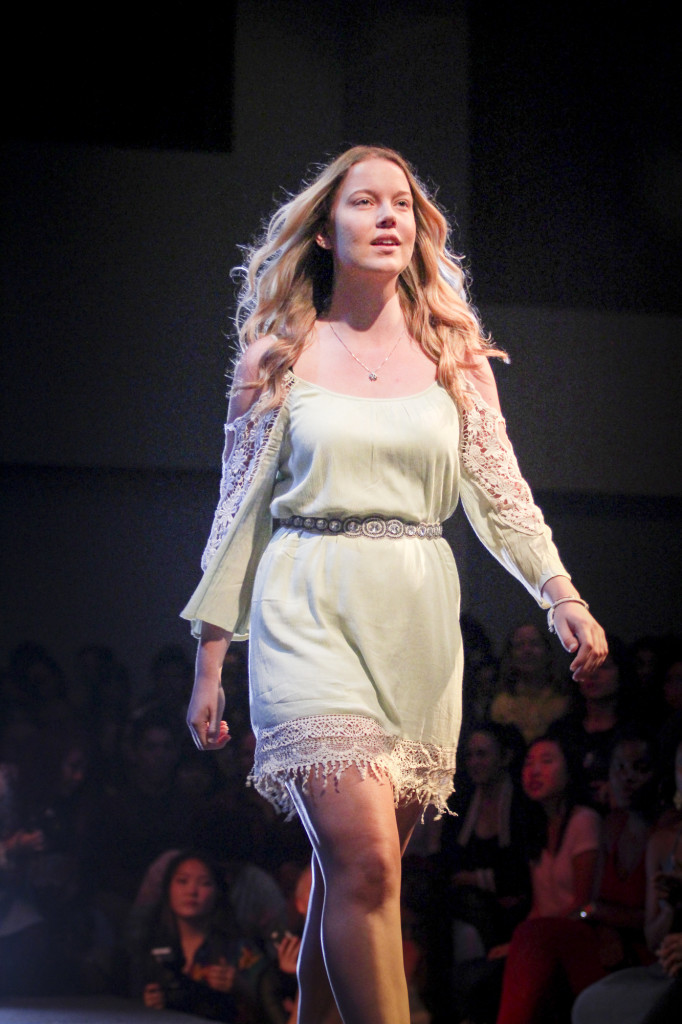