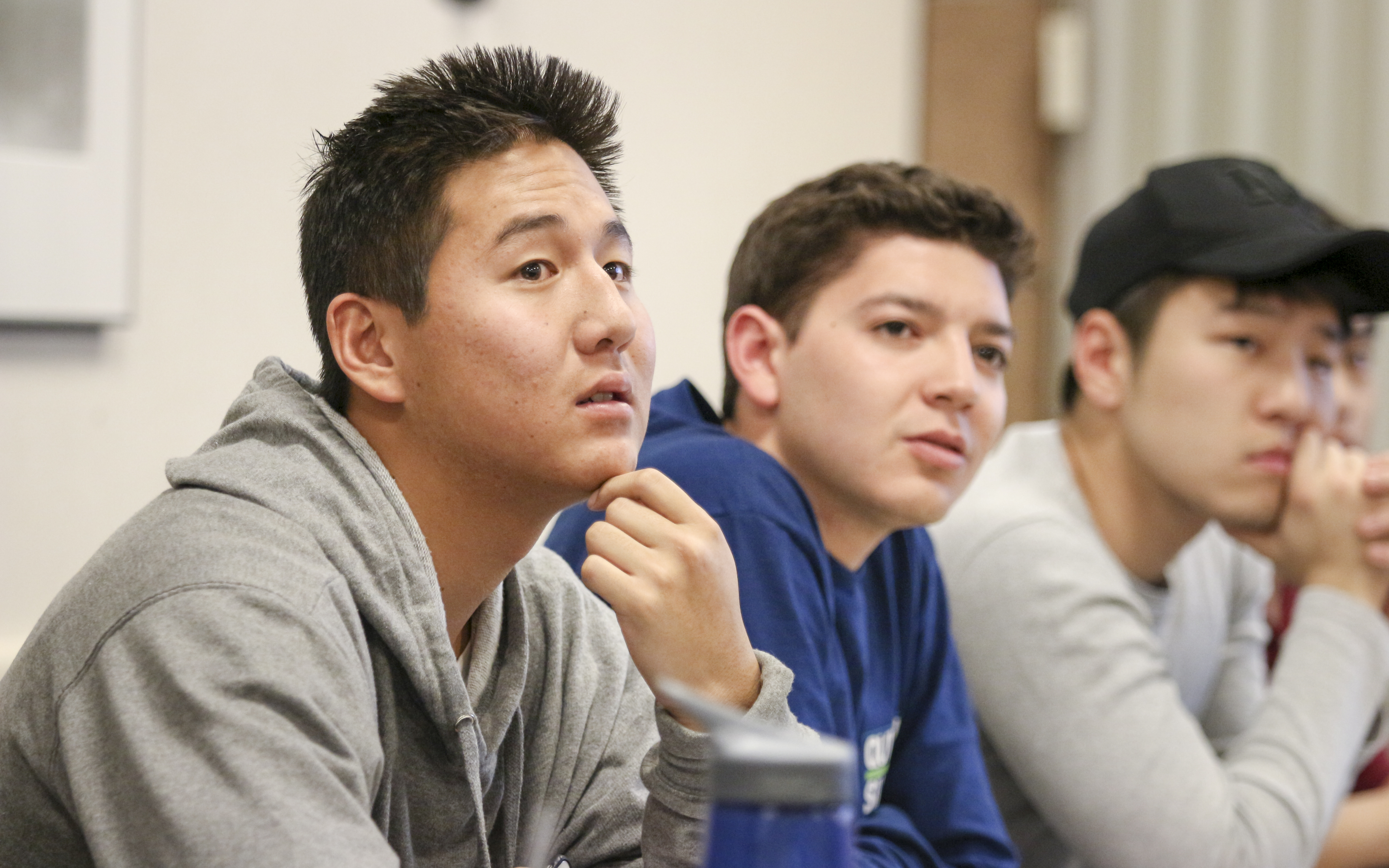 A.S. Senate meeting proposes A.S. Program Board concert during Deltopia at beginning of spring quarter, comes back to the 24-hour café in library and plans for upcoming trip to Ferguson, Missouri. McLane Brown/Daily Nexus

The Associated Students Senate had their last meeting of the quarter last night in the Flying A room at the UCen where senators discussed alternative programming for the anticipated Spring Quarter event Deltopia, increased funding for mental health services at all UCs and passed several bills and a resolution.

Bills passed included a bill to incorporate Isla Vista Arts into A.S. and a resolution to examine the feasibility of an A.S.-administered street cleaning and repaving program for I.V. The Isla Vista Arts bill authorized the creation of an administrative unit of A.S. to oversee artistic projects in I.V.

A.S. Community Affairs Board (C.A.B.) member Jeremiah Copeland discussed the organization’s plans for an upcoming alternative spring break trip to Ferguson, Missouri, where students will conduct community service and attend educational workshops. Copeland said C.A.B. had 170 applicants apply for alternative break this quarter — the most the organization has ever had — and settled on 12 participants.

“We just finalized our paperwork, we will be going to Ferguson for spring break. It will be one-third traditional community service, one-third civic engagement, and the last third will be attending workshops,” Copeland said. “We will be going with BSU [Black Students Union]; they’re sending a 15-person delegation as well, so we’re really excited to work with them.”

A.S. Program Board commissioner Benjamin Simons said Program Board plans to hold a concert during Deltopia and praised university administration for their cooperation with Program Board efforts.

“We will, in fact, be having a show on Deltopia night in the Thunderdome, the artist will be announced later. We will be selling five-dollar tickets just like we did for Halloween. Tickets go on sale when we get back from spring break,” Simons said. “I’m really, really hoping that this is the stepping stone that we need to solidify this type of interaction happening where the university sees the problem and asks, ‘How can we help?’”

Simons also discussed conversations he has had with the UCSB Police Department (UCPD) following musician Mac Demarco’s detainment at the Hub during his Fall Quarter concert. According to Simons, Program Board is working to use more private security at concerts with less police enforcement in the future.

“I attended a meeting with UCPD as well as all vending managers to discuss the events that happened last quarter,” Simons said. “It was a very difficult conversation, but what I got out of it was some progress. It seems like concerts now will see more hired security rather than the police.”

Senator and UCen Governance Board member Zach Goulhiane updated the Senate on the introduction of a 24-hour café pilot program in the library during dead week and finals.

“The 24-hour café starts next Monday and goes through finals on Thursday,” Goulhiane said. “So it will be open until 6 a.m. and will be closed for two hours for restocking and then will open up again.”

“The feeling that I’m getting from the university is that their response is trying to pull students out of Isla Vista onto campus during Deltopia,” Schunk said. “I think a large part of that strategy is so that UCSB students won’t be getting in trouble, arrested, et cetera.”

Schunk also discussed the EVPLA office’s interactions with local police and his proposals to encourage a safer Deltopia, including police-issued warnings to party hosts to prevent large crowds from forming.

“What we asked was for the police to come by before the parties need to be shut down to provide warnings to all the students and then shut down parties at random so there isn’t a huge mass of people at one end [of Del Playa Drive],” Schunk said.

The Senate also passed two bills with no conflict: a Bill to Incorporate Isla Vista Arts into ASUCSB and a Bill to Further Revise AS Legal Code Table of Contents.

The Board said they will fund Isla Vista arts and culture programs including WORD Magazine, Isla Vista Arts BOX, Shakespeare in the Park and Nuestra Voz.

On the Bill to Incorporate Isla Vista Arts into ASUCSB, Senator and second-year history of public policy major Cassie Mancini said she was excited for the adoption of the program.

“Hopefully we’ll have a new unit,” Mancini said. “We worked really hard on this bill. There’s been a lot of discussion about it.”
A bill on A.S. legal code passed with no discussion.

Finally, after some modifications, the Senate passed a winter honoraria allocation of $48,579.

A version of this story appeared on page 5 of the Thursday, March 5, 2015 print issue of the Daily Nexus.