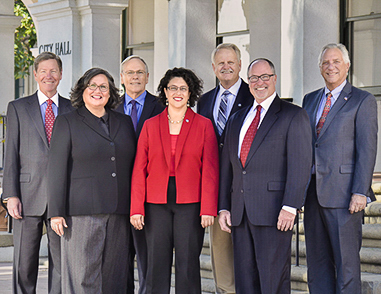 After settling in a lawsuit alleging unfair voting practices, the City of Santa Barbara is looking to change how voting is done in the county. Photo Courtesy of Santabarbaraca.gov

The City Council of Santa Barbara is drawing up new electoral boundaries with community input and will begin implementing by-district elections starting November 2015 as a result of a partial settlement of litigation citing violation of the California Voting Rights Act (CVRA).

The litigation, Banales et al. v. City of Santa Barbara, alleged Santa Barbara’s voting systems for electing city council members violated the CVRA by creating a system where Latinos are marginalized in the voting process. Candidates are chosen individually as opposed to being a representative of a geographic area for voting systems where city-wide elections are held.

The City of Santa Barbara and the plaintiffs agreed on a partial settlement which will require city council to design six new voting districts, though the city has not admitted to a violation of the CVRA. Two of the new districts, who’s boundaries will be predetermined, will be “majority-minority” districts in which Latino voters will be designated as a majority. Three of the six districts will be electing their representatives in the November 2015 general election. The city council is looking for public feedback and held the first of four public forums on Saturday to discuss potential district designs.

According to the initial legal brief, despite the City of Santa Barbara’s almost 40 percent Latino population, the presence of only a single Latina elected to the council in the last decade is part of evidence suggesting Latino voters lack access to the political process.

“We hired our own demographer to see if we had the actual numbers … and we did,” Banales said. “It showed that there was voter polarization in the city of Santa Barbara, voter dilution of Latino votes.”

City attorney Ariel Calonne said a definitive conclusion on whether or not there was a vote dilution can only be reached after trial. He also said that because of the settlement, there will be no admittance to the accusation.

Calonne said the change from at-large to by-district elections is a huge alteration, and city council is holding four public meetings to gain input, starting the end of February through the end of March.

“The council recognizes that this is indeed a massive change in city government and in the political structure of the city,” Calonne said. “So these four workshops are really intended to bring out as much public participation as we can have.”

According to Banales, the city is saving over two million dollars by settling the litigation, because the plaintiffs were certain they had enough evidence to win if the lawsuit went to court.
“The city is going to settle this for about six hundred thousand dollars, if we went to court it would probably cost the city three million dollars,” Banales said. “We wanted to settle to save the city money but if they wanted to go to court we were very confident that we were going to win the case and I think the city recognized that.”

Researcher and Community Organizer for Central Coast Alliance United for a Sustainable Economy (CAUSE) Lucas Zucker spoke at the district planning workshop on Feb. 28 and said even-year elections are a better option to hold elections because of financial benefits, increased voter participation and overall increased representation.

According to Zucker, even-year elections would promote greater representation among the Latino community because the lack of presidential and midterm elections during odd-years consistently results in low voter participation.

Education Fund director of the League of Women Voters of Santa Barbara Shane Stark said there are inevitable transitional problems that will arise during the change in political structure.
“What I want to address to the council and city staff is do not neglect the transition issues,” Stark said. “I think it would be well served to have some sort of task force to look at all the various questions and consequences that are likely to come up when they integrate the rest of the city government.”

According to Stark, city council should start a task force to deal with communication complications that are bound to occur.

“With this district system, give serious thought to how you appoint commission members and how the lines of communications are because there are going to be issues that come up and I urge you to get on top of them,” Stark said.