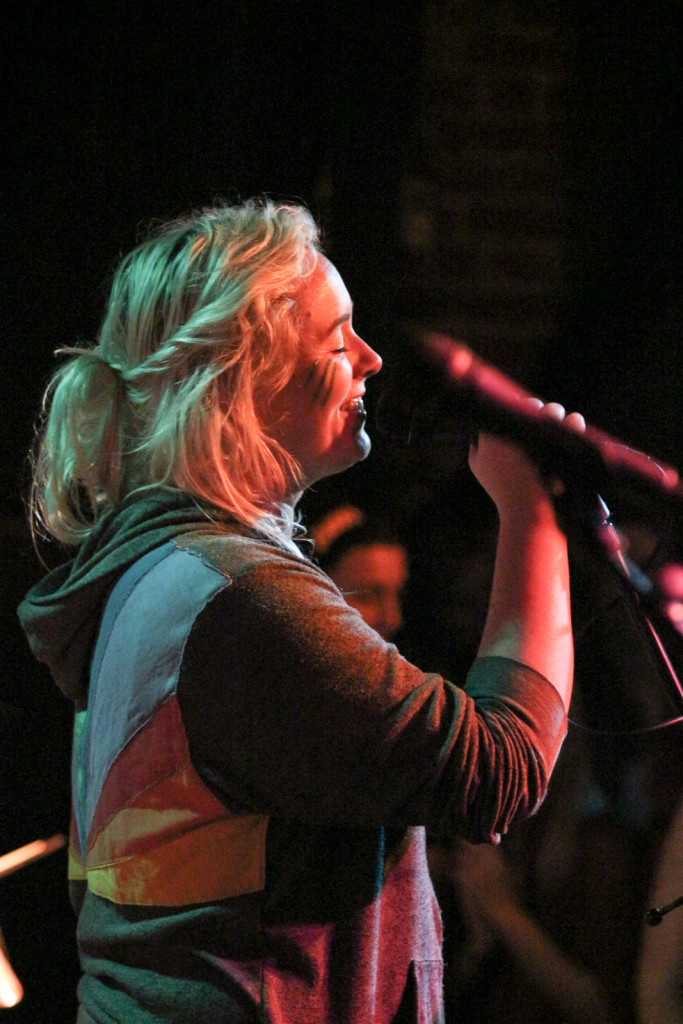 A blond gal stood on the SOhO stage in leggings and a heather gray zip-up hoodie, doling out turquoise paint on the cheeks of giddy girls. “You, you’re next,” she said, moving from lady to lady until at least 40 Wild Child fans had spruced up their faces with three turquoise lines.

Unbeknownst to some, the night’s face painter was lead singer/violinist of folk pop group Wild Child Kelsey Wilson, dressed in the most casual garb that has graced SOhO’s stage in months. But the thing about Wilson is that she gives zero fucks if her hair is in a messy bun on the top of her head or if she’s not wearing the tight, black motorcycle jacket that makes every female look sexy. Wilson keeps things casual with minimal eyeliner, bare feet and, of course, the turquoise paint on her cheeks.

“My whole life, face paint has been my jam,” Wilson said in an interview after the show. “First it was mud, then marker, then Sharpies, then acrylic paint … I did it a long time and it was weird, [especially] in high school.”

For the Texas native, face paint is almost a way to keep herself in check. “It reminds me to just not give a shit. Because it doesn’t matter. It doesn’t matter if you have dirt smeared on your face or paint. All it’s going to do is weed out the people that care about that kind of stuff, and that’s fine,” Wilson said.

It certainly did not weed anyone out in the SOhO crowd, who clamored for a bit of colored cheeks during the wildly fun night. Wilson and male lead singer/ukulele expert Alex Beggins kept the performance casual, as if singing amongst a very large group of friends. Wearing a striped shirt and an impressively thick mustache, Beggins had a French-painter thing going on. But then he’d open his mouth with a drawling quip like “I feel good, I feel real good, I feel make love-good,” and any sophisticated preconceptions faded away, replaced with the warm fuzzy feeling of grooving with a silly kid in a playground.

Indeed, comparing Wild Child to silly kids would not be inappropriate; they made the venue their playground, moving into the crowd to sing a cappella and snapping photos with fans long after the show ended. And calling them “silly” is not to suggest a sense of unprofessionalism, but rather highlight the six-piece band’s endearing, always-joking, always-smiling performance.

“Even if the show sounds bad, even if the music isn’t good, if the band is smiling, I will watch them play for hours,” Wilson said. “Smiling is contagious. If you’re up there having a good time, even people who don’t know your music will have a good time. That’s our basic show principle.”

Conducive to their bubbly disposition, Wild Child enjoys pulling people onstage, whether they’re part of the tour or from the audience. Opening acts Desert Noises and Goodnight, Texas flooded the stage more than twice to join the soirée. The bassist from rock band Desert Noises tapped his fingers on Wild Child bassist Chris D’Annunzio’s instrument, while the boys from stomp rock group Goodnight, Texas slow-danced like it was prom. “We’re going to keep doing this family style,” Wilson said onstage halfway through the show. “So stay close.”

This kind of collective, impromptu performance made the night feel especially warm. Jessica Echavarria, a graduate student at Cal State Fullerton, has been to three Wild Child shows in this last tour, and has been onstage twice. “I absolutely adore Wild Child. They’re just so welcoming,” Echavarria said, her phone lit up with a picture of her and Wilson onstage at the Roxy Theater. “They treat you like you’re a human being; they sit next to you like it’s nothing. Most bands won’t do that. Most bands won’t get offstage and mingle with you.”

Echavarria’s favorite song by the group is “All The Years.” With lyrics like “I can’t think of a better thing than growing old with you/ You, you know I need you by my side,” the song is a nice sample of the relationship and love themes that run through albums Pillow Talk and The Runaround. Word has it that Wilson and Beggins met each other at a time when both had gotten out of a serious relationship, which caused much of their songwriting to fall under the realm of love.

When they sang sweet tunes like “Stitches” and “Pillow Talk,” it was easy to think Wilson and Beggins are in love. The two work like magic — Beggins leaned over to kiss Wilson on the cheek, to which she playfully teased “Alexander you’ll give me cooties!” — but a fierce sense of friendship and camaraderie overrode the flirtiness. “I think that they’re in love, but their kind of love doesn’t have to be intimate,” Echavarria said. “There’s something spiritual about music, and their souls come together so nicely. Whether or not they’re together, their songs are so deep that my heart is broken with them.”

And that’s the magic of a band like Wild Child; their music falls into great depths of emotion, and yet they remain a bundle of fun to watch onstage. It’s the best of both worlds: a tangibly spiritual connection and a rioting good dance time. Topped off with a nice dollop of turquoise paint, of course.

To listen to Wild Child, go to soundcloud.com/wildchildsounds.