The Daily Nexus
News
Humyn Rights Board, Students for Justice in Palestine Host Talk
February 27, 2015 at 1:59 am by William Leiva 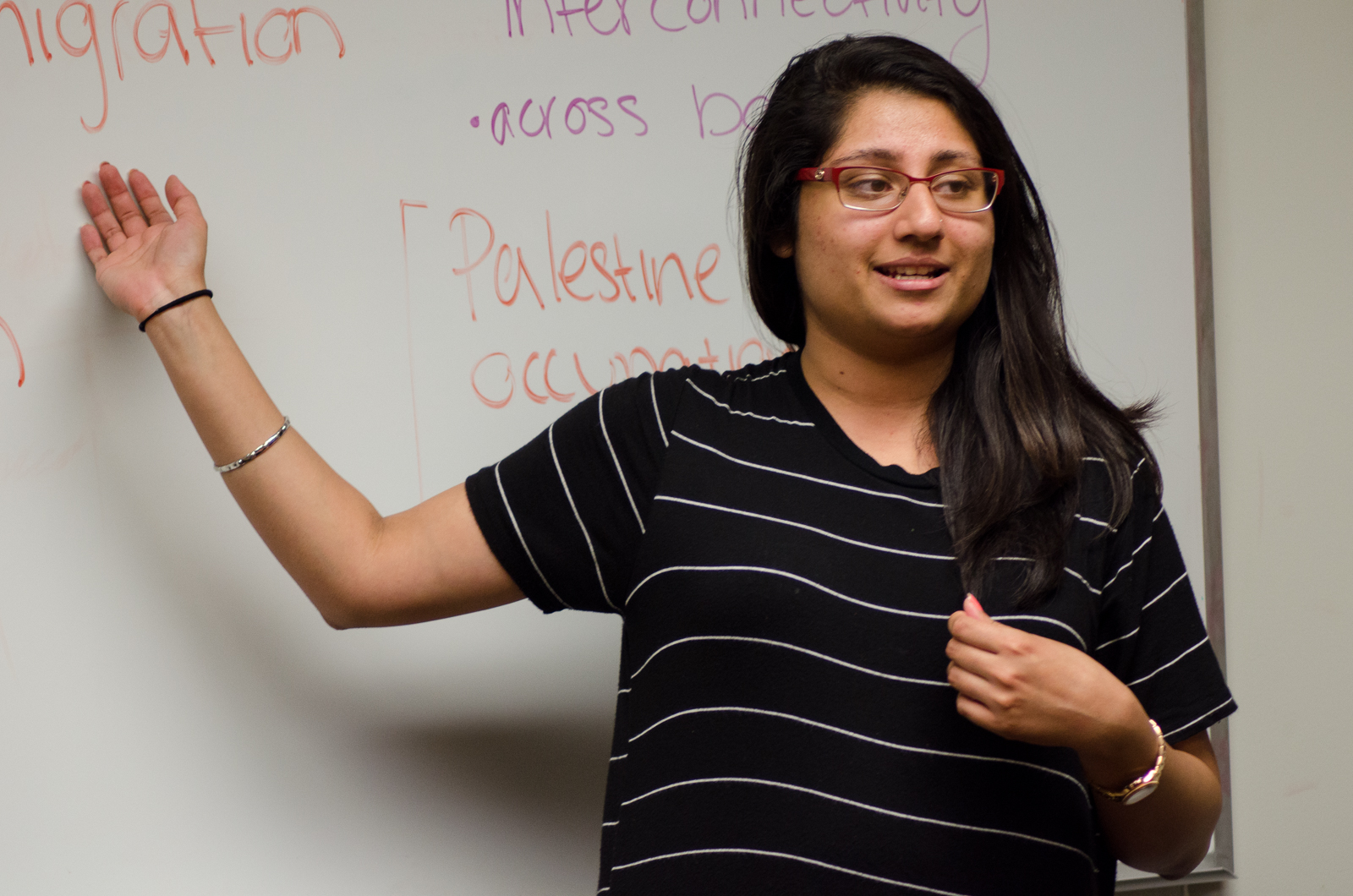 Anumita Kaur facilitates a group discussion on the intersection of Palestine and other human rights issues. Sam Aragon/Daily Nexus

Presented by Students for Justice in Palestine (SJP), the event was centered on a theme of Transnational Solidarity & Advocacy for Palestinian Humyn Rights and focused specifically on solutions for state violence, native culture pertaining to Israel and advocacy for Palestinian human rights such as immigration and women’s rights. SJP President and second-year sociology major Anumita Kaur was the main speaker for the presentation and began the event speaking about the many ways in which Palestine is affected by the occupation and apartheid of the region, as well as the U.S.’s relationship with the conflict.

According to Kaur, the problems in Palestine span a wide range of humanitarian issues that transcend the political motives controlling the region.

“In regards to Palestine, it connects to women’s issues, queer issues, environmental problems, state violence, immigration and displacement of indigenous populations,” Kaur said. “It goes beyond transnational borders because it is much more than people perceive. It does not just affect one group of people with one issue.”

Kaur said the Ferguson, Missouri, shooting case of Michael Brown in the U.S. is directly tied to Palestinian oppression because the Israeli Defense Force (IDF) trained some members of the American police force who were active in Ferguson.

“The government in Palestine is super fearful of public opinion and resistance. But the IDF trains the police in the U.S. to have the same fear,” Kaur said. “It is connected to the Ferguson issue because the police here are trained to oppress resistance at all violent costs. It was a case of rampant anti-blackness.”

According to Kaur, police brutality leading to the death of innocent people is modeled after “the hatred and strategy of the Israeli army.” Kaur said the strategy stems from the fear of possible opposition, aiming to abuse people from the lower class and encouraging the marginalization of these people in a consistent manner.

“I identify as Afro-Cuban and I realize that my people are and have been dominated and oppressed,” Mitchell said. “This is what happens in all lands. Therefore, it is so clear for me to see how it is impossible to take away issues like women oppression because of interconnectivity between dominance and exploitation.” 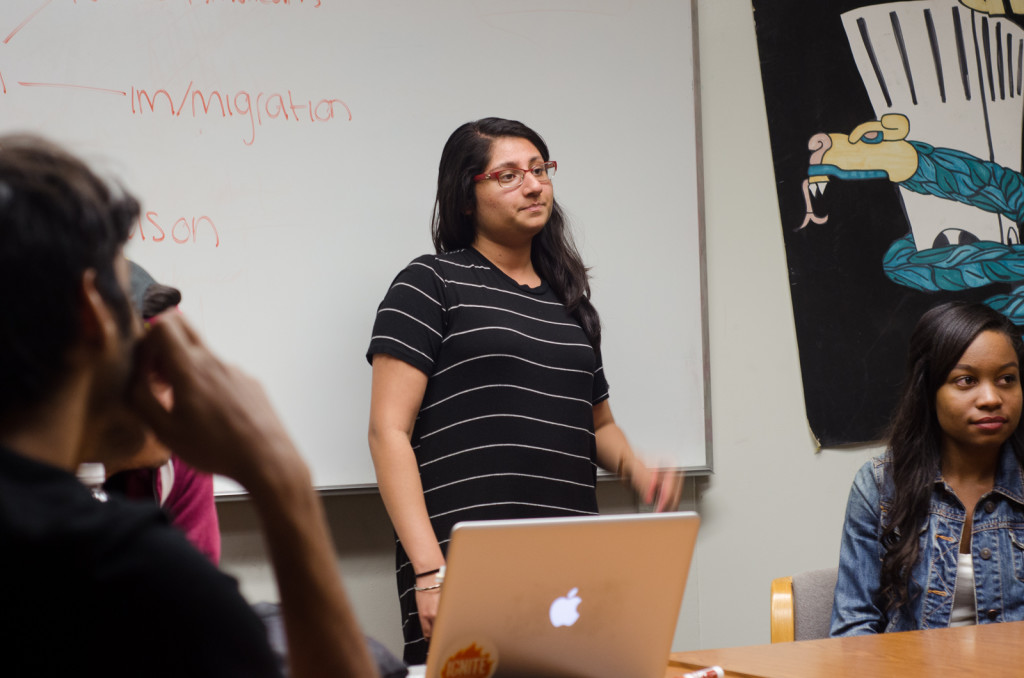 Anumita Kaur facilitates a group discussion on the intersection of Palestine and other human rights issues. Sam Aragon/Daily Nexus

According to Kaur, oppression against women continues to exist in Palestine as it has in the U.S.

“The sad truth is that women have always faced oppression,” Kaur said. “It has existed in the past here in America, as we all know, and continues to happen in Palestine. Women have very little rights there and this will unfortunately most likely continue.”

“All forms of racism are not the same around the world. For example, we see in the Ferguson case that there is discrimination against blacks,” Garza said. “There are also a lot of African immigrants in Israel and they are not given documentation, rights, work, and are only provided with segregation.”

According to Garza, African women are being sterilized in Israel because the government wants to control the population.

“These women are not provided with equal rights but are being sterilized which is an example of how the government controls their people,” Garza said. “This is a tactic that the U.S. has used plenty of times in South America and with Native Americans.”

“There is a lot of unfairness in Palestine, especially with the issue of sterilizing women at checkpoints. Women are being sterilized but do not get to experience medical attention and it is definitely unfair for Palestinians,” Mooraj said. “They do not have access to medical aid in Gaza which is a denial of life. There are no ambulances or speedy recoveries.”

Mooraj said his immigrant lifestyle in the U.S. is much easier than the life of Palestinian immigrant because he is granted basic civil rights and allowed to travel.

“I am an international student myself and cannot imagine the troubles that immigrants face in Palestine,” Mooraj said. “The restriction of movement of the Palestinian people is wrong because they have been there for years and are denied public services. I fortunately have not faced such discrimination in the U.S. so far as an immigrant student.”

According to Mooraj, people should be allowed to relocate and travel in their search for suitable living conditions.

“At the core, this is really a human rights violation because people need to have the right to move around and find comfort,” Mooraj said. “They need to be able to grow and expand. People in Gaza and the West Bank just do not have that and I find it to be completely awful.”

If you spell human wrong, 99.99% of the population will laugh at you and then subsequently hate and dismantle your cause.

Don’t be fools or your cause will fail as it always has. You think you are clever but you are really young, sexist, and stupid.

“99.99% will laugh and subsequently hate the cause” huh? Really? It’s not spelled wrong. It’s spelled differently to emphasize that women and men are individual, equal human beings. Your claim to hate the cause because of the spelling is ridiculous. You hate it because it goes against a system of oppression that you benefit from and have no desire to change. Don’t try to mask that behind some petty grievance with a spelling, jackass.

b
Reply to  Sam

We will never see true gender equality in this country until men and wiomahns can spell the name of their gender differently!

Given that you support the Palestinians who openly advocate Jewish genocide (see their duly elected leaders clear-cut party covenants), you correspondingly do as well. It’s hard to believe in this day and age that anyone would openly advocate the liquidation of Jews, but you clearly do and it doesn’t seem to bother you a whit. Moreover, it would be hard to believe that anyone would support second class status for women, the honor murder of teenage girls, the brutalization of gays and the suppression of dissenters. But you, as supporters of the Palestinians who regularly practice all of the above,… Read more »