The Daily Nexus
Sign of the Times
Why Jeb Bush Might Just Be the Next POTUS
February 24, 2015 at 7:05 am by Josh Ortiz 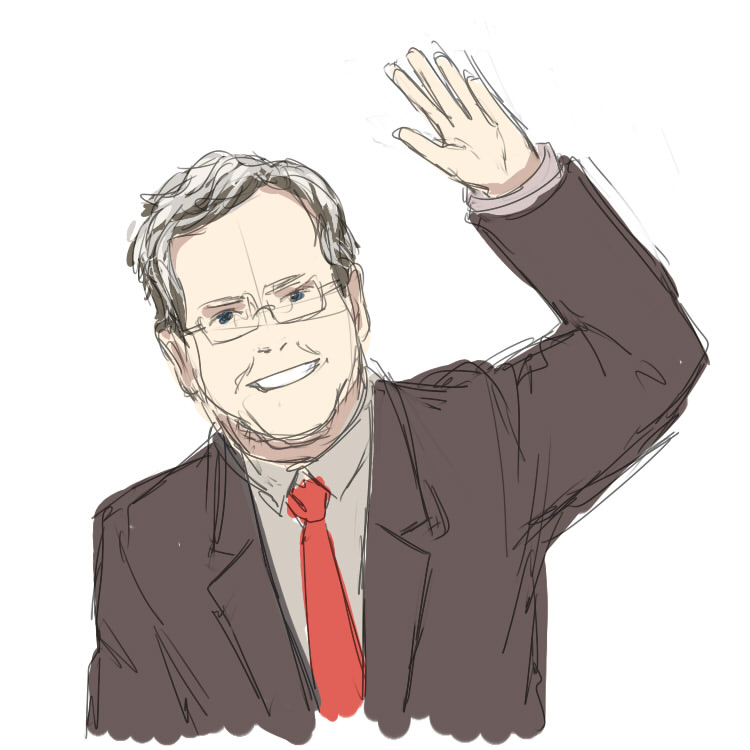 If you thought that the history of the United States executive office just wasn’t Bushy enough for you, you might be pleased to hear that Jeb Bush may very well be Barack Obama’s successor in 2016.

With Obama’s administration coming to a slow, kinky halt — as most administrations do — the time has come for new presidential candidates to rise up to the task. Yes, the season has arrived where we fall victim to in-your-face television advertisements and impromptu political debates at the family dinner table.

The list of potential candidates is long for both Republicans and Democrats, but only a few names stick out. Vice President Joe Biden, believe it or not, has expressed interest in moving up the ladder (but that just might be a whole bunch of “malarkey”). And don’t doubt that Chris Christie is spending every bit of spare time he has on a treadmill to look “presidential.” Of course, Hillary Clinton has been campaigning for presidency practically since the nineties, and she is more than ready to move her furniture into the White House in 2016.

However, former Florida governor Jeb Bush will be the one to soar to the top in this next presidential election.

He’s got presidency in his blood. With George H.W. “Daddy” Bush as his father and George W. “Baby” Bush as his older brother, there is no question that the Oval Office is a family affair for the Bushes.

What does that mean for winning an election?

Endorsements. In the near future, we will be seeing endless endorsements from the two former presidents buffing up the image of Jeb, saying things like “I raised my son up to be a good man, and I know he will make a great president” or “I admire all the great things my brother has done in Florida, so he is a strong presidential candidate.”

A good candidate needs endorsement — just look at how Obama utilized the loving power of Bill “Slick Willie” Clinton to get ahead in the polls in 2012. Jeb has exactly that, except times two.

The reputation of any of these former presidents won’t particularly matter in this case because they carry the weight of having the prestigious experience under their belt. They are credible because they know what the office requires, so voters will undoubtedly be listening to them closely in 2016.

Also, Jeb Bush will win a large amount of the Electoral College vote in the primary election. He is the only Republican to serve for two full terms as governor in Florida. Already, he is polled to have an entire third of the Florida Republican vote for the 2016 presidential election. On top of that, presidential candidates almost always win their home states.

There is no question that Florida will go to Jeb, which is a lofty 29 points toward the needed 270 Electoral College points. Don’t underestimate the power of Florida. Let’s not forget how George W. Bush was able to narrowly defeat Al Gore in the 2000 presidential election because of Florida.

Jeb Bush will win the presidency because he will be able to capitalize on the mistakes made by the Republican Party in the previous presidential election.

Mitt Romney was not the candidate to win the executive office in 2012 for almost one sole reason: He couldn’t get the Hispanic vote.

Jeb Bush will win the presidency because he will be able to capitalize on the mistakes made by the Republican Party in the previous presidential election.

Hispanics and Latinos make up 16 percent of the nation’s population, and that figure is set to double by 2050. Their votes are enough to swing an election, and in 2012 they swung left. That’s why Obama is currently draining three-pointers on the White House basketball courts while Romney sits in his multimillion-dollar vacation home, lamenting what could have been.

Romney’s views on immigration policy angered a lot of Latinos. Mexican immigrants, for example, found it difficult to connect with his belief in “self-deportation,” where the government provokes immigrants to voluntarily leave the country by refusing to give them work.

This view is a bit more dramatic than what mainstream Republicans want out of immigration policy. Jeb Bush is a bit more lenient. It isworth noting that he has a bachelor of arts in Latin American studies from the University of Texas, and he is fluent in Spanish. In general, however, it’s hard for Republicans to be popular with Hispanics when it comes to immigration policy.

Actually, it’s hard for Republicans to be popular with Hispanics unless you’re Senator Marco Rubio. The champion of the GOP, Rubio is a shoe-in for Hispanic votes.

And that is why Jeb will skyrocket to the Oval Office. When the time for the primary election comes this time next year, Jeb will ask the young, handsome Latino senator to be his running mate. Rubio, no doubt, will say yes so that he can build his own résumé for a future presidential election (but that’s another story in and of itself). With Rubio as the vice-presidential candidate, Jeb Bush is formidable, and the Democrats know it.

What may also work out for the Jeb is the fact that he is a Bush, and with that comes all the implications of Bushiness. George W. Bush, if you will remember, marketed himself as a common man. Back in the early 2000’s, Baby Bush would get dressed in his Wrangler jeans, put on his tallest cowboy hat, and go out for a Sunday drive in an American-made pickup truck, making sure that the cameras were there to see it. All the while, America seemed to forget that he was a Yale-educated millionaire out of Connecticut, and thus he won two presidential elections.

It will be interesting to see if Jeb pulls the “common man” card just like his brother. Doing so just might end up working to his advantage in the end.

Jeb Bush is coming in hard and fast. Polls are rising, Republicans’ mouths are watering, and Obama is checking the real estate market in Hawaii. In due time, we will have our third Bush in presidential history.

I’m not sure if this article is serious or not, but there’s no way Jeb chooses Marco Rubio to be his running mate. This is from Larry Sabato’s Crystal Ball: “Such a matchup obviously makes little political sense, and Florida’s electors — assuming the GOP ticket wins in the state — would have to abstain in the vice presidential voting unless either Bush or Rubio has moved his voting residence outside of Florida. If the presidential contest is close in the Electoral College tally, these abstentions would open up the possibility that no one would obtain an Electoral College majority… Read more »

There’s no way that Jeb could choose Rubio as his running mate because it is not allowed according to the constitution. Presidential and vice presidential candidates have to be from different states. But never mind; you don’t need to educate yourself before publishing articles.