The Daily Nexus
Tennis
Gauchos Take Down LMU, Santa Clara
February 23, 2015 at 5:20 am by Evander Hilton 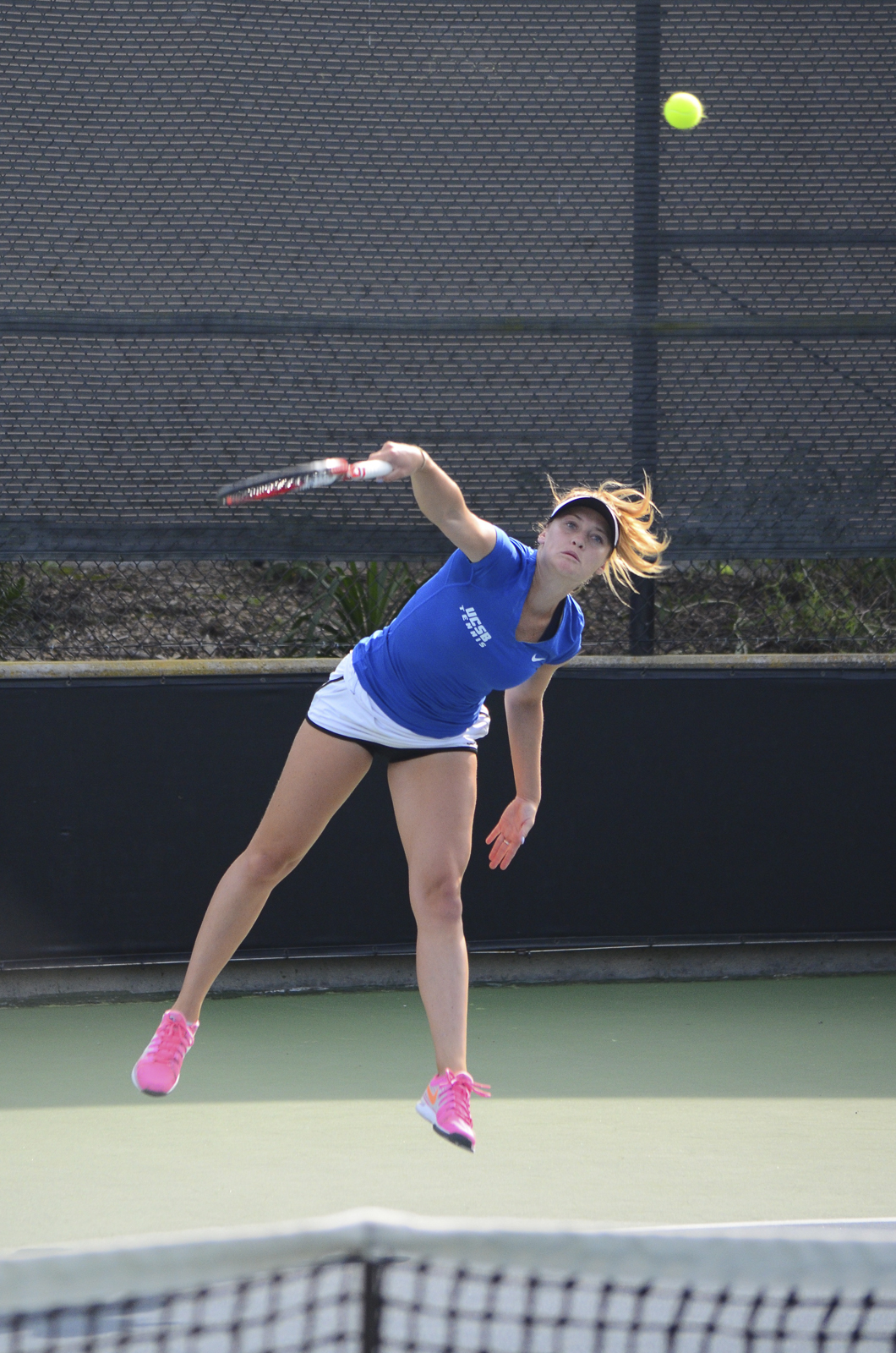 The UCSB women’s tennis team fell to the University of Oregon at a score of 5-2 this Friday afternoon.  The win lowered Santa Barbara to an overall record of 3-4, with the Ducks leapfrogging the Gauchos to raise their overall record to 4-3.

“There [were] a lot of positives today. [Sophomore Louisa Candido]’s attitude was really good, and she really just outcompeted the other girl,” assistant coach Erica Cano said. “[Senior Stacy Yam] did really well, she overcame some adversities and fought back to win 7-5, so those are some good positives.”

On the No. 2 doubles court, sophomore Jamiee Gilbertson and junior Priscila Garcia lost to the Ducks’ senior Nicole Long and sophomore Marlou Kuliving at a score of 8-2.  Sophomore Melissa Baker and Candido dismantled Oregon’s Kadie Hueffner and sophomore Lina Akesson 8-2 to keep the Gauchos in the running for the doubles point.

With the Gauchos and Ducks both claiming one win each, all eyes turned to the No. 1 court, which was to be the deciding match for the doubles point.  Freshmen Natalie Da Silveira and senior April Scatliffe held strong throughout the match, eventually falling to Ducks duo freshman Nia Rose and freshman Alyssa Tobita at a score of 8-4, claiming the doubles point for Oregon.

“I think we need to turn it around in doubles.  The little mistakes in doubles are costing us,” freshmen Sharona Levinson said. “I think if we could have gotten the doubles point in these last few matches the results would’ve been different.”

With two big matches to follow this weekend against Loyola Marymount and Santa Clara University, UCSB will have to tighten up on the doubles courts in order to get back to its winning ways.

On the singles courts, Candido got the Gauchos off to a fast start, taking down Allie Hueffner 6-2, 6-1 on the No. 6 courts.

Stacy Yam held down the No. 5 court, taking down the Ducks Lina Akesson 6-4, 7-5.  The bottom two courts were the only wins for the Gauchos on the afternoon, with the rest of the singles players falling to the Ducks.

“All the other courts were close and we have two more matches this week so the best we can do is come out firing tomorrow,” Cano said.  “Lets treat this as a warmup match and go into the next two and really push the gas pedal.”

The UCSB women’s tennis team took down Loyola Marymount University 6-1 on Saturday, securing an important victory for the Gauchos.

The Gauchos made vast improvements from their match the previous day against the Ducks, tightening up their play on the doubles courts to secure the point for UCSB.  On the No. 1 court, the Gaucho duo made up of freshmen Natalie Da Silveira and senior April Scatliffe teamed up to take down the Lions’ Jessica Perez and Ellie Grossman at a score of 8-1.

At a crucial point during the match, the Lions smashed the ball onto the Gauchos’ side of the court which put Scatliffe in a difficult position to return, yet she found a way with a lob shot.  The Lions responded with a vicious return, leaving Da Silveira no other option but to lob it once again, causing LMU to hit the ball long and give the Gauchos the point.

“It was a solid match overall. We were competitive in all positions,” Thibodeau said.. “If we want to win our conference, that’s what we have to show in each match.”

Gaucho pair Jaime Gilbertson and senior Stacy Yam dominated their match against Lisa Piller and Anna Romeka, winning it at a score of 8-2.

“Today everyone showed up at every single position,” sophomore Jaimee Gilbertson said.  “After our tough loss yesterday, we all came out fighting and simply outplayed our opponents.”

Sophomore Louisa Ortiz Candido, and Sophomore Melissa Baker beat the Lions Andrea Crespo and Julia Norlin on the No. 3 court, in what was a very close match ending at 8-5.

On the No. 1 singles court, Jaime Gilbertson got off to a rough start in her first set falling 1-3 fast.  She came back to win five unanswered games, taking the first set 6-3.  Jaimee took her second set in a tiebreaker with the Lions No.1 Madison Wesseln ending 5-7, winning her the match.

Melisa Baker won her first set against Kristine Kouyoumjian 6-4 on the No. 4 court, after losing her first three games, then winning the match taking the second set 6-2.  Stacy Yam lost her match against in three sets to the Lions Romeka, after winning the first set 4-6 she went on the lose the next two sets 6-7, 6-10.

Luisa Candido won her second match of the weekend for the Gauchos at the No. 6 spot, handily defeating Julia Norlin 6-0, 6-0.

“Our main goal is to become ranked, so today is a step in the right direction,” Gilbertson said.  “It definitely helps our confidence, especially going into a tough match tomorrow against Santa Clara.”

The Gauchos took down the Broncos 4-1 in a match that was constantly threatened with cancellation by periodic spouts of rain Sunday afternoon.  After losing to Oregon on Friday, UCSB responded as well as any team can, winning the next two matches on Saturday and Sunday.

“It seemed to inspire them to play even better,” assistant coach Erica Cano said. “They played like the team they want to be.”

The match was originally supposed to be played at 11:00 a.m. but was moved up to 10:00 a.m. in the hopes of missing the forecasted rain.  In order to ensure the match had a victor, the Gauchos skipped the doubles matches that are traditionally played at the start, only playing singles matches.

The Gauchos got off to a great start on the No.2 court with freshman Natalie Da Silveira taking down the Broncos’ Chelby Cooke quickly 6-0, 6-1.  Sophomore Louisa Candido was next on the No. 6 court, taking her third singles win of the weekend 6-1, 6-2 against Riley Morgan.

“My matches this weekend has been pretty solid,” Candido said.  “I didn’t start off the season in the singles line up, so this was my time to step up and show that I can contribute to the team.”

Stacy Yam defeated Danielle Zinn on the No. 5 court 6-1, 6-3, collecting the Gauchos third unanswered win on Sunday.  Eventually the rain forced officials to call a temporary halt to the match, with the players, coaches, and some parents beginning the process of cleaning and drying the courts after the rain subsided.

Once the courts were clean, sophomore Jaimee Gilbertson, senior April Scatliffe and sophomore Melissa Baker were allowed to resume their matches.  Jaimee came back after the break to win her match 6-3, 1-6, 6-3 on the No. 1 court against Nabila Farah, effectively claiming the victory for UCSB.

Scatliffe was unable to get the win on the No. 3 court, falling in a tiebreaker to the Broncos’ Daniella Silva 6-4, 7-6, (3).  Melissa Baker was unable to finish her match with it being called off indefinitely after more rain began to hit the courts, with the Gauchos’ win already secured.

“I feel like we did this really well, we were able to capitalize early on and get the four wins we needed before it started raining,” Candido said.  “Even though we had two intense matches on Friday and Saturday, our hard work has really been paying off because the energy was still there.”

After a busy weekend UCSB will have a small break in their season, not playing again until March 5th, when they face off against head coach Simon Thibodeau’s old team.

UCSB next play on March 5th against Fresno State, at 5 pm in Fresno, California.