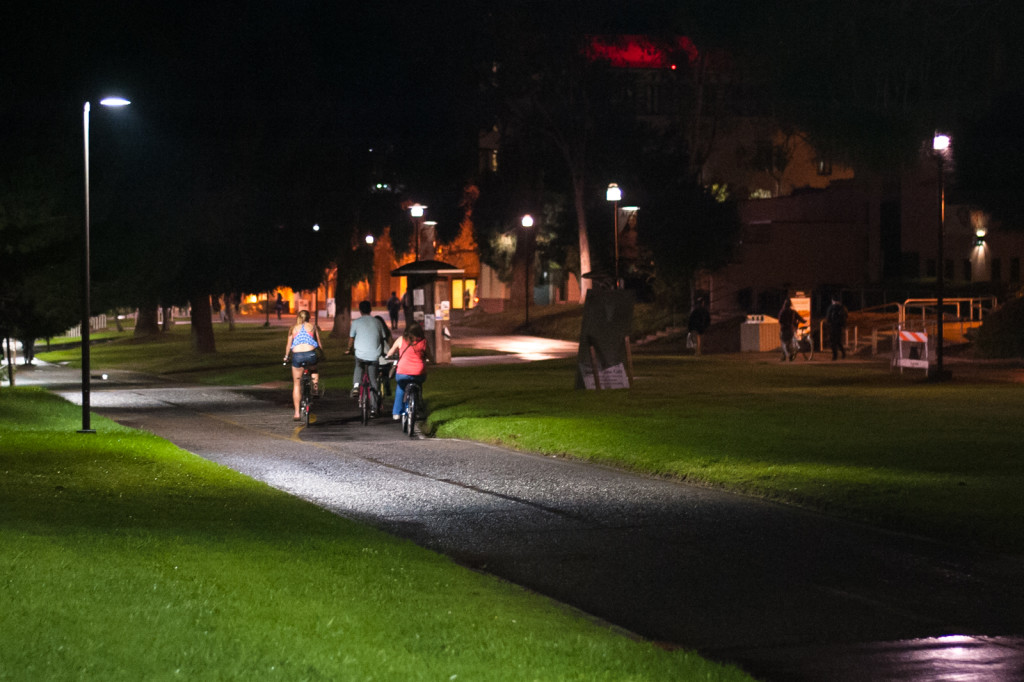 The UCSB Police Department (UCPD) hosted its annual Lighting and Safety Walk Thursday evening to inspect light posts and light bulbs on campus in an effort to make the university safer and more light-efficient.

UCPD officers, university staff, administrators, professors, students and Campus Security Officers (CSO) participated in the event with the goal of making the university a more secure environment at night. The event split participants into three groups and covered three different walking routes: behind Davidson Library; from Girvetz Hall to the Student Resource Building (SRB); near the bus loop and the RecCen. Each group was led by a UCPD officer, two university staff members and two CSOs.

“It is very important for people to feel safe within the community,” Fisher said. “We have been working on new lighting projects for the past twelve years, since I have personally been here.”

According to Fisher, old round light bulbs, also called “Johnny Balls,” will be replaced in every walkway with newer and stronger white lighting.

“We have replaced fixtures such as Johnny Balls,” Fisher said. “Our goal is to have most of those replaced throughout the walkways. We want a whiter light everywhere and we see lighting deficiency right now, but it will be improved.”

Fisher said the university is installing new lighting because the currently-placed bulbs are an outdated brand that contribute to light pollution.

“The old Johnny Balls were created in the 1960s, but we are replacing the old style fixtures,” Fisher said. “These globe lights produce sky globes, and one of the goals of the campus is to change this because in an environmental perspective, it spills light into the sky for color rendition and we want light on the ground as opposed to the sky.”

“I think proper lighting on campus is a deterrence for crime,” Blime said. “If a person is looking to commit a crime, it is less likely that they will do it in an area that is very well lit. At the same time, it gives students more of a sense of safety and security while walking on the campus.”

According to Blime, serious crimes on campus have been less frequent over the past year due to student participation in safety-related events.

“We want to promote safety, for everyone here,” Blime said. “We have had a reduction of serious crime in the past year. We have had a 10-20 percent decrease in crimes and it has become more popular for students to participate in these walks and create more safety because we address concerns.”

Campus Senior Electrical Utility Lead Jim Morrison said a person’s facial expression is more visible under whiter light, which would expose the intentions of a potential perpetrator before a crime is committed.

“We want more white light,” Morrison said. “During the summer months, they stay on for nine hours and 13 hours in the winter time. If you have a whiter light, you can see facial expressions more. Before a crime, you can see if people look ticked-off and this light makes it possible to see.”

Biology graduate student graduate Emily Ellis said it is discomforting to walk to her car at night in the dark after late classes.

“The animals that I study are nocturnal,” Ellis said. “I am happy to stay for experiments, but it is unnerving when it is pitch black and I am the only person on campus. I definitely walk faster and only go towards areas where it is well-lit.”

Ellis said she worries about her students’ safety when they leave her class at 10 p.m. because the Life Sciences Building currently does not have sufficient lighting due to construction at Davidson Library.

“It is good to see what is around you and to feel safe as if you are in your own home,” Ellis said. “I worry for them because you never know what can happen.”

According to Ellis, administrators and police officers have demonstrated throughout the years that they are invested in ensuring student safety.

“This type of event is really assuring that people care about the student concerns. It seems like the administrators and UCPD officers really care about the opinions of students. The survey that was sent out via email recently is an example of this as well.”

CSO officer and fourth-year Chican@ studies major Melissa Cruz said theft is the most common crime on campus. According to her, theft occurs frequently because darkness facilitates stealing.

“I have been a CSO for three years and the lights have always been important,” Cruz said, “It brightens up the campus and deters people from stealing things. Stealing is the biggest issue here at UCSB, especially stealing bikes.”

Cruz said CSO flashlights can only do so much to prevent theft at night and that the new installation of lights will help significantly more in preventing crime.

“If somebody looks suspicious, we only flash our lights at them,” Cruz said. “But if there are lights then it can prevent them from stealing bikes.”