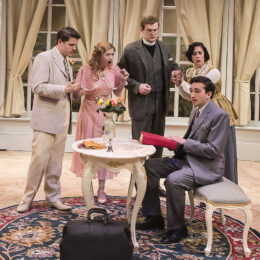 The cast of “The Importance of Being Earnest” waits in suspense for Jack to open the red book and learn what his real name is. From left to right: Adrian Carter (Algernon), Alison Wilson (Cecily), Ian Elliot (Canon Chausuble), Avila Reese (Miss Prism) and Zach Macias (Jack). Photo courtesy of David Bazemore.

“When I am in trouble, eating is the only thing that consoles me,” senior BFA Theater student Adrian Carter said during Friday’s opening night performance of Oscar Wilde’s The Importance of Being Earnest. Perhaps this show was a slightly stressful experience for Carter, since he found himself with a mouth so full of muffin that Carter — playing as ladies’ man Algernon — had to pause for five and three-quarter seconds to chew his way to coherency. Yet it was with great pomp and bravado that he courageously attempted a few words of unintelligible wit. Later, he repeated the line, his cheeks still chipmunk-full of muffin.

Not all the actors had food to console their nervous excitement: first-year Theater major Michael Lin portrayed the butler, condemned to serve food rather than eat it himself. Despite this atrocious lack of nourishment, from his first step onstage Lin carried his character’s endless jesting with the posh properness of a superbly English butler. Perhaps muffins are not the only answer to greatness.

Though he had little onstage time in comparison to the four lovers central to the plot, Lin dedicated much thought and energy into preparing for his role. “[To get into character] I try to go back to the script or the director for guidance,” Lin said. “No matter how many times I read through this play, I [am] still fascinated by how well-crafted each and every dialogue is.”

Lin managed to craft his own fascinating persona even without dialogue to accompany him. The first minute of the play involves the butler listening in polite agony to the discordant sounds of Algernon attempting music in another room. With nothing but a tea set (perfectly arranged by the tech crew) to distract himself with, Lin was somehow never without purpose in his actions and set the tone of the play right from his entrance.

Second-year BFA Theater major Zach Macias’s performance is evidence that a mouth full of food is not the only way to reduce stress. In fact, it can have the opposite effect. “[One of my favorite moments was] watching Adrian [Carter] have to eat cucumber sandwich after cucumber sandwich … and being so thankful I don’t have to do that,” Macias said.

It’s a pity that a solution as simple as food doesn’t work for every actor, since Macias’s character suffers through the most prolonged episodes of stress in the course of the play. From blundering through a proposal to the disgrace of having been bred in a handbag, his predicaments could induce any viewer to offer him whatever sandwich he likes, if he would only look a little less frazzled.

Though often inarticulate during the course of the performance, in an interview with the Daily Nexus Macias perfectly articulated the attraction of the play: “It is so beautifully written. Nearly every line is woven with hilarity … the challenge is to find where the real punchline is.”

The cast of “The Importance of Being Earnest” worked nearly every part of the script into a punchline, and had their audience in stitches beginning to end. As director Simon Williams proclaimed in his opening speech, this production is the debut of Wilde’s play at UCSB. As the second-most quoted play after Hamlet, according to Williams, it is high time indeed that Wilde’s hilarious masterpiece was shared with the Gaucho community.