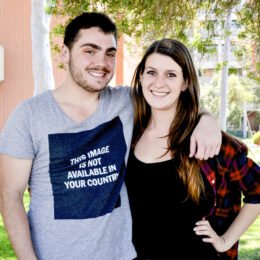 Out in the open ocean past the Santa Barbara harbor, the mussel man drives a self-designed boat at 4:30 a.m. to the harvest ropes. Using a fisherman technique rarely found in the U.S., he pulls up more than a thousand pounds of mussels a day, easy.

The supplier of 52 stores down the coast, Bernard Friedman is “the dude,” as documentary filmmaker and senior Elvis Metcalf calls him. He’s the one who provides all the local mussels in Santa Barbara, and he does so in an environmentally enriching way.

In addition to being The Dude, Friedman is the subject of the Blue Horizons’ produced documentary “Mussel Man.” An intense 9-week documentary program offered at UCSB, Blue Horizons reels a dozen or so students into the world of environmental issues, filmmaking and intensity that is the 17-hour workday.

Last summer, Metcalf teamed up with senior Matt Mersel and junior Megan Schmidt in the program. Metcalf is the professional face of the group. Responsible for publicity and festival submissions, “she does the talking to people thing,” as Mersel puts it. She’s also the one who got Mersel to apply for the program, and she’s the one who was interested in documentary filmmaking from the get-go.

“I had an odd inclination into some documentary things, but Blue Horizons solidified that direction,” Metcalf said, her light brown hair tucked behind the ears. “It’s nice to have a channel within the film world.”

Within the program, the trio worked alongside nine other students in a classroom setting. Three courses were required: one lasting the whole nine weeks, the others lasting six and three. Taught by documentary experts Richard Hutton, Michael Hanrahan and LeeAnne French, the classes were a crash-course in all things environmental science and filmmaking. Guest speakers delivered lectures, and this is how Friedman rolled into the picture.

“[You knew he was] a cool dude. He was wearing a company t-shirt and his bathing suit, and he was like, look at my Tony Stark drawings of my mussels on the rope,” Mersel said. Just like Ironman, Friedman brought blueprints of his special harvesting techniques to show the class.

Friedman is the only fisherman in California who uses a mussel fishing technique so sustainable it actually cleans the water. But because very little fishermen have seen this technique in the nation, obtaining permits is difficult, and the difficulty has the potential of wrecking the Mussel Man’s entire livelihood.

“Organizations are hesitant and want him to do all these studies. So he’s wasting all this money,” Mersel said. The film places Friedman as a character intertwined in a larger issue: the importance of finding sustainable animal protein sources.

As the film details through its numerous interviews, by 2050 there’s expected to be a massive shortage of animal protein. “We kill animals and put them on trucks — it’s polluting our world,” Metcalf said.

Within this larger framework, Friedman’s sustainable technique serves as a road map to environmentally-friendly food consumption. And just like that, the trio nailed the conflict and resolution for their narrative story.

Except it wasn’t that simple. Because of Friedman’s modesty — the man is a literal genius, the only one in California to produce mussels in a clean way, and he’s humble as can be — and because of his reluctance to trash talk permit organizations, the filmmakers had to dive deep to unravel the conflict.

“We kind of imposed ourselves on his family,” Metcalf said. “Which they were okay with. We definitely spent a lot of time hanging out with them and talking to them and getting him to be comfortable talking to us with the camera. Normal people are not comfortable when you stick a camera in their face.”

Interviewing turned out to be a lengthy process, and the team shot their last bit of footage three days before the project screened at Pollock Theater. That left less than 72 hours to finish editing.

Seventeen-hour days are notorious in the world of filmmaking, and students in Blue Horizons are no exception to that rule. For the last 10 days before showtime, most hours were spent in the editing room. “We’d get to the editing room at 9 a.m. and we’d leave at 4 a.m.,” Mersel said, to which Metcalf added. “And then we’d come back in at 8 a.m.”

But the work paid off, and culminated in an invaluable experience for Metcalf, Mersel, Schmidt, Friedman and the Santa Barbara fishery community. Mersel’s mom, aunt and grandma came to the screening, along with Metcalf’s dad and a whole crew of supportive fishermen.

Upon hearing that the documentary was to play at SBIFF, the mussel man responded in a characteristically appropriate way for a man of few words: “Great. I’ll have to bring my pen.”

To find out more about Blue Horizons, go to carseywolf.ucsb.edu/emi/blue-horizons. For more info on “Mussel Man,” go to musselmanfilm.com.