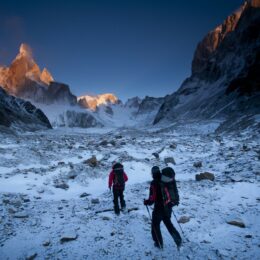 “Follow your dreams” is an often-repeated piece of advice that most have heard, and many agree on, but how does the well-known mantra fare when said dreams top over 10,000 feet off the ground? According to David Lama and Peter Ortner: “follow them … and film it as proof.” In 2012, the two climbers embarked to ascend the Cerro Torre mountain in Patagonia, which measures 10,262 feet. The Cerro Torre was made famous and somewhat controversial in 1959 when Italian climber Cesare Maestri claimed to have reached the peak and was found a liar by almost everyone. Since then, many climbers have traveled to South America to try and recreate this feat along the now famous “Compressor Route,” named for a compressor Maestri left hanging off the face of the mountain, which still hangs there today.With the sponsorship of Red Bull Media, Lama and Ortner turned the experience into a documentary film. The final product was “Cerro Torre: A Snowball’s Chance in Hell,” which this reporter caught a viewing of at the Santa Barbara International Film Festival on Thursday, Jan. 29. The intense climbing scenes were shot either by a film crew in nearby helicopters or POV cameras fastened to the climbers’ helmets for a more in-depth look. Although the movie is most suitable for climbing, nature or adventure enthusiasts, it isn’t without its funny moments. In one scene for example, Ortner woke up in his top bunk to find that Lama had tied him down to the bed so he wouldn’t fall (Lama later admitted to me that he was pretty hungover when this happened).

From the age of five, Lama was fortunate enough to find his calling in life. He was a gifted climber and became a world climbing champion at 16. The now 24-year old says that although the Cerro Torre climb was not the most difficult he’s done, it was the “most meaningful.” He states that this trip in particular taught him a lot about himself and his values. According to Lama, the risks you take and don’t take while climbing a mountain help define who you are in life. He also revealed this trip helped officiate his transition from competitive climbing to the more natural and self-sufficient form of alpine climbing.

In many ways, Lama’s story in respect to climbing the Cerro Torre is one of self-fulfillment. He stresses that making the decision, although dangerous, wasn’t very difficult for him because he firmly knows that climbing is his passion in life, so he was willing to take the risk most other people wouldn’t, those who are content to “go to a climbing gym.” For Lama, the troubles and hardships come with the territory because he knows the feeling at the end will be worth it, which is a feeling most people may not ever know.

For more information, go to cerrotorre-movie.com/.

Asking questions are really fastidious thing if you are not understanding something completely, however this article gives good understanding yet.