Everybody likes a good nap. Whether after an 8 a.m. you didn’t get enough sleep for, or during a weirdly-spaced gap between classes, a quick nap can help reset your day and get you going again. But what if your bed isn’t an option and you still want to rest? Look no further my fellow sleepyheads, for I have compiled here a (very much incomplete) review of some of the premiere couches at UCSB for a little Gaucho siesta. In this highly scientific experiment, each of the five tested couches were subject to a 1-10 ranking in five different categories. These categories include the availability of the couch, how cushy it was (not too hard, not too soft), the quietness of the couch’s environment, the size of the couch and if the couch was secluded enough to where you wouldn’t feel as though you were being watched whilst sleeping. Without further ado, here is the definitive power-ranking of five couches I’ve slept on.

1.) The Couch in the Daily Nexus Editorial Office

Disregarding the fact that I’m clearly biased towards the staple of our office, this is still a top-quality couch that deserves to be on this list on its own merit. A little on the too-squishy side, and you kind of slide into the back of it, but, all in all, I had an enjoyable time. The armrests are cushioned which makes a nice pillow and the office is pretty quiet since people are usually working. 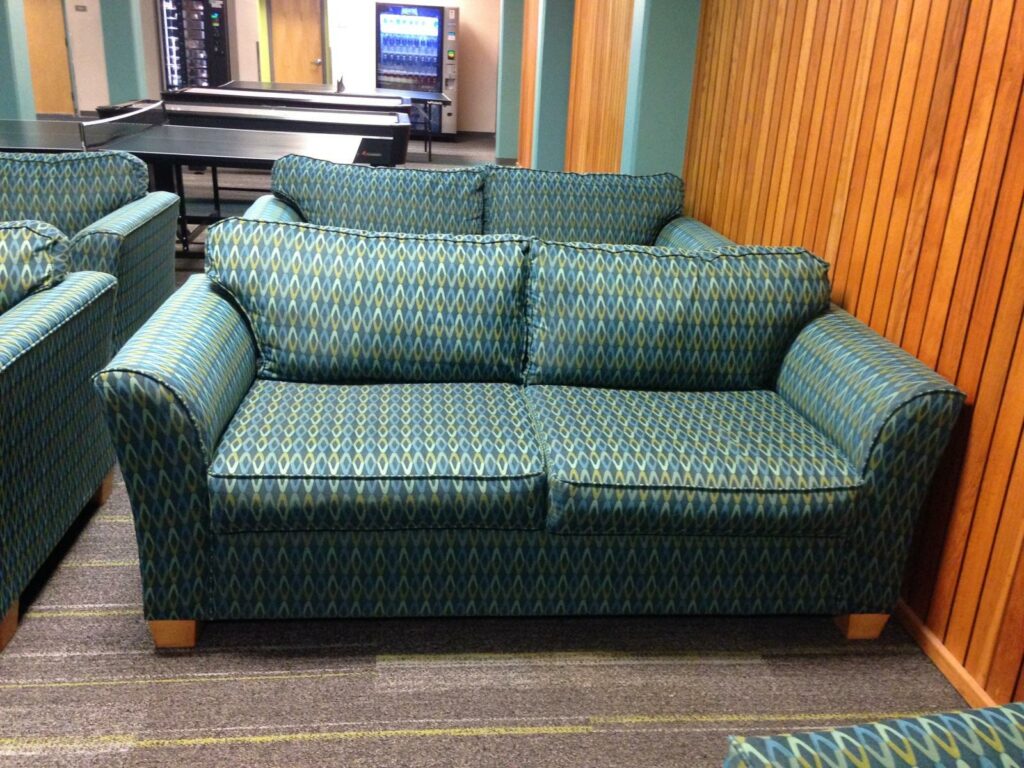 The armrests are high and a little awkward for resting a head on. The couch is the perfect size, big enough to accommodate nappers of nearly every size. I found the couch to have a near-ideal squishiness, perhaps verging on being a tad too firm. Granted, most people aren’t going to seek out a couch a mile off campus for a nap, but, hey, if you’re sexiled or even just waiting for laundry, this could be the couch for you.

3.) Fourth Floor of the Library 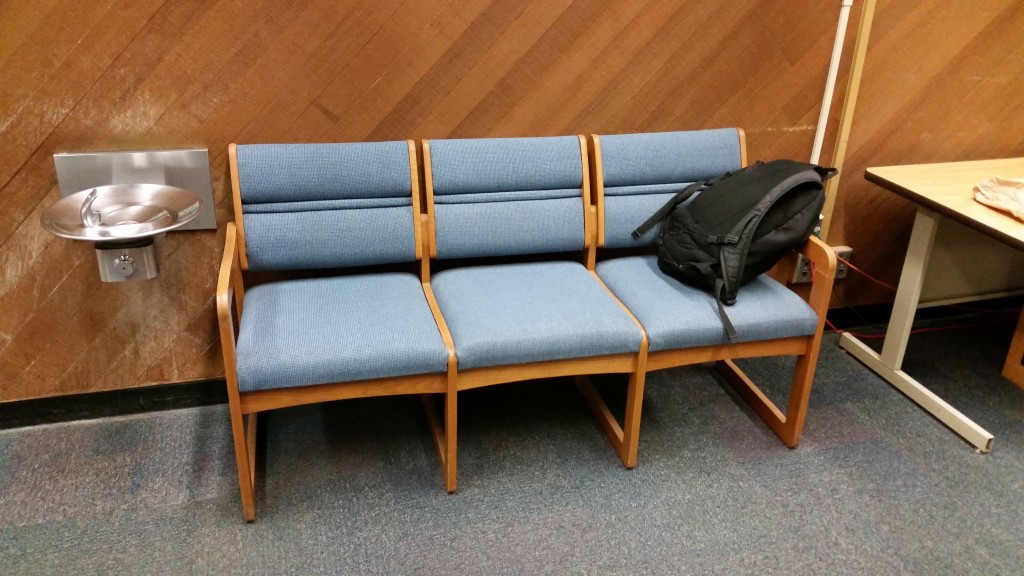 The wooden armrests meant that I had to use my backpack as a pillow, which worked out, but it does mean that you have to come prepared. The couch is in an open part of the library with plenty of foot traffic and there’s a water fountain next to it. While everyone is generally too engrossed in their studies, the location does mean you are subject to some passing glances.

4.) Big Couches in the UCen 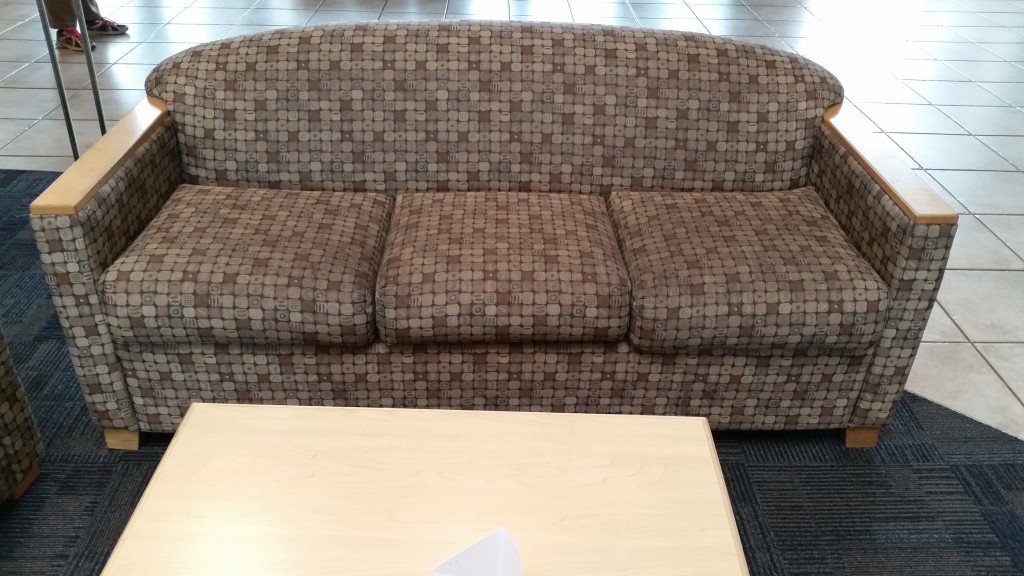 Self-conscious nappers beware, this couch is not for the faint of heart, I felt as though I was being watched the whole time. The couch itself is ok, but the environment is sub-par for all but the lightest of catnaps. Depending on the time of day, it can be a bit hard to find a spot, and also the UCen can get pretty loud. Another negative was that my knees had to be bent, but to be fair, I’m a bit taller than most.

5.) Bottom Floor Couches of the SRB 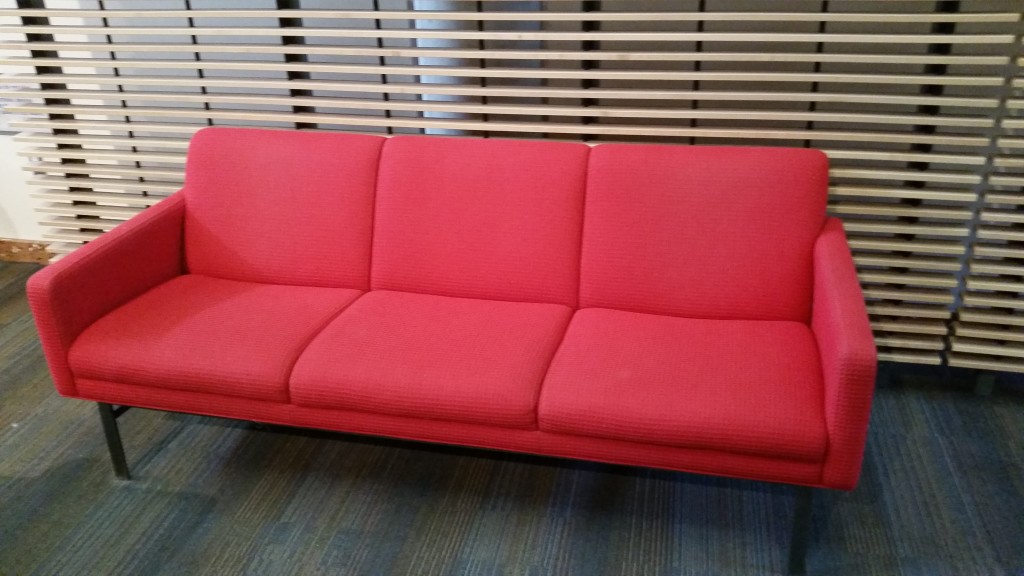 The design of their couches is eye-catching, and more modern than the couches on other parts of campus, but this does not lend itself well to comfort. I questioned where my head was supposed to go, based on the lack of armrests that some of the couches suffer from. Looking back, this might be a strategic, anti-nap design piece on their part. I felt not only watched, but judged by people who were actually being productive. The whole vibe of the SRB is sort of anti-nap, seeing as it is a building full of resources for the collegiate go-getter, and I was just there to sleep and take up space.

The point is, if you are ever in need of a napping location, there are plenty both on and on campus that will serve their dutiful purpose. Don’t be afraid to get some Z’s so that you can get some A’s too (on your tests that is).

The Nexus couch is pretty damn comfy, I must admit.