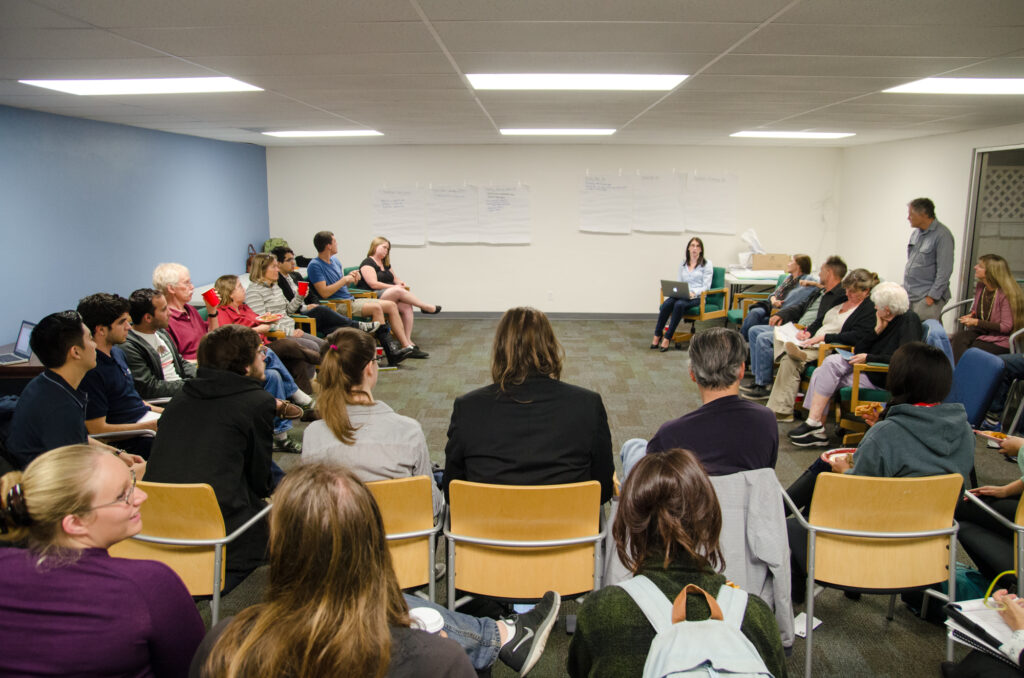 Tuesday night’s weekly Isla Vista stakeholder’s meeting, organized by Assemblyman Das Williams’ office, discusses the possibility of creating a Municipal Advisory Council either in addition to or instead of a Community Services District. Alex Nagase/Daily Nexus

This week, attendees discussed whether to create a Municipal Advisory Council (MAC) instead of or in addition to a Community Services District (CSD). Discussions at previous self-governance meetings had been primarily focused on forming a CSD, but it is still unclear exactly what form of self-governance will be proposed by Williams’ Assembly Bill 3, which aims to create self-government in I.V. in order to provide infrastructure and services to I.V. residents. The group also discussed efforts to understand the demographics and needs of the I.V. community.

“We’re talking about the CSD option so in-depth because it’s so complicated and covers so many areas,” Elliott said. “We’re going to talk about Municipal Advisor Councils today, which is an alternative to the CSD. I.V. had one in the 70’s and 80’s that was dissolved, so we’re talking about maybe bringing that back.”

According to Elliott, cityhood discussions cannot begin until organizers have a better idea of I.V.’s potential financial situation.

“The cityhood plan we can’t really talk about until we find out if it’s financially feasible,” Elliott said. “The CSD is so complicated and has so many layers we’ve been focusing our meetings on that.”

Alumnus and local business owner Jay Freeman said it was not made clear at the meeting whether an I.V. CSD would be feasible.

Second-year history of public policy major Ashcon Minoiefar however said stakeholders should not be content to create only a MAC.

“I think that the MAC is a great thing for us to be able to utilize, due to the fact that a CSD would take about 16 months for it to be formed,” Minoiefar said. “However, I wouldn’t want the momentum, the political feasibility that we have right now to be spent only on a MAC. This is our chance to do something very big, like institute a very strong institution that can be here for decades to come because it’s self-sustaining.”

Longtime resident Sue Dixon said she is concerned that there would not be adequate funding and support with a MAC.

“It had been more than 10 years since we had a disaster and support for Isla Vista just died as part of that cycle. We get another disaster and people start pouring resources back and we’ve seen this happen,” Dixon said. “This is why I think we should have permanent funding for a MAC. I think a MAC is a great idea. I would like to see permanent funding because I don’t trust the county to keep going with it.”

Associated Students Executive Vice President of Local Affairs Cameron Schunk said the both MAC and the CSD could be created.

“I don’t view these two things as mutually exclusive and I hope no one in this room does,” Schunk said.

I.V. Recreation and Park District board member Pegeen Soutar said a MAC was established in 1972 because of the unrest in I.V. and founded many of the current institutions in I.V., including IVRPD and IVFP.

Santa Barbara City College (SBCC) Trustee Jonathan Abboud said he is working to put out a survey of I.V. residents on how they would like potential tax dollars be spent in I.V., as well as the possibility of performing a census in I.V.

“People don’t know the exact technicalities, but they understand the taxes pretty well,” Abboud said. “They knew that they needed more money if they wanted these services. Parking and lighting was overwhelmingly what people would put their money towards. We were thinking of doing a census that would be going door to door and asking ‘How many people live in your apartment?’”

Spatial Arts Professor Kim Yasuda said she would be willing to survey university faculty living in the faculty housing units adjacent to I.V.

“Has anyone gone over to faculty housing and canvased them?” Yasuda said. “That’s a tax-paying base. I think we could get permission to get on the list serve or something … That’s 65 units of probably 200 people.”

The stakeholders created a preliminary list of broad, amendable goals for a CSD to add to the AB 3 language so that the bill can continue forward in the legislature. The list includes the creation of a MAC, a tenant mediation program, a parking program and the building of community facilities. The tentative list of goals will be discussed further at next week’s meeting.