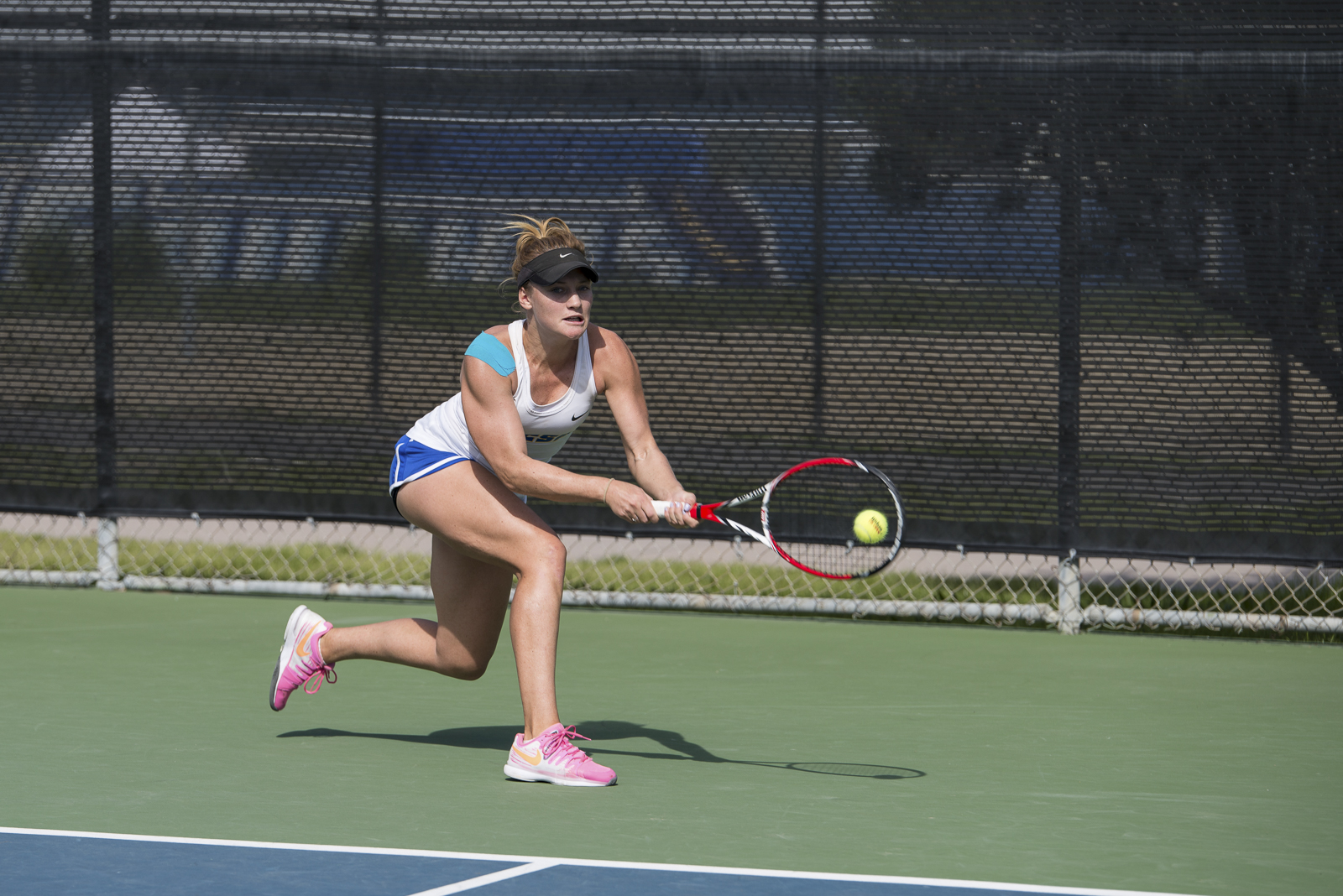 Jaimee Gilbertson rushes to return an angled shot to her backhand side. Eric Swenson/Daily Nexus

The UCSB women’s tennis team lost its first home match of the season Saturday, falling to San Jose State 6-1 on Valentines day.  The Gauchos had won the last two home games against some very tough opponents, beating UNLV as well as Saint Mary’s college before losing to San Jose State.

“We were without the help of our number one player, (freshman) Lou Adler, which is a tough obstacle to overcome because everyone has to play a spot higher than usual,” assistant coach Erica Cano said.  “Everyone competed well despite playing up so that was a positive.”

After being crowned Big West Player of the week last Wednesday, Adler suffered an injury to her foot, making her unable to participate in the match against San Jose State.  Her absence from the number No. 1 spot meant that all the players below her had to move up a spot, increasing the difficulty of the match for the Gauchos overall.

San Jose State got off to a quick start against UCSB, taking the doubles point by force. Junior Priscilla Garcia and senior Stacy Yam lost 6-3 to at the No. 3 doubles court to the Spartan’s senior Julianna Baclear and freshman Malin Cubukcu.

Onto the single’s competition, UCSB was unable to force its way back into the match losing five of six first sets to the Spartans.  On the No. 6 courts, Garcia fell to Abbie Pahz in two sets at a score of 6-0, 6-1.

“Natalie played really well today, and it was fun to see her compete at such a high level” Cano said.

On the No. 3 court, Scatliffe pushed Klocker to a tiebreaker in the first set, eventually losing the match at a score of 7-5, 6-2.  Natalie Da Silveira secured the lone Gauchos win Saturday afternoon, owning the No. 2 court at a score of 6-4, 6-3, overtaking the Spartans Gaelle Rey.

Jaimee Gilbertson lost at the No. 1 singles spot to the Spartan’s Sybille Gauvain at a score of 7-5, 6-3 after being up in the first set 5-2 early on in the match.

“We all learned that we all have to be both mentally and physically there,” Freshmen Natalie Da Silveira said. “We need to stay pumped and we need to keep on encouraging each other whether we are down or up in our singles match.”

Team spirit is strong in the Gaucho camp at the moment, and if UCSB is to find their form again before a three match home stretch next weekend, the Gauchos have taken Silveria’s advice to heart.

UCSB play next Friday against Oregon state at 1 p.m. at the Rob Gym Tennis courts.