The Daily Nexus
Tennis
Gauchos Continue Home Dominance Against LMU
February 16, 2015 at 5:00 am by Daniel Moebus-Bowles 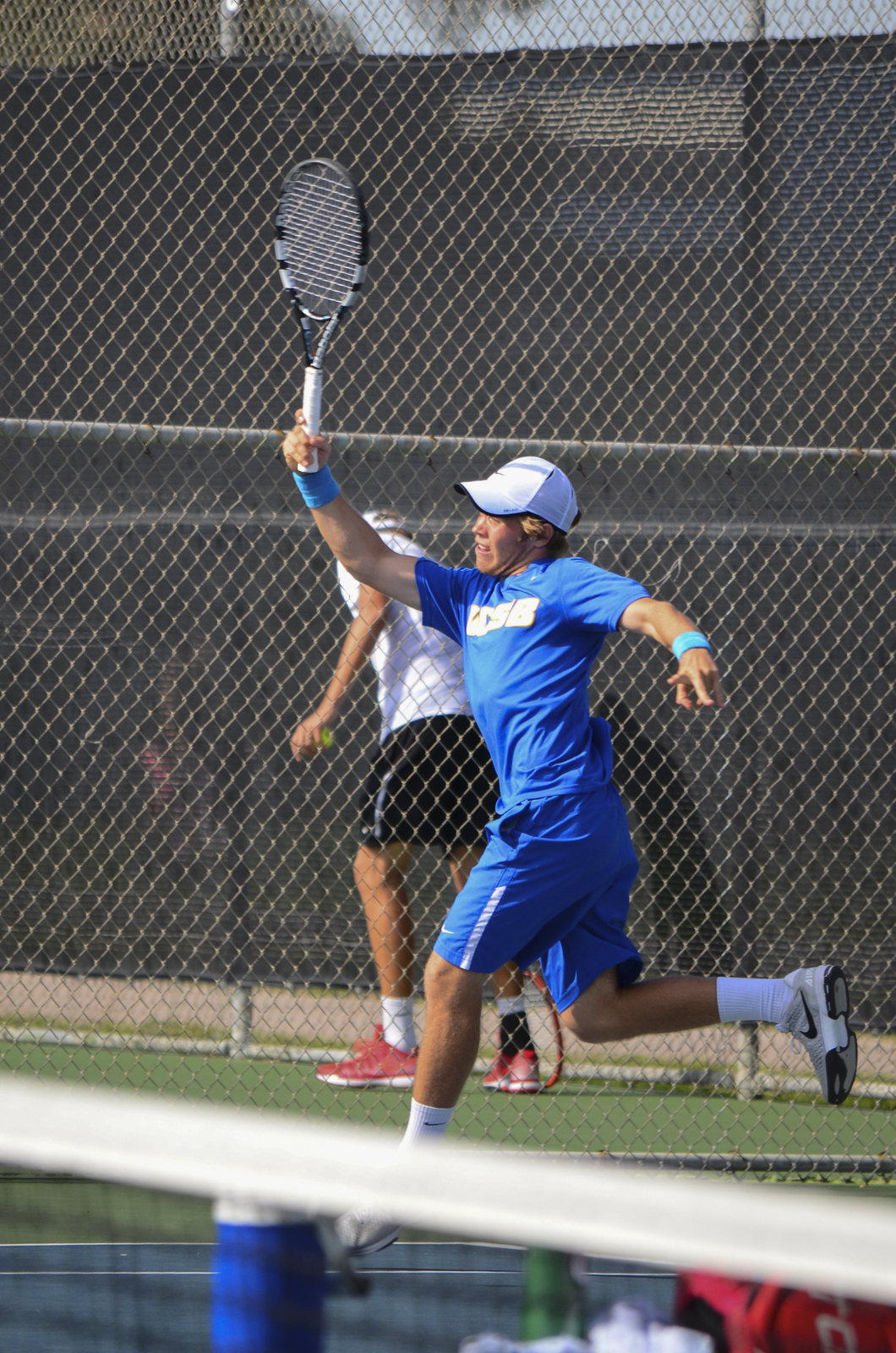 Tobias Galskov hits the ball across the net to his opponent. Christina DeMarzo/Daily Nexus

The UCSB men’s tennis team continued its dominance at home this past Saturday, defeating Loyola Marymount University 4-3, with singles play as its driving force.

With this victory, the Gauchos improve to an overall record of 3-4 and the Lions fall to 2-3.

The Gauchos once again struggled in doubles play, only winning one of the three matches and thereby forfeiting the doubles point. Their individual talents made up for this loss as they took four out of the six singles matchups.

Santa Barbara came home from a tough road trip to play in front of another booming crowd filled with Gaucho Locos. The team did not disappoint them, winning the match to keep its undefeated home record intact with the fans cheering at full volume.

“We’ve gotten a massive support system here the last few weeks and it’s just been amazing,” junior player Nathan Eshmade explained. “Along with the fans, the passion of us, being able to play where we practice gives us great success. We just love being here.”

Eshmade demonstrated exactly what playing at home can do for him when he faced junior player Cristobel Rivera on the number four court for his singles matchup. The young Gaucho took out his Lion opponent in a straight set, one-sided event. Eshmade started with a 6-4 victory in the first set and strolled to a 6-1 victory to notch another point towards his team’s win.

Another Gaucho who pushed his team to a victory is junior player Andrew Riminton, who had the quickest finish of the match. He was nearly perfect on the day, sweeping his opponent 6-0 in his first set and then nearly repeating that performance, taking the second 6-1. His performance tied the match at 1-1 to start off the team’s singles triumph.

The most exciting match of the day came from none other than the number one ranked court for the match. Senior Tobias Galskov of UCSB faced the intimidating freshman Eroll Smith from LMU. Standing at 6-6, Smith delivered powerful attacks and displayed great accuracy in a heated first set, hitting every mark he wanted.

Galskov countered his attempts and battled back to win the first set by a close score of 7-6. The veteran fell behind the rookie in the second set as well, but quickly changed the tone and sprinted to a 6-2 victory. The senior’s singles success sealed the Gaucho’s victory.

“We’ve had a couple of tough losses on the road so far, but you have to keep working and grinding it out,” Eshmade said. “Keep going, stay mentally and physically strong, and that is when you find your success.”

The Gauchos have displayed this success at home and will look for their first road win of the year this weekend when they take on the University of San Francisco and UC Berkley in two straight days. Both matches are set to start at 1 p.m. in Northern California on Saturday and Sunday.