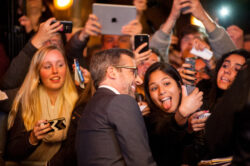 The 2015 Santa Barbara Film Festival came to a close this past Sunday. With it goes the star sightings, the hip boxed water for pass holders and the influx of visitors to downtown Santa Barbara. But what exactly goes into putting this 12-day shindig together? Does some magical movie elf set it all up? Do they sprinkle some elf magic and “POOF!” celebs appear?? Well, not exactly. This event takes months of planning and really couldn’t be executed without the help of hundreds of volunteers and a couple of smart, quick-thinking and creative interns. Like myself, of course.

Interning with the festival was a unique experience. Meeting new people, learning how to answer phone calls professionally, running errands and playing Cards Against Humanity were just some of the duties on the job. My first day as a Volunteer Coordination intern was overwhelming but exciting. My thoughts ranged from “I can’t do this, I’m going to ruin everything!” to “OMG I wonder if I’ll meet Jen Aniston?!” Unfortunately, that didn’t actually happen, but I did learn the basics of what I would be doing for the next eight days. I also learned that business casual for one organization definitely doesn’t mean the same for them all. I showed up dressed as professionally (and therefore uncomfortably) as I could only to discover these fancy slacks were too much. All around me, hardworking SBIFF staff wore jeans, cardigans and T-shirts. I would soon figure out that working hard doesn’t always require a suit and tie.

As the week progressed, I got into a rhythm. 10–11 a.m.: Put dozens of checks next to volunteer names when they have showed up for a shift. 11 a.m.–12:30 p.m.: Run to the Lobero or the Arlington to pick up more sign-in sheets. 12:30 p.m.: Lunch time with my fellow interns. This usually consisted of going to my car and discovering I’d parked in the wrong spot. Two parking tickets later, I would definitely pay closer attention in the days to come

The rest of my shifts consisted of being in the office and observing my boss, Joe, handle shift cancellations or assisting other volunteers who had questions. Yep, this job wasn’t too intense and not very glamorous so far, but it was a good time. During down time, I learned that Cards Against Humanity is totally ok to play at work, just as long as you’re not reading mildly inappropriate cards too loudly.

Then just when it seemed like I wouldn’t get to participate in any red carpet events, my help was requested for the Michael Keaton Tribute event, and the following week for the Steve Carell event! As it turns out, tribute events are not so glamorous for staff, interns or volunteers, although they did require a little more than business casual for everyone. Precise coordination and planning was necessary. From what I observed as I helped check-in the press, stress levels peaked on the red carpet nights, but SBIFF staff managed to stay positive. I scored free Starbucks from a festival employee who had no problem with the fact that my broke intern self had zero cash.

Once the stars were escorted inside the fabulous Arlington Theatre, interns were allowed to take a seat as well. As it turns out, I sat three seats away from Michael Keaton that first night, but failed to notice the award winner at the time because I was too busy staring longingly at his son, Sean Douglas.

From the switch between office antics and serious business time, interning with the festival is an experience that I won’t soon forget. From a paper airplane contest with my fellow interns to attending fancy events, I think it’s safe to say that there is no intern experience quite like this one. You learn not to take yourself too seriously, to work hard when it’s crunch time and to take a step back and take it all in at the end of the night. While there was no magical movie elf working behind-the-scenes, there was definitely some kind of magic at the Santa Barbara International Film Festival this year.