The Daily Nexus
Opinion
In Defense of the Impractical Major
February 11, 2015 at 12:12 pm by Sophia Crisafulli 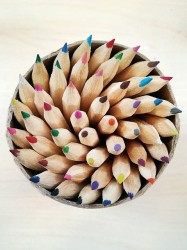 I can’t help but feel that I’ve been duped. For as far back as I can remember, I’ve been encouraged to pursue my passions and follow my dreams. I’ve been told that if I work hard and believe in myself, I can achieve absolutely anything. I’ve been assured that the road to happiness involves doing what you love, what makes you happy, what fills your heart and soul with heavenly song. And I believed it all — I drank the Kool-Aid and never gave it a second thought. So I was nothing short of flabbergasted when, upon announcing that I was entering college as a Literature major, most people looked at me with a combination of concern, panic and genuine confusion, and asked, “but what exactly are you going to do?”

Well, I thought I was doing exactly what I’ve been told to do for the past 19 years. I thought I was pursuing a passion, and devoting myself to one of the few aspects of life that really does fill my heart and soul with song. But apparently I got confused along the way — what I’m really supposed to do is pick something practical, like economics or nursing, maybe. Everyone knows that all an English degree guarantees you is a cardboard box for a house, and, if you’re lucky, the ability to use a semicolon properly.

It seems my predicament is anything but an anomaly; rather, it’s almost become the norm. We live in a world where the job market is increasingly slim, and the prospect of acquiring employment immediately after graduating has been transformed into a storybook fantasy. There are just too many smart, eager young people bursting out into the world, college degrees held proudly in hand and too few jobs to go around. Kids who have grown up with the words “you can do anything if you just believe!” etched into the folds of their brain are suddenly being told that there’s no time for theatre or film or paper maché, there’s only time for practicality. Hence the reason most people react to my major as if it’s contagious. There is barely enough work for people with real professional skills, let alone those of us who hope to subsist off poetry, and perhaps a novella or two.

So should I abandon all hope and switch tracks before it’s too late? Well, this proves problematic in many ways. For one, I really love writing. I know passion doesn’t pay the bills, but I also know that I would rather study a craft I care about than do something that guarantees me security. Secondly, I’m young. I have time to explore and experiment and find my place in the world. I’d venture to say that writing is a pretty important skill, and that even if I’m not the world’s most famous novelist by age 25 (a totally realistic goal), I’ll find some outlet in which to channel my skills.

Lastly, I know I’m not good at that many things in life (I can’t whistle or snap my fingers. Is that weird?), but I believe that I am a good writer. Even if I wanted to, I’m not sure I could hack it as a computer science major. Yes, this might lead to a more stable career path, but considering the fact that I barely know how to make a PowerPoint presentation, I’m not sure it’s a viable option. I have immense oceans of respect for people who study physics and biology and computers, because these are subjects in which I have an almost embarrassing dearth of knowledge. That being said, I would hope that the people who do study these subjects have respect for what I do. It’s amazing to me that despite the same basic hardware, people can be so good and so bad at so many different things, and I think we should all be looking around in constant wonder at the people who do things we could never imagine doing ourselves, whether it be designing computer software or writing a novel.

Maybe I am truly being foolish and impractical. Maybe in a few years, I’ll read this article and want nothing more than to reach back through the space-time continuum, slap my younger self across the face and demand, “WHY DIDN’T YOU JUST GO TO DENTAL SCHOOL?” But in this moment, I feel good, and I think that counts for something. Rest assured that I am rolling my eyes at myself as I type this, but it’s true — you can’t put a price on happiness, or fulfillment or the sense of well-being that comes from indulging in the creative process. I have to write. There’s simply no other way to put it. And I feel extremely lucky to have found something in the world that fills me in such a way, something that I absolutely cannot live without.

To anyone else who worries that what they’re doing is silly and impractical and they should really be concerned about paying rent and taxes and getting a 401k and what even IS a 401k, here is my 100 percent impractical advice: Do what you love. Do what makes you happy. Do the thing that fills you with song. Five years from now, you can build your cardboard box house right next to mine.

Sophia Crisafulli already has a box of ramen noodles to use as a table in her cardboard box centerpiece.

I think you are on the right track. College should not be all about making money–it is an opportunity to pursue what you love. If you think about it, your major matters most for graduate school, but not so much for getting a job in the real world. Simply getting a degree is enough. Classicists work at banks and make good money. I am a classicist in graduate school and I make decent money. My best friend studies ancient egypt, also a graduate student, and she makes more than enough to support herself. Likewise, a good friend of mine majored… Read more »

I’m so proud of you! Bravo to have written such a passionate “credo” for literature! When I finished reading your article, I said aloud you GO Sophia! And I applaud you as I write this! ..Well…that’s a lie right there. I mean I’ll applaud **after** I write this!