The Daily Nexus
Music
LOUDPVCK turns Earl Warren into a Trap House for One Night
February 8, 2015 at 9:54 pm by Alex Bocknek 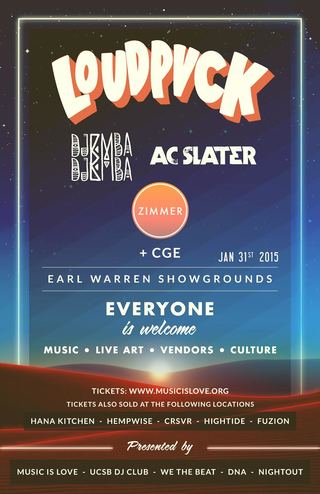 A hooded woman clad from head to toe in jet black “ǂ₩0ИK” gear stood in stark contrast against the perspiring orange walls of the bathroom hallway. Her bandana bounced onto the oversized hoodie with each hum of bass. A person in a T-Rex costume nearly shoulder-checked a shirtless python-armed man, skipping his way back to the dance floor. On Saturday, Jan. 31, this smorgasbord of unlikely companions gathered at Earl Warren Showgrounds for one reason — the all-star DJ cast of Zimmer, AC Slater, Djemba Djemba and, of course, LOUDPVCK.

Zimmer’s set was a good introduction to Saturday’s theme: Play a little something for everyone. Down-tempo grungy was the icebreaker as the French DJ began the long and grueling process of warming a crowd of standers.

As people trickled in one-by-one, the groove deviated from its original trajectory. Low bass hums gradually sharpened into intermittent synth stabs. Swaying began in the crowd, and cross-armed fraternity brothers tapped their feet.

Zimmer’s tropical remix of “Don’t Wanna Dance” echoed throughout the dome, as hip shakes possessed the small crowd of a few hundred.

Felix Dechant, longtime Zimmer fan, concluded that Zimmer’s set was a very traditional deep European set that didn’t really fit into the theme of the of the entire show. However, he went on to say that the set was very artfully crafted and performed its job of loosening the crowd.

Next on the menu was AC Slater. The Dim Mak DJ’s set was the closest thing to a club mix that evening and transformed the crowd entirely. Audience members were jumping and fist pumping to the guttural tribal sounds of Slater. “Woo’s” and chants could be heard over each layer of white noise.

While the crowd was visibly more energetic, Slater’s performance was largely unchanging with the occasional sprinkling of crowd-pleasing tracks like CoCo.”

Andrew Swanson, or Djemba Djemba as his diehard fans know him, spun the most versatile tracks of the evening. Swanson mixed everything from future bass to traditional trap to deep house to straight hip hop. Unfortunately, the track selection was slightly lower energy than the hard-to-please crowd needed. While there was a certain degree of moshing for hits such as “NRG” and RL Grime’s “Core,” in general the crowd was largely stationary, probably in anticipation of more big room house music.

Katelyn Carano, a hoop dancer hired for the event, offered an explanation for the lackluster prestige of electronic music performances in Santa Barbara. Carano implied that there is a much smaller scene of electronic music fans in SB than in other metropolitan cities like San Francisco or Los Angeles. As a result, Santa Barbara shows are usually comprised of partiers who have never heard of the acts, avid festival goers, traditional Kandi-wearing ravers and spiritual types that run the local transformative festival, Lucidity. As a result, DJs experience issues tailoring their sets to such a diverse audience.

However, nobody overcame this obstacle better than LOUDPVCK. The “Kill Bill” fight theme song blared through speakers as the silhouettes of Kenny Beats and Ryan Marks became visible behind the DJ stand.

After ten minutes of the loudest festival trap of the evening, Marks grabbed the mic and shouted, “That was the warm-up round!” The crowd danced with ferocity as PVCK dropped one festival standard after another.

To charge up the visibly tiring crowd, Marks put his lips to the microphone once again. “Who’s a ’90s baby out there?” he shouted. Dancers erupted as “California Love” bumped over the speakers followed by “Still D.R.E.” and “Big Poppa.”

“I graduated from Santa Barbara High School,” Marks said into the mic, a few minutes before the end of the show. The statement mustered the last ounce of energy remaining in the depleted showgrounds.

Ending with their latest Dada Life remix, LOUDPVCK said their thanks to a roaring crowd. While they did not spin the most innovative set, they knew their demographic and appropriately calibrated their gears. PVCK put on a good set but an even better show.