The Daily Nexus
Film & TV
“It Starts With the Script” Writer’s Panel SBIFF Panel Uncovers the Process and Art Behind Screenwriting
February 6, 2015 at 5:01 pm by Phi Do 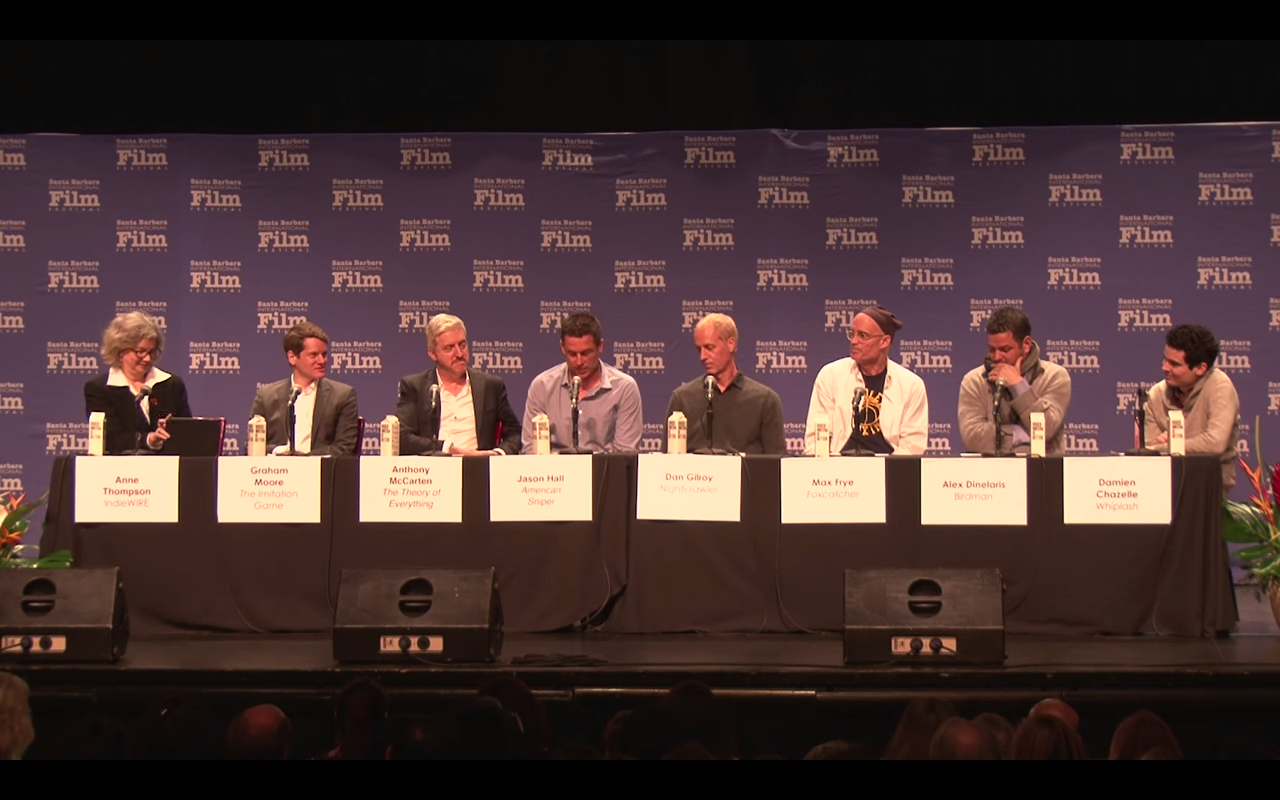 Like most Hollywood professions, the art and business of screenwriting is perplexing. Career paths don’t necessarily follow the same direction (although the formulaic nature of scripts themselves are debatable). “It Starts With the Script,” a writer’s panel presented by the Santa Barbara International Film Festival hoped to shed some light onto the craft of scriptwriting and the process of using pen, paper and keyboard to project stories onto the big screen.

Many screenwriters often begin work in different fields (journalism, novel penning, etc.), but quite a few have set their eyes on the movie industry from the get-go. Damien Chazelle (“Whiplash”) always knew he wanted a career in film and moved to L.A. from New Jersey. The first few years in the business found him writing for hire, doing scripts for low-budget horror and sci-fi movies until he finally found the opportunity to direct his own script.

“I was hoping to get my foot in the door,” Chazelle said, “and ‘Whiplash’ was my first thing that actually convinced people to let me in. But I think that’s only because I spent a few years in the trenches writing commercial stuff before I convinced people that a jazz movie is actually viable.”

Jazz was to Chazelle as journalism was to Dan Gilroy (“Nightcrawler”). After graduating college, Gilroy started writing in New York as a reporter and reviewer before deciding that writing screenplays (and working at home in his pajamas) was the way to go. But he never let go of his inner news junkie and sure enough, the control rooms of television drew him back and gave him the opportunity to fuse both passions within “Nightcrawler.” As an original screenplay, “Nightcrawler” gave Gilroy full reign to employ his creativity.

“Like most of us, I do a studio job and I felt increasingly constrained by the small box that you’re allowed to move in,” Gilroy said. “Everything has to be explained, characters needed to be redeemed, and so on. I was in an ornery mood so I wrote a script for myself in which I’d decided to break every narrative rule. But it just turned out that breaking all these conventions connected with the [Nightcrawler] world.”

Most scripts, however, don’t click as easily. Jason Hall (“American Sniper”) had “this tremendous responsibility and this great burden” to depict the heavy toll of war on the human psyche. Hall traveled to Texas in 2010 to meet Chris Kyle, the film’s real-life protagonist, who had left the military for about nine months. From the look in Kyle’s eyes to the way he fell on his knees to embrace his children, Hall immediately knew that this man had endured and suffered.

“It’s unnatural for humans to take a life,” explained Hall. “And so, in creating this movie, we sort of did things so that it becomes easier for them to create this character that could take a life. This is a movie about a soldier. This is a story about all soldiers in a way, exploring the archetype of the warrior and what the cost is to the soldier and what the cost is to his family.”

Hall wasn’t the only writer to adapt a screenplay from someone’s life story. Ever since he finished the ending of Stephen Hawking’s A Brief History of Time, Anthony McCarten (“The Theory of Everything”) was hooked. Writing a script about Hawking, however, wasn’t easy. McCarten didn’t want to make a movie using only publicly known facts, but Hawking didn’t allow investigation into his personal life. After reading Jane Hawking’s writing on her relationship with Stephen, McCarten took the initiative to ride a train to Cambridge and immediately declared his ambition to make a movie about her life. Brushing aside Jane’s immediate look of horror, McCarten hoped that if he was charming enough, he could have the signature for the book rights that afternoon. He waited for eight years.

“The interesting point of the film was that it was about the caregiver as much as it was about the cared,” McCarten said. “They had to break their own theories about what relationships are. They’re two very conservative people, but their situation provides them to be very heroic.”

For writers like Hall and McCarten, interest in someone’s life story sparked a desire to share it on the big screen. For those like Chazelle, past ambitions helped develop a screenplay with heart. For Graham Moore (“The Imitation Game”), it was both. As a teenager, Moore had a passion for computer science and was a huge Alan Turing fan. In adapting the screenplay, he put Turing’s mathematical genius at the forefront of his character, while simultaneously sparking a debate regarding the portrayal of homosexuals onscreen.

“He’s a mathematician who happens to be gay, not a gay mathematician,” Moore said. “The movie was never meant to be the last word on Alan Turing; it was meant to be the first word where we wanted people to know his name. His name should be known as well as Newton’s and Darwin’s. But it’s not, because he’s gay and he’s persecuted for it.”

Seeing as each panelist held a unique vision, it naturally follows that different writing strategies worked for different writers. Alex Dinelaris (“Birdman or The Unexpected Virtue of Ignorance”) likes to spend eight–nine months structuring a screenplay “to every inch of its life.” But often, he allows his subconscious to take over and handle the inspirational side of things.

“I have two babies and when I’m changing the diaper or cooking, that’s when the subconscious starts to work,” Dinelaris explained. “An idea will hit me and when they start to pile up to the point where I think they might suffocate me, I’d fly to that little place in Puerto Rico. Cell phone doesn’t work, internet doesn’t work but eight–nine days later, I’d come back with a draft.”

Max Frye (“Foxcatcher”) likes to take an old-fashioned route via yellow legal pad and felt pen. But when he takes it to the computer, the transcript is, in essence, already a rewrite. The blend of old and modern writing tools seems effective, though Frye admitted that procrastination was still an issue.

“I’d get to the point where I’d keep putting it off,” Frye said, “and then it’ll be 6 o’ clock and I’d go ‘Oh, well, it’s coffee time.’ But I completely changed my life by writing first thing in the morning without doing anything else. If I even go to the bank, I’m ruined for the day.”

Several panelists described similar experiences from hunting for inspiration to forcing oneself to work (Gilroy reported using stone as his writing tablet). While these were some of several recurring themes in the writers’ work, it’s clear that none of their careers started on the same course. Whether it’s utilizing the experiences from a past profession or revisiting a childhood passion, SBIFF’s writer’s panel showed that a story doesn’t necessarily start with the script as much as it starts with the heart.