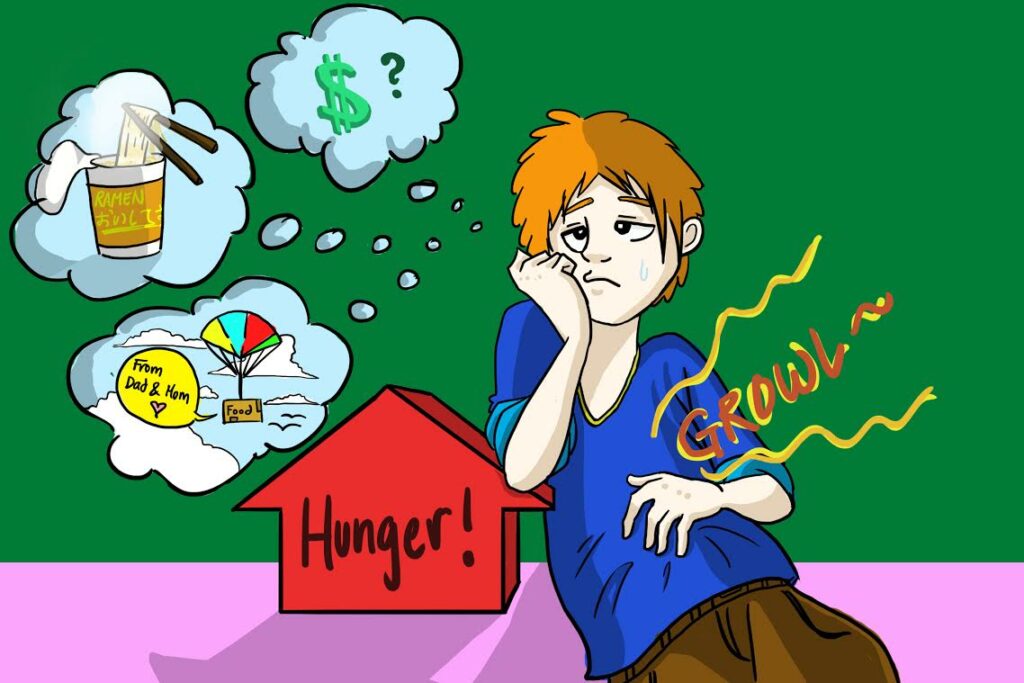 When one thinks of the concept of a “college student,” images of late nights with ramen noodles and cheap coffee may come to mind. But when one thinks of the term “food insecurity,” it is often associated with far-off notions of disenfranchised individuals in remote regions suffering from serious nutrition deficiencies.

Contrary to conventional beliefs, the two terms are not mutually exclusive but are increasingly synonymous as the number of students requiring food assistance is on the rise at universities across the country.

Students Battle Food Insecurity on Campus
At the 1996 World Food Summit in Rome, the World Health Organization defined food security as the physical state of the world that “exists when all people, at all times, have physical and economic access to sufficient, safe and nutritious food to meet their dietary needs and food preferences for an active and healthy life.” Food insecurity exists when any population cannot meet this qualitative standard, and now more than ever at universities across the country, food insecurity accurately describes the situation facing more and more college students today.

UCSB is no exception, with thousands of students relying on food banks and other programs to meet their basic nutritional needs, according to Associated Students Food Bank Coordinator Tuyen Nguyen.

When I do not have enough to eat, I start to feel nauseous but also helpless at the same time. I feel down and then a sense of worthlessness because I lack a basic human need. I start believing that I am somewhat worthless until I am able to acquire non-pricy food. – Fourth-year sociology major Manny Flores

Nguyen said there has been a striking increase this year in the number of students that use the A.S. Food Bank as compared to years past.
“In the last two school quarters, we serviced 2,000 which are half of what we have now,” Nguyen said.

According to fourth-year mathematics major Selene Esqueda, she has seen students who are not receiving sufficient food assistance resort to tactics such as looking through trash in order to feed themselves.

“Since I’ve been here at UCSB, since 2011, I have seen students grab some takeout boxes from the trash can,” Esqueda said. “I see how people post about free ramen noodles on Free & For Sale on Facebook and tons of people respond saying that they will take them. There are plenty of things like that which happen regularly.”

Fourth-year sociology major Manny Flores said he has grappled with the emotional and physical effects of food insecurity before.

“When I do not have enough to eat, I start to feel nauseous but also helpless at the same time,” Flores said. “I feel down and then a sense of worthlessness because I lack a basic human need. I start believing that I am somewhat worthless until I am able to acquire non-pricy food.”

Third-year global studies major Steven Frias said he struggles to focus on schoolwork as a result of hunger.

“I, personally, cannot concentrate if I am hungry,” Frias said. “It affects my studies and I can definitely do poorly because it has negatively impacted me before.”

These and other students both on campus and across the UC system face similar issues the Alumni Association,” Armistead said. “I think if students go to CAPS, OSL, EOP, or talk to professors, the staff can talk to Student Life and we can get the student with the resources that they need.”

According to Armistead, one reason many students continue to suffer from food insecurity and even dig through trash cans for scraps of disposed food is because they are “embarrassed [and] ashamed.”

“Sometimes people do not want to ask for help and that is why they are still foraging through garbage disposals,” Armistead said. “Sometimes, they are feeding other people at the same time. It is hard to ask for help and is embarrassing if they keep asking. I think there are many students who are financially struggling. Food insecurity affects the very core of their being.”

People feel uncomfortable using these resources. I know students who have suffered and are too prideful. Some students are too culturally proud to come into the food bank and get help. Pride can definitely be a factor because nobody likes to come forth and say that they have a problem. – A.S. Food Bank Student Coordinator Rachel Rouse

When simply finding enough calories to eat is a struggle, students face an especially daunting task attempting to eat a balanced diet or cope with food allergies and often cannot get enough nutritionally adequate food for themselves.

According to campus nutritionist counselor Betsy Reynolds, maintaining a healthy diet while relying on food assistance from groups on campus is challenging because of the inherently unhealthy nature of food offered by some programs.

“Eating lots of sodium that come from ramen Noodles from the Food Bank can be detrimental to your health,” Reynolds said. “If students eat this Monday through Friday, then it can be bad for you.”

According to Reynolds, the A.S. Food Bank does attempt to make healthy food available to students by providing lettuce, tomatoes and potatoes supplied by a “limited donation” from CalFresh, but the weekly supply is insufficient.

The trend of increasing reliance by students on food banks to meet their nutritional needs is not a scenario unique to UCSB.  According to a Michigan State University Student Food Bank study, the number of university food pantries has increased from four in 2008 to 121 today.

Nguyen said the modestly sized room serving as the A.S. Food Bank pantry often exacerbates the organization’s difficulties with providing food to the students that need it most.

“Space is an issue and a challenge which makes it hard to outreach to even more people,” Nguyen said.

According to Nguyen, although there are thousands of students who receive help, there are still “cracks to be filled” with students who struggle with food security but are not personally comfortable walking into the A.S. Food Bank.

“Outreach effort, students referring friends and conversations are what fill the cracks,” Nguyen said. “I want everyone to know that people are here to help and that anyone can experience hunger at any single time. We welcome everyone on a regular basis. We need help from students via peer-peer referral.”

Fourth-year biopsychology major and A.S. Food Bank Student Coordinator Rachel Rouse said students are not aware of the food pantries because they are not mentioned at freshman orientations.

“Students do not know about the food pantries. A big issue is that it is not introduced at freshman orientations,” Rouse said. “They do not know that they can have problems obtaining food after their first year of college with their dining commons meal plan. I do not know why it is not being addressed at orientations but it should.”

Rouse also said pride can be a factor of not receiving help because students do not want to personally admit that they have food-related issues to other people.

“People feel uncomfortable using these resources. I know students who have suffered and are too prideful,” Rouse said. “Some students are too culturally proud to come into the food bank and get help. Pride can definitely be a factor because nobody likes to come forth and say that they have a problem.”

Searching for Solutions to Hunger
Irlanda Martinez, a fourth-year economics major and head intern at Café Picasso, a hospitality and food pantry run by students to help students facing the issue of poverty and food insecurity, said it is “imperative” to solve the issue of food security because food should be the least of students’ worries.

“When students are paying thousands of dollars in tuition for a ‘public education’ the last of their concerns should be how they can afford food,” Martinez said. “How does our university expect students to be top-notch academics, when those academics are too busy listening to their stomachs?”

According to Martinez, access to healthy food is a basic human right, especially as university students focusing on completing their education.

“Students are constantly under high levels of stress, which tends to weaken their immune systems,” Martinez said. “If they are unable to afford nutritious food, their entire physical state is weakened, which obviously results in low academic performance … If you too worried about being hungry and whether you should pay for tuition, food, or rent, are you going to be able to get good grades?”

Many students go really hungry because students have to make choices between eating and paying rent or not eating and buying books … We do not have money to throw and we are suffering due to that. – Fourth-year political science major Marvin Ramirez

General Manager of the Isla Vista Food Co-op and alumna Melissa Cohen said food security is becoming more of a problem even though financial aid is offered to students in the UC system.

“It’s an issue that is getting bigger … and it affects students in different ways. People make the assumption that students get financial aid and that financial aid should cover food expenses, but this is not enough,” Cohen said. “One in six people in America are food insecure.”

Cohen said there are solutions to food security, but that students must make it known if they are hungry to receive the help they need.

“You can never tell if a person is hungry or malnourished and it might be helpful for students to let staff know that they are hungry. It is okay to ask for help,” Cohen said.

Cohen said she agreed with the widely held student perception that the rising cost of housing is contributing to the food insecurity crisis.

“The cost of housing is raising each year means that students are sacrificing more and more things,” Cohen said. “The easiest thing that students give up in order to save up for rent is a meal. This is a really big issue. If you are hungry it is really hard to think of anything else and focus on school assignments.”

Fourth-year political science major Marvin Ramirez said amidst the challenges of paying for tuition, rent, books and other expenses, students can be particularly vulnerable to food insecurity struggles.

“I absolutely believe that there is a problem with food security here at UCSB,” Ramirez said. “Many students go really hungry because students have to make choices between eating and paying rent or not eating and buying books … We do not have money to throw and we are suffering due to that.”

A version of this story appeared on page 3 of the February 5, 2015 print edition of the Daily Nexus.

What’s up with you millennials these days? It’s not much different in my day than in your day – we’d party, study, etc. The students not lucky enough to have their parents paying their tuition and giving them extra money on top of that actually got part time jobs. Imagine the horror! Actually work rather than just looking for handouts. This article makes me laugh (not in a good way).