The Daily Nexus
Recipes
Recreating Recipes on a Budget: the Pho Baguette
February 2, 2015 at 5:00 am by Kelsey Tang 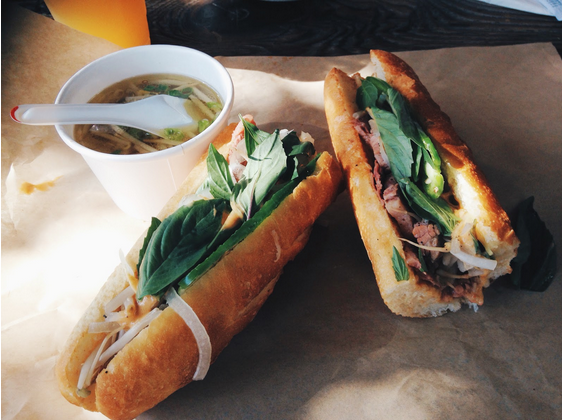 East Borough’s pho baguette; bahn mi accompanied with a side of pho. Photo by Kelsey Tang.

In this age of social media and sharing, one might find difficulty in evading photos of the most tempting new cuisines. Mac and cheese pizzas, sushi burritos and chocolate fried chicken — the world grows incrementally more imaginative, but our wallets remain strictly sealed to sustain a budget. The solution to these food woes? Recreate the recipes!

Grinding down to the specifics, I recently visited this unorthodox Vietnamese restaurant down in Costa Mesa called East Borough. Their menu consists of the usual southeast Asian goodies, such as chewy spring rolls and nutty vermicelli noodles. The fusion restaurant tends to attract customers seeking one of their specials, the pho baguette. Their pho baguette is composed of typical bánh mì(Vietnamese word for “sandwich”) ingredients: wedges of meat, cucumber, cilantro, jalapeños, signature sauces and pickled carrots. But East Borough’s pho baguette takes the ordinary bánh mì and then incorporates a side bowl of pho as dipping broth, influenced by the French dip au jus. The novelty dish totals $10, but one can easily recreate the pho baguette using simple and inexpensive ingredients. 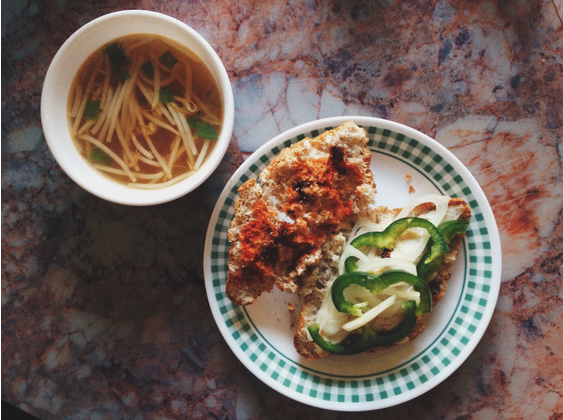 The recipe abides by flexible rules to accommodate a wide range of preferences. Tear open a loaf of bread to toast. Select a variety of vegetables to wash and slice (I chose green bell peppers and onion to complement the flavorful broth). Once the bread finishes toasting, spread as much sriracha sauce and hoisin sauce as desired onto one slice. Then pack in the vegetables and cooked meat of your choice. (You can find whole rotisserie chickens for less than six dollars at a local market.)

The supplemental bowl of pho requires venturing into an Asian supermarket to find any brand of instant beef flavor paste, or a couple clicks through Amazon will lead you to the holy grail. Once acquired, boil a small bowl of hot water and drop half a spoonful of the paste in. Garnish the broth with a handful of raw bean sprouts and green onions for extra crunch.

Light and filling, the pho baguette makes an interesting lunch for those craving a hearty crunch fixed with the traditional flavors of Vietnam. This recipe will get you the bang for your buck and a delight for any appetite.