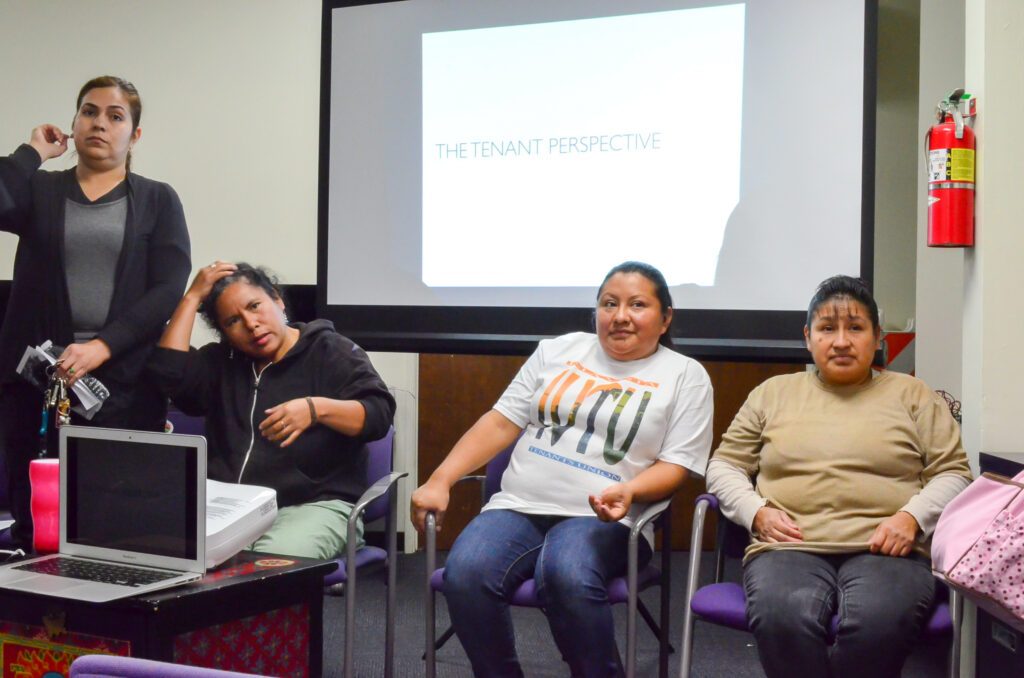 The evicted household members spoke at the housing forum held yesterday in the Pardall Center. According to former tenant Maria Hernandez, she was not notified of the eviction until two days before the deadline. Anna Kodelashvili/Daily Nexus

The Isla Vista Tenants Union (IVTU) hosted a housing forum titled “Tenants Reclaiming Isla Vista” at the Pardall Center in I.V. yesterday in order to gather attention and support for households evicted from their homes at 6754 and 6764 Abrego Road.

The forum was the first event in a three-day campaign to fight for relocation benefits of six long-term, low income residents who were evicted without justification from their apartments at Abrego Villas on Abrego Rd. in late August 2014. The forum included a presentation from IVTU representatives and a Q&A session with the evicted tenants.

According to Santa Barbara County Ordinance No. 4444, if five or more residencies are evicted from a property within 90 days, the management company is required to provide financial support in the form of “relocation benefits.”

Following their evictions, the apartments were allegedly renovated and the rent price increased by 50 percent. The tenants then contacted IVTU and an Associated Students Legal Resource Center and IVTU sponsored lawyer who then informed the tenants of the Ordinance 4444 violation potentially made by property owner Majestic Asset Management, LLC, entitling them to benefits under county law. When the tenants presented their case to Majestic, the property managers refused to grant them benefits and the tenants then challenged the landowner over the amount in small claims court, with a hearing scheduled for Feb. 11.

Tonight, we’re going to have an opportunity to hear from some of our neighbors. In hopes that, in the sharing of stories, we collectively can come away from this with a little bit greater understanding of what’s going on in the lives of the people that we see every day. – IVTU adviser and Assistant Director for Community Affairs Aaron Jones

Subsequent evictions have taken place over 90 days after the initial six evictions, which IVTU believe is part of an effort to avoid further requests for relocation benefits.

Brian Lezak of Majestic Asset Management, LLC said the company is not directly responsible for the evictions, and that the property owner did not break any rules.

“Majestic Asset Management, Inc. is not the owner of Abrego Villas, only the management company,” Lezak said. “The ownership complied with the rules and regulations as outlined in Ordinance 4444 and therefore did not violate any laws.”

Lezak said the facts have not been plainly presented, and that Majestic is prepared to defend the owner of Abrego Villas.

“Unfortunately, the facts that have been publicized have been significantly distorted and are not an accurate reflection of each individual’s situation, and we intend to discuss these facts openly when given the opportunity to do so in the proper forum,” Lezak said. “We will defend their position in court, which is the proper place and one which will ensure that both sides are given an opportunity to present all of the facts.”

Lezak said Majestic supports IVTU’s purpose, but maintains the company did not violate any regulations.

“Tonight, we’re going to have an opportunity to hear from some of our neighbors,” said Jones. “In hopes that, in the sharing of stories, we collectively can come away from this with a little bit greater understanding of what’s going on in the lives of the people that we see every day.”

According to Jones, while there are laws in place to protect renters, the law does not require property owners to provide any justification for evictions.

“The laws do not protect folks from just being evicted,” said Jones. “The property owners have a right, if you will, to evict without any just cause.”

Third-year economics major and IVTU president Andrey Bogdanov said issues affecting some I.V. residents should be minded by every student who lives in I.V.

“We believe that fair housing opportunities are for all, and all residents of Isla Vista should unite together to fight for this,” Bogdanov said. 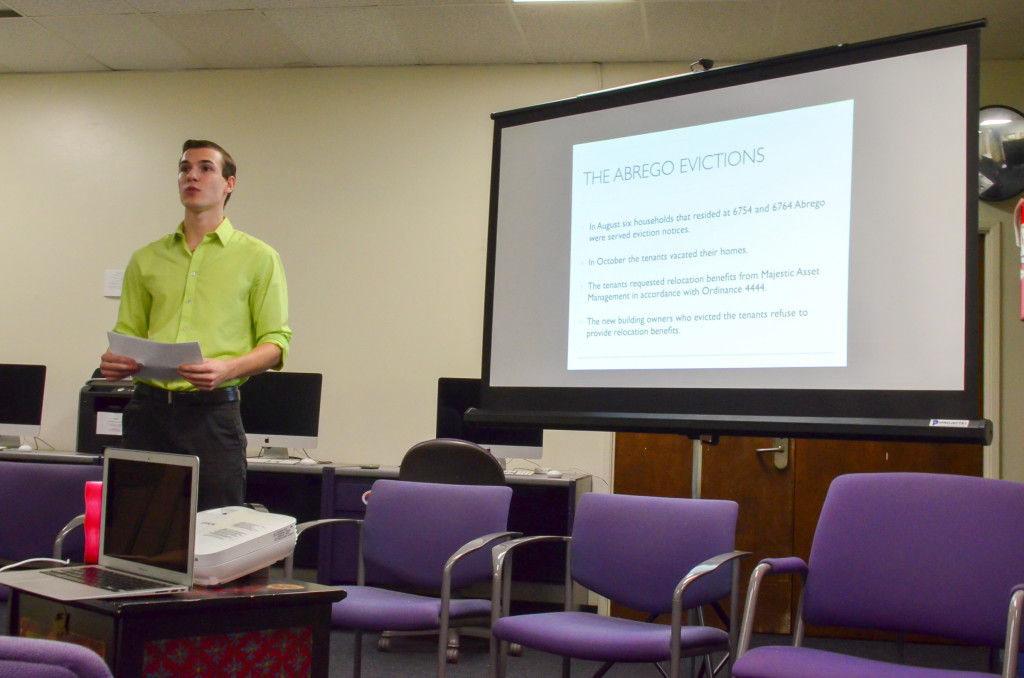 According to Bogdanov, the case will go to small claims court, where the tenants will ask that a superior court judge hear the case in order to bring more attention to their allegedly unjustified evictions.

“Isla Vista Tenants Union has sponsored and proved the tenants with a very qualified lawyer who has decided to take on their case,” Bogdanov said. “They have not broken any clauses in their lease in order to be served that eviction notice.”

Bogdanov said in a series of 2013 evictions from 781 Embaradero Del Norte, the tenants were served eviction documents in English, which they were then pressured to sign, despite some tenants’ inability to understand English.

Bogdanov said the tenants most recently evicted in October were not offered any justification for their evictions.

Maria Hernandez, a long-term resident and single mother, said she lived in the Abrego Villas for 11 years before receiving her eviction notice. According to Hernandez, she did not receive word of the eviction until two days before the deadline for them to leave.

“I came to the United States for a better future,” Hernandez said, “We are paying our rent, we are working … I don’t know why we are being discriminated against.”

Hernandez said she did not have time to find adequate housing after finding out about the eviction.

“I went to sleep in a church,” Hernandez said. “I don’t know what’s going to happen with us.” 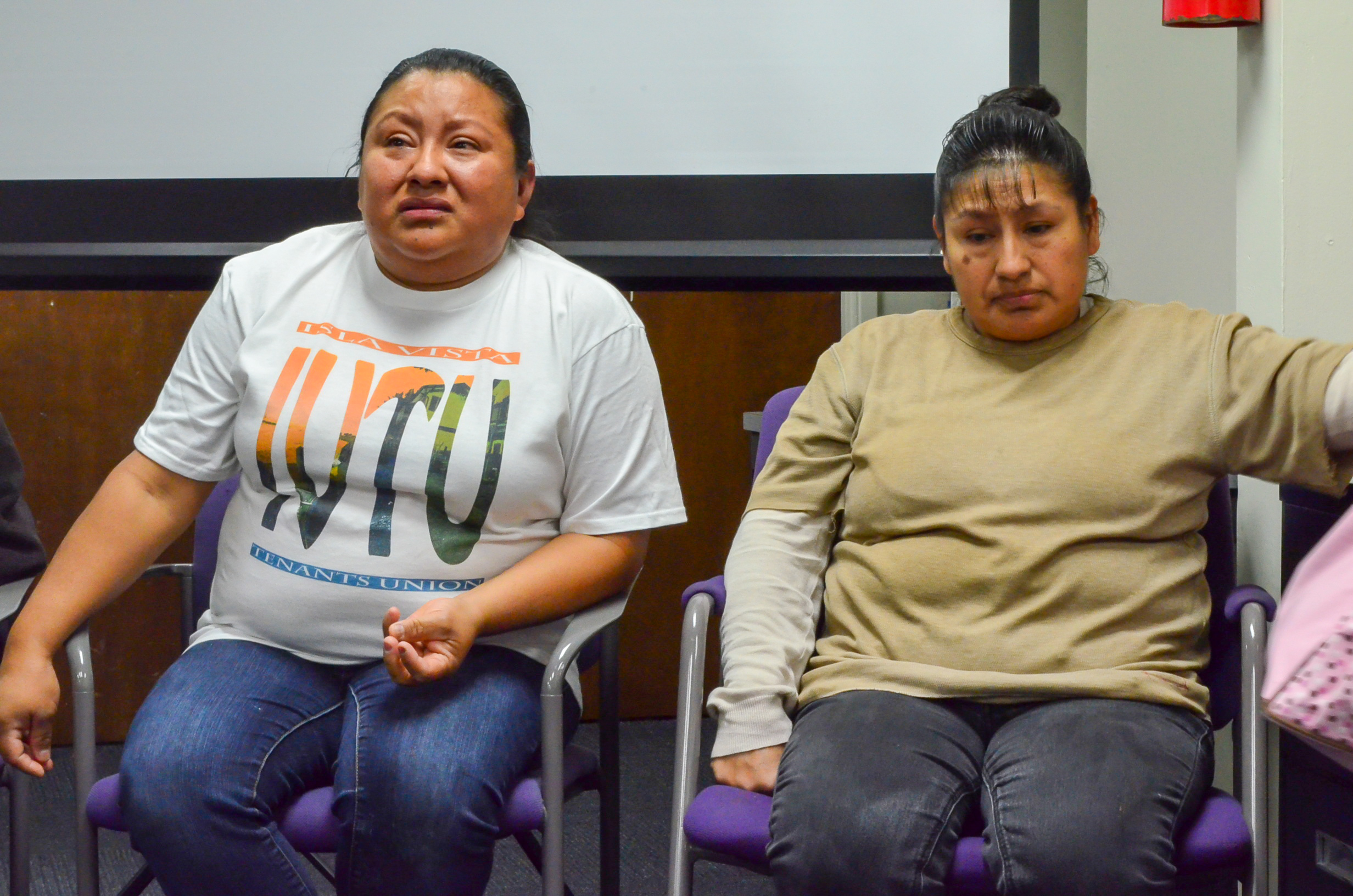 Upon eviction, owners told Hernandez she would receive her security deposit if the apartment was clean and if she cooperated with the eviction request, but wound up being denied a portion of the deposit, she said.

“We left everything clean and they still took money from the deposit,” Hernandez said. “They gave back 70 or 75 dollars.”

Valentina Hernandez had also lived at the Abrego Villas for 11 years before her eviction and said her daughter was pregnant at the time of the eviction. According to her, the eviction placed them in more desperate circumstances.

“Her baby was days from birth,” Hernandez said. “I didn’t know where we were going to go … we had to go to the house of my daughter’s teacher … we ate on the street.”

Vincenta Martinez, who lived in the apartments for 10 years prior to her eviction, said she had emigrated from Mexico to escape poverty and that she was unable to understand her eviction notice because of her limited understanding of English.

“When I received the notice, I read a little bit because I read only a little English,” Martinez said.

According to Adriana Delmarsh, who lived in the apartments for 13 years, she had been charged late fees for checks lost by the owners in the past and thought that that may have prompted her eviction. Martinez said attempts to cooperate with management were unsuccessful.

“I saw the notice and immediately called the general manager, Jackie Lopez,” said Delmarsh. “I called her but I did not get a response.”

According to Delmarsh, she would have had her neighbors help her understand the notice, but she works long hours and could not contact them.

“I work from eight in the morning until seven at night,” said Delmarsh. “I don’t have time for listening to my neighbors.”

Paola Villegas, a third-year history of public policy major, said her family was nearly evicted when she was eight years old and understands the tenants’ plight.

“Housing discrimination has been incredibly present in my life and their story resonates with me so deeply,” Villegas said.

“Housing is a right; it’s not a commodity,” said Villegas. “It’s so dehumanizing to see how they’re treated.”

[Correction: A previous version of this article incorrectly quoted IVTU president, Andrey Bogdanov, stating the five tenants evicted in October were tricked into waiving their rights. Bogdanov was actually referring to issues related to a series of evictions that occurred in 2013. This article has been updated accordingly.]

Not a Brain Surgeon

“Housing is a right; it’s not a commodity,” said Villegas. “It’s so dehumanizing to see how they’re treated.” ? The stupidity in this statement amazes me. This article leaves a lot open to interpretation. Assuming these people were on a lease, the landlord cannot evict a tenant arbitrarily if they were paying rent timely. I doubt they were “tricked” into signing a waiver to end the lease early. If they were on a month-to-month arrangement, the landlord has every right to terminate the agreement and rent to a new tenant. Some of you econ majors may have heard of something… Read more »