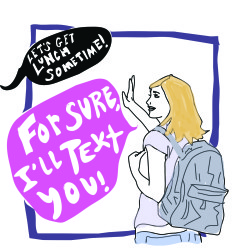 Back when our parents were our age, making plans with someone wasn’t a last-minute business. You would plan to meet someone for lunch days ahead of time and it would be expected that you would show up at that time. No one had cell phones and the ability to communicate on the go. Therefore it was imperative that you kept your word and met in the set place at the set time, because otherwise it would be difficult to contact people. People weren’t nearly as accessible, and therefore last-minute changes were far more difficult. Giving your word to meet somewhere seemed to hold more weight than it does today.

Try to remember how many times you have made plans with someone a week ahead of time and followed through with them. Rarely, right? How many times have you just shrugged off setting official plans because you “just want to see what happens” or “something else better might come up”? It is so common to wait until the last second to set plans. I see examples of this all the time, even in my own behavior. I will make plans with someone in advance, and then I will get a text inviting me somewhere else that day and will cancel my first plans without hardly a second thought. It makes me question whether we as a generation have a problem with commitment and responsibility. Why is it so hard to stick with a promise you originally made with someone? Is it because we have the option and the ability to change what we do, or is it because we have been conditioned to expect constant change?

I had this realization a few weeks ago when I had made plans to meet with a friend for lunch earlier in the week but forgot about our plans and overscheduled myself. I was able to text her minutes before we were supposed to meet and cancel. Then I started thinking about how awful it was that we had made plans a few days ago but it had been so far in advance I had just assumed that something would come up and that they wouldn’t happen. Then I started thinking about how commonplace this was. So often will I make plans with someone in advance but no one really takes them seriously and all of a sudden it is the time to meet and plans fall through. In my experience, it has become an expectation that people will flake on you.

A lot of times for me, I am so busy that I often don’t know when I will have free time. Especially in college when you have such limited time to yourself, scheduling your free time becomes a strategic event in which you must use every last minute to its full potential. My catchphrase has become, “I’ll text you later.” It is just convenient to not set plans when you know that you might be busy. I know that I am not alone in this sense. I hear that sentence almost every day. Whether it is studying, meeting for lunch or going out at night, the success of the venture is based upon that incoming text message. It is pretty much expected that the plan will not be carried out unless there is a confirmation text beforehand. Whether it is because your friend is so busy they actually don’t know when they will have free time or because they are waiting for something better to come along, it is a definite change from the lives our parents led two decades ago. People live in a state of waiting for something else.

In this way it makes sense that people leave everything to the last second. We are taught to seek the best for ourselves and in a world where you are presented with countless images of what other people are doing, it is natural to feel as if you are always waiting for something better. This is where FOMO (the fear of missing out) comes in. It can be excruciating to turn down an exciting invitation in lieu of something ordinary when you will be seeing Snapchats and pictures of all that you are missing out on. Each Instagram post or 10-second Snapchat image is like stab in the side reminding you of the bad decision you made by not going out or not participating in whatever event it was. I mean, LOOK AT HOW MUCH FUN EVERYONE ELSE IS HAVING!!! The longer we wait to commit to something, the more time we allow for bigger and better options to come in and land on our laps.

However, I hate that this temporary way of living is so accepted today. For example, I’m sure that everyone can agree that it is frustrating to go on a date with someone who refuses to make a decision as to where you are going or when until the last second (especially if it is a first date). “Want to hang out? I’ll text you later.” “Let’s get dinner sometime? I’ll text you later.” “Want to see a movie? I’ll text you later.” If this lack of planning annoys us with relationships, why doesn’t it annoy us when everyone else around us does it, or when we do it to other people? Being so interconnected allows for us to have last-minute changes in plans, which can be great, but it allows a decline in the appreciation of keeping commitments — something everyone should have.

Whether this “go-with-the-flow” behavior is considered good or bad, it is a subconscious behavior that I believe people should be aware of.

Katherine Anderson will definitely hit you up about the pregame at her friends house — unless, you know, she doesn’t.