The Daily Nexus
Sports
Gauchos Return Home for Battle of Winless Teams
January 29, 2015 at 5:00 am by Michael Jorgenson 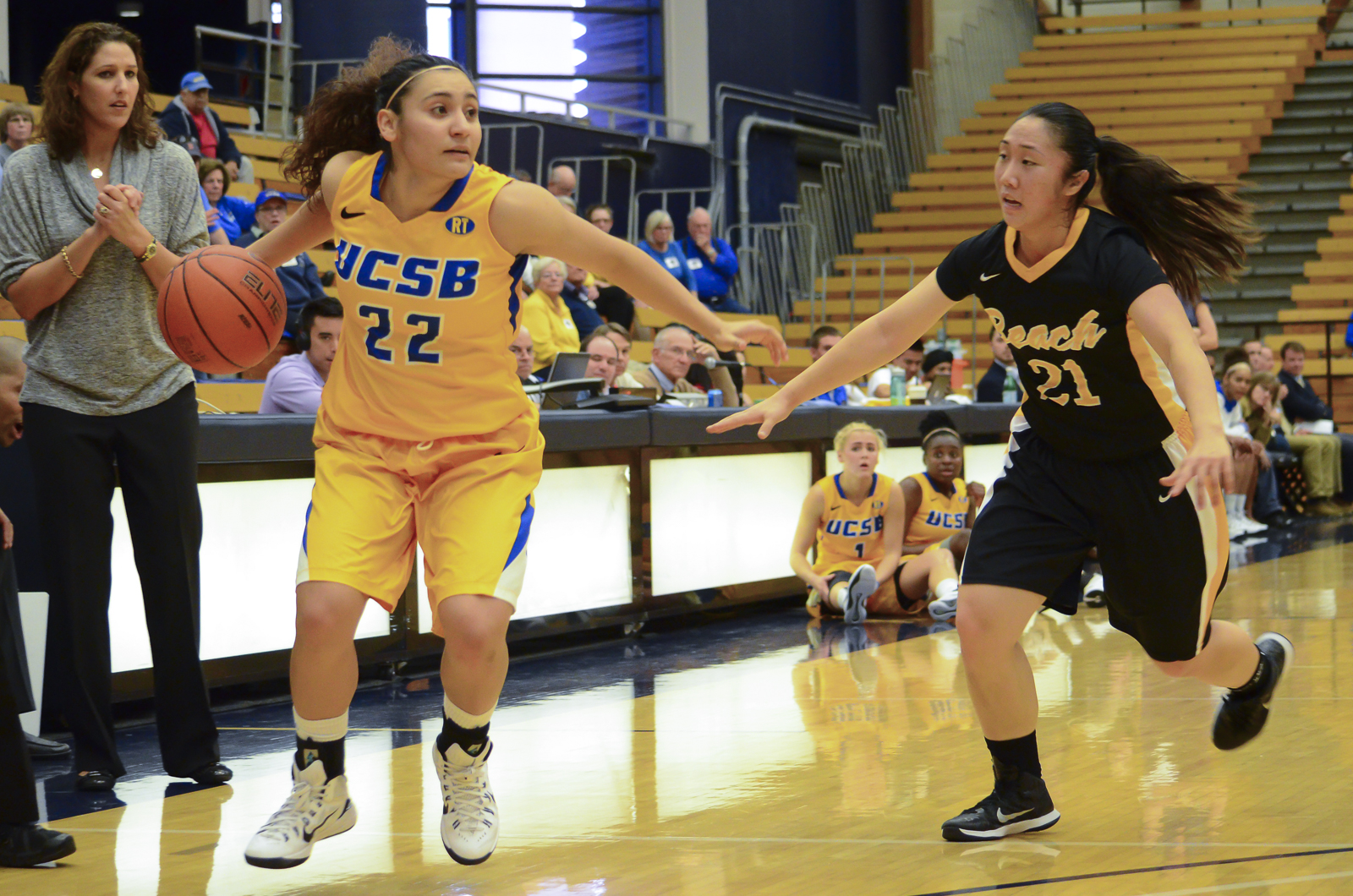 A pair of solid showings were not enough to give the UCSB women’s basketball team a victory last weekend, but it will get another shot at win number one with home games against UC Irvine and UC Davis this Thursday and Saturday.

Although the Gauchos enter the weekend with the Big West’s worst record at 0-18 overall and 0-5 in conference, they will have a chance to move up in the standings tonight when they play Irvine. The Anteaters have also gotten off to a 0-5 start in Big West games, but have the edge over UCSB with a 3-17 overall mark. The Aggies find themselves in a three-way tie for fourth place at 8-9 overall, 3-2 Big West.

“We’re just going to go in with the same mindset as any other game,” freshman guard Makala Roper said. “We’re just gonna play our game, move the ball offensively, get after it defensively and hope we get the win.”

While the season hasn’t gone as planned for these two teams, there is one thing we know about tonight’s matchup between the Gauchos and the Anteaters: someone is going to get their first conference win of the new year.

The most recent results may favor UCSB, as it has competed at a much higher level in its last two games. Against UC Riverside last Thursday, led by Roper and her career-best 23 points, the Gauchos put up 74 points on 54.5 percent shooting, both season highs, but failed to overcome a significant rebound and free-throw disparity.

“Offensively we’ve looked to get some more movement with high posts and reversing the ball a lot,” Roper said. “That’s created a lot of open jumpshots and we’ve been able to knock them down.”

Two days later, Santa Barbara found itself with the lead with just under 5:30 remaining against Cal State Fullerton, but fell just short, losing 54-50. The two losses may not be something to brag about, but they have shown definite signs of improvement for a team that has ranked last in the conference in a number of statistical categories for the majority of the season.

“It was nice that we were capable of putting up 74 against an athletic team like Riverside and it was probably just as refreshing to see us come back and get after it on the defensive end against Fullerton,” Head Coach Carlene Mitchell said. “I think we’re making progress in seeing that from game-to-game we may have to play a different tempo and style and try to find different ways to win as we come down the stretch.”

Roper has been UCSB’s top outside threat all year, accounting for over 60 percent of the team’s three-pointers on the year. Her 7.9 points per game is the second highest on the team, behind only sophomore point guard Onome Jemerigbe, who averages team-highs of 8.3 points and four assists per game.

Senior guard Kristine Brance has also been a big part of the Gauchos’ improved play. In the last two games, Brance has gone 10-16 from the field, including 4-7 from downtown, as she led the team in scoring on the two-game road trip.

The Anteaters bring to town the only offense in the conference which shoots a lower three-point percentage than the Gauchos, a category which UCSB ranks last in defensively by a mile. This may give the Gauchos the upper hand, as they would have enjoyed a number of wins so far this year if not for their inability to stop the three-ball.

“Irvine’s extremely talented athletically. I know they lost their go-to player Camille Buckley last year, so maybe they haven’t found the rhythm of their team either,” Mitchell said. “But I don’t think it’s a cakewalk at all. Irvine is just as talented as a lot of teams in the Big West.”

Saturday’s matchup against UC Davis will be a completely different story. The Aggies rank No. 1 in three-point shooting in the Big West, knocking down 39.2 percent from long-range. They are led by the conference’s top outside shooter in senior guard Kelsey Harris, who shoots an incredible 48.4 percent on threes.

“Davis is blue collar. We know all five players on the court can shoot from the three-point line and we’ll just have to bring our A-game on the defensive end of it,” Mitchell said. “We’ll probably have to play a small lineup and make a lot of switches, and we’ll need discipline from tip-off to final buzzer.”

Thursday’s game against Irvine is set to tip-off at 7:00 p.m. and will be played on Teacher Appreciation/Superhero Night. Saturday’s matchup with Davis will begin at 2:00 p.m. Both games will be held in the Thunderdome.