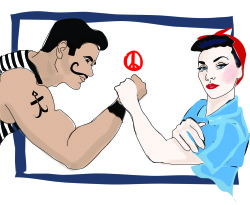 The world is full of mysteries to which I will never know the answers. How is it possible that the universe is still expanding? Who was the Zodiac Killer? What exactly is a “down” in football? But one of the most perplexing situations I’ve ever encountered, the one that I simply cannot wrap my brain around, is when strong, smart, independent women (and men, for that matter) decline to identify themselves as feminists.

The word “feminism” has always been surrounded by some degree of controversy. Granted, it can be difficult to defend a term whose actual definition is often called up for debate, and there’s no way of circumventing the fact that every individual has a unique relationship with any given word, but that won’t stop me from doing my best to convince you that there is nothing scary about feminism. I believe that much of the outrage surrounding the concept of feminism is unfounded, or based on a lack of real comprehension.

Being exactly the same and receiving equal rights are entirely different, and it’s the latter that we’re fighting for here. The most basic, dictionary definition of feminism reads as “the belief that women and men should have equal rights and opportunities.” In other words: we are all humans and all deserve to be treated with respect. This statement should be about as controversial as whether or not chocolate chip cookies are delicious.

I’ve also noticed a distinct tension between the ideas of feminism and femininity. There’s a notion that in order to be a feminist, you must be a man-hating, bra-burning unshaven symbol of rebellion. This is only a part of the equation. Sure, if you want to set your lingerie aflame and free yourself from the shackles of the razor, then more power to you. But this isn’t the only way to be a feminist. Personally, I prefer my legs smooth, and my bras are (mostly) free of singe marks. I don’t hate men. I like wearing makeup. This does not in any way prevent me from calling myself a feminist. I have every right to wear a frilly pink dress and still believe that the amount on my paycheck should have nothing to do with my anatomy. Femininity and feminism are not mutually exclusive.

Some women reject the label because they feel it places them in the unwanted role of “victim.” Others believe that to identify as a feminist is to blame men for everything, and to reject responsibility as a capable member of society. Still others argue that if you actually are a strong, smart, independent woman, then you clearly don’t need feminism because, well, you’re doing just fine without it. My response to this is as follows: first I laugh, then I become angry and yell at my computer screen for a while, then I start reading Wikipedia articles about Susan B. Anthony and other awesome historical ladies who worked so hard to ensure that women got the rights they did, and do, deserve. Feminism is not victimization. It is not man-blaming. And, given that the battle Susan B. Anthony and her awesome historical comrades started is far from over, it is certainly not unnecessary.

This world is an amazing place, but one not-so-amazing part of it is the fact that since the beginning of human existence, women have experienced just about every form of oppression imaginable. The reason that this oppression is less prevalent today than it was, say, 100 years ago is not in spite of feminism, but precisely because of it. If you are a woman who truly feels that in all of your life, you have never experienced inequality or judgment based on your gender, I want you to know that you are very lucky. I also want you to know that you are in the minority. So many women have devoted their lives to fighting for the rights that we have today, many that we could never imagine life without. There are women around the world who still don’t have these rights, who are still fighting every day to be treated as human and worthy. To think of feminism as passé is to turn a blind eye not only to centuries of suffering, but to mistreatment that is still very much alive.

Let’s keep this simple: why exactly do we need feminism today? Because women still aren’t paid as much as men. Because women are underrepresented in government. Because women have to answer to laws that tell them what to do with their own bodies. Because across the globe, girls are denied access to education for no reason other than the fact that they are girls. Because women are awesome and capable of doing incredible things and deserve as much respect as anyone else.

Feminism is not over. If you believe that sex and gender should not be indicative of a person’s capabilities or mental capacity, and that both men and women should receive equal rights as inhabitants of this planet, then please stand up! I’m asking all you strong, smart, independent ladies and gents to come join me on the feminist front. It’s not scary, and I promise, you don’t even have to burn your undergarments — unless you really want to. I won’t stand in your way.

Sophia Crisafulli tried to burn her bra once, but then realized that it cost $40 and chickened out.

I remember in Dr. Kalman’s US History course at UCSB she posed two questions to the class. First, How many of you consider women and men to be equal, and almost the entire class raised their hands. Next, she asked how many of you consider yourselves to be feminists, and myself and few others still had their hand raised (the course was in Campbell Hall). She went on to give the definition of feminism, to which most of the class was dumbfounded. Furthermore, Dr. Kalman went on to explain that it was the conservative backlash to the 1960’s through a… Read more »

Right on!!! Love your writing.