The Daily Nexus
News
Reporter Lectures on Nazis in Cold War America
January 27, 2015 at 2:12 am by William Leiva 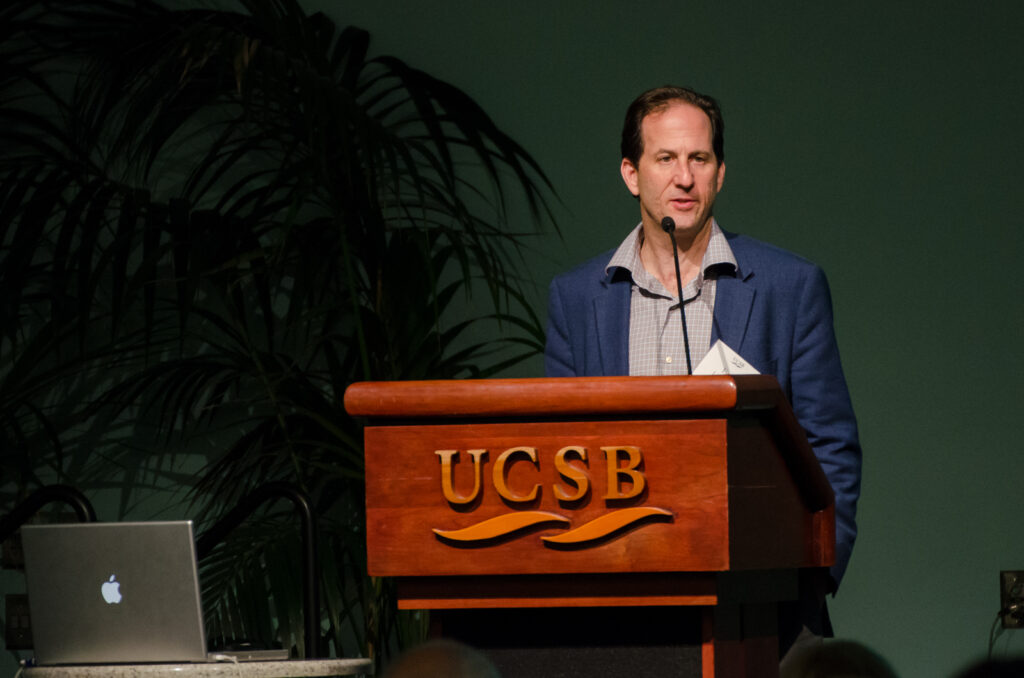 Pulitzer Prize-winning journalist Eric Lichtblau details his findings in the investigation of the Nazis sponsored by the U.S. government after World War 2. Alex Nagase/Daily Nexus

Lichtblau presented recently discovered documents that discussed how Nazis were used as spies and scientists by the U.S. military and intelligence services in order to aid the race against the Soviet Union to reach the moon in 1969 via Operation Paperclip. The talk ended with a free book signing in honor of Litchtblau’s latest book entitled The Nazis Next Door, which took place at the entrance of Corwin Pavilion.

According to Lichblau, despite the American populous’ opposition to aiding Nazis, U.S. intelligence agencies undertook various secret efforts to protect them once they got to American soil.

Lichtblau said that Nazis in America were paid with commodities for their work during what he called a “horribly difficult truth” in American history.

“They were perceived as lazy, filthy, thieves, liars and double agents,” Lichtblau said. “But, they were still used by the U.S. in times of war and were offered packs of cigarettes and alcohol in return.”

Nazi scientists clearly brought technological advantages to the U.S. by giving us a leg up on the Soviets to reach the moon in 1969 – Pulitzer Prize-winner Eric Lichtblau

According to Lichtblau, the living conditions of Nazis in America were “shameful” because they were “easily” allowed to live in the U.S. while their Jewish victims “horribly” suffered in concentration camps.

“The ease of allowing Nazis in America, in my view, is shameful and is a really untold period in postwar history as thousands of Nazis came to America after the war,” Lichtblau said. “It was horribly easy for them to come and horribly difficult for the liberation of Jews in America. I cringe at this sight.”

Lichtblau said that although Nazi scientists aided American scientists in developing technology to go the moon in 1969, their cooperation with the government is considered “horrible.”

“Nazi scientists clearly brought technological advantages to the U.S. by giving us a leg up on the Soviets to reach the moon in 1969,” Lichtblau said, “Without them, we realistically might not have entered the moon in 1969,”

Litchblau also said that there were a few “good” spies that helped the U.S. perform tasks that they could not accomplish on their own.

“There were some good Nazi spies that translated documents, control zones of Europe, intercepting cables, and doing other tasks that the U.S. could not do themselves,” Litchblau said, “Some of these were anti-Soviet spies whom were rewarded.”

I would never have imagined that Hitler’s men would be offered work in the U.S. I always thought that the U.S. never favored Nazi ideals or people during postwar times, and I am wrong. – First-year religious studies major Kevin Jim

According to Litchblau, the anticommunist sentiments shared by the U.S. and Nazis in America allowed Americans to channel anticommunist Nazi sentiment into work.

“Anticommunists sentiments were behind the Nazi achievements because the U.S. was against communism and this helped,” Litchblau said. “There was a notion that nobody hated the Soviets more than the Nazis and the U.S. wanted to put this hatred to work.”

First-year religious studies major Kevin Jim said he was alarmed that Nazis were secretly protected by the American government and that the actions of the intelligence agencies “feels gross.”

“I would never have imagined that Hitler’s men would be offered work in the U.S.,” Jim said. “I always thought that the U.S. never favored Nazi ideals or people during postwar times, and I am wrong.”

“Currently knowing that Nazis aided Americans with scientific and spy-related achievements, it helps me to see them as a little less worse than I previously thought of them,” Miller said. “It is mind-blowing to have my perspective change.”

Psychology professor Kristen Macuga said she was “quite shocked” to learn about Operation Paperclip, since she grew up in the post Pearl Harbor-era where the U.S. was portrayed as heroic in the post-World War II historical narrative.

“It is quite shocking to know this,” Macuga said. “I was born weeks after Pearl Harbor in a place that made it seem that Americans were heroes who freed Jews from concentration camps. It is shocking to know that we allowed Nazis to aid us.”