The Daily Nexus
News
Goleta Contemplates Parking Permits for Deltopia
January 23, 2015 at 1:01 am by Erica Loera 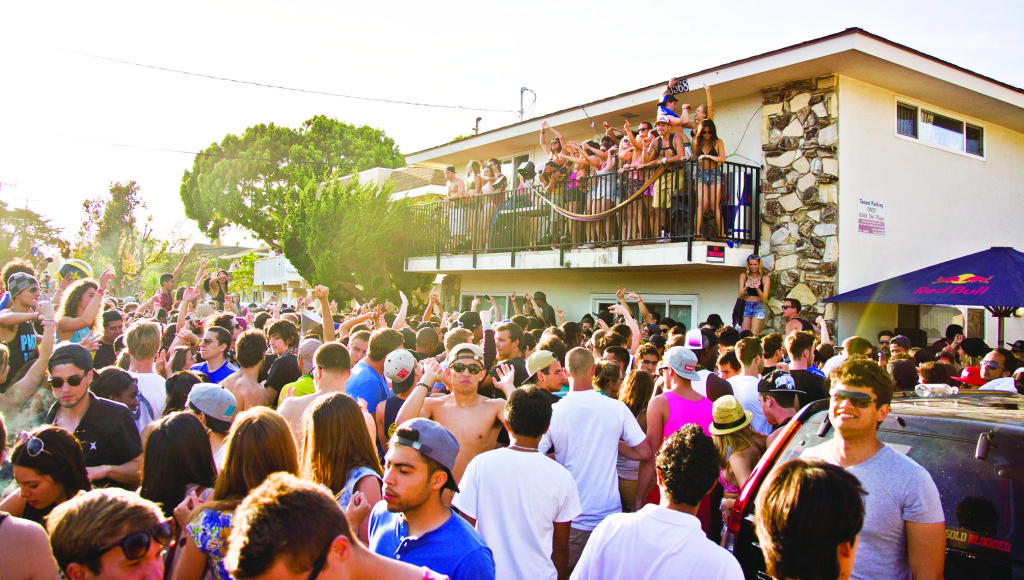 The City of Goleta is investigating the possibility of issuing parking permits to residents in order to discourage visitors, who flock to Isla Vista by the thousands annually for Deltopia (above), from parking in local communities. Daily Nexus File Photo

The Goleta City Council decided to consider a plan on Tuesday to use parking permits to discourage out-of-town visitors from flooding Isla Vista during Deltopia this April, a method used in October to limit crowds during Halloween.

Under the plan, parking permits for certain areas of the City of Goleta will be issued by mail and posted in the windows of residents’ cars during the weekend of Deltopia, taking place this year on April 4. The annual event typically attracts thousands of out-of-town visitors, whose presence creates parking issues for portions of the city over the weekend. The parking permits would be issued for neighborhoods south of Hollister Avenue between Cannon Green Drive and Storke Road to the city limits, the same area issued parking permits for Halloween.

“At the end of the day it doesn’t matter how inconvenienced we or the residents of Isla Vista are, it all boils down to if everyone got home safe,” Plastino said. “That’s my number one concern is that you guys are safe.”

Plastino said one of Goleta’s concern about Deltopia is the number of attendees expected to show up and how the city will protect its residents from the influx.

“As a city, they are definitely concerned with an influx of outsiders flooding the city streets and potentially parking in front of people’s houses and now the people that live in those houses don’t have parking spaces,” Plastino said. “They’re looking at it as a city that needs to protect its residents, and it’s a good idea for them to do that because it would help us keep the outsiders to a minimum during Deltopia.”

Plastino said the parking permits would help deter outsiders from the event if available parking is minimal, and a decrease in visitors could mean less injuries and damage to I.V. and its residents.

“It’s a concern of mine because my job is to make sure the public of Isla Vista is safe, and that means anyone in Isla Vista, whether that is outsiders or locals,” Plastino said. “I have to make sure that the property of residents remains as safe as possible too.”

According to Goleta City Council Public Information Officer Valerie Kushnerov, an issue with permitting over Halloween was lack of adequate permits available per resident. Kushnerov said permits would be mailed out to an entire apartment complex rather than each unit, which left multiple residents without protection offered by the permits.

Kushnerov said the city had undertaken preliminary research and action to ensure more residents receive permits in the event of restrictions.

“We’ve already researched the area and updated our lists, so that the lists we give to the mail house will be more accurate next time,” Kushnerov said. “There will be additional costs because there’s more postage required to send out more permits, but those costs are minimal.”

Kushnerov said although the rain could have been a major factor in Halloween’s low attendance, the council believes the permits could be very beneficial, especially with the citizens approval during Halloween.

“Last year was an interesting year in terms of Halloween because of the rain, so we don’t have a great picture of what impact the parking permits played,” Kushnerov said. “What we do know is that our residents were very happy that the city put in place a program to help minimize impacts to their neighborhoods during Halloween and have asked the city council to continue the program for future events.”

Santa Barbara City College fourth-year psychology major and I.V. resident Austin Thomas said parking is a major problem in I.V. even when there is no event on the weekend.

“The streets near my house are always crowded, so at times it can be hard for me to find parking by my own house,” Thomas said. “It can get really frustrating because those people might not even be residents, but out-of-towners here for the weekend.”

Thomas said he thought the use of parking permits would ensure that residents have guaranteed parking during Deltopia and will allow them to enjoy the festivities without worry.

“I would feel better for the safety of my car and my house if I knew it was just residents parking in our neighborhoods,” Thomas said. “It would be a lot easier to enjoy Deltopia with that peace of mind.”