The Daily Nexus
News
IVTU Fights for Evicted Tenants
January 22, 2015 at 5:00 am by Peter Mounteer, Supriya Yelimeli and Jackson Kerr 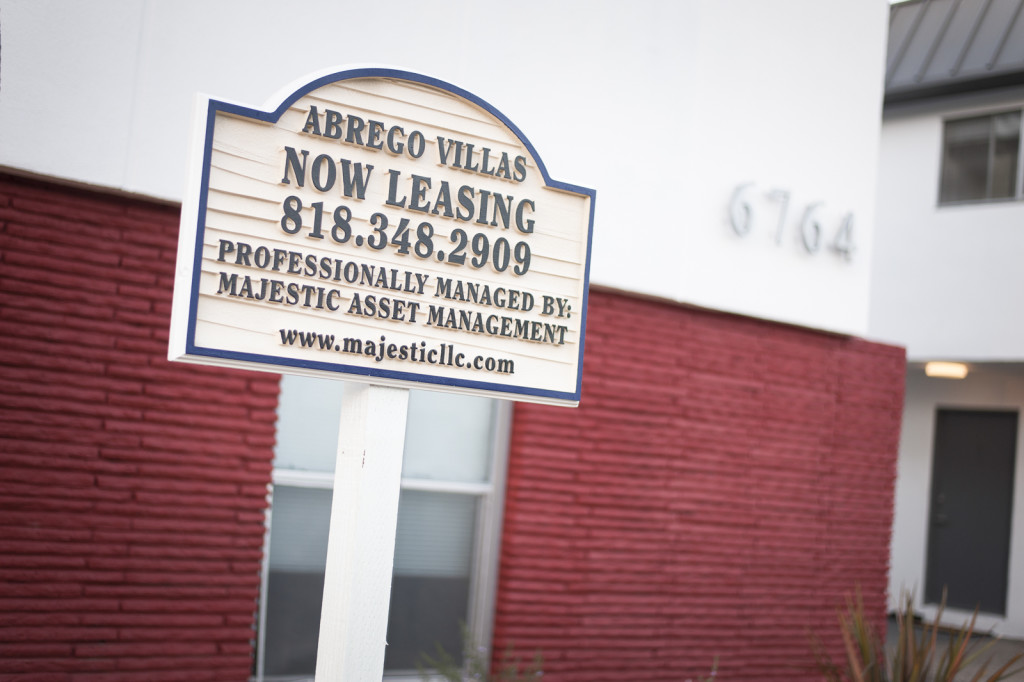 In August 2014, six households were served eviction notices at different residences on Abrego Rd by their landlord. The eviction notices gave the tenants, all low-income long-term residents, 60 days to vacate the apartments, according to the Isla Vista Tenants Union. Lorenzo Basilio/Daily Nexus

The Isla Vista Tenants Union (IVTU) announced the beginning of a campaign on Tuesday to provide required financial assistance to five households allegedly evicted from Abrego Villas on 6754 and 6764 Abrego Rd. in Isla Vista this past October.

Following the evictions, which were issued without justification by Abrego Apartments, LLC, under Van Nuys property owner Majestic Asset Management, LLC, the units in Abrego Villas were renovated and the rent was allegedly increased by over 50 percent, which made the units too expensive for former tenants to re-enter. These cases are the latest in a series of past evictions, and under Santa Barbara County Ordinance 4444, individuals evicted from households on County land are entitled to relocation benefits in certain circumstances.

In August, six households were allegedly served eviction notices by their landlord at 6754 and 6764 Abrego Rd., one in one building and five in the other. According to the IVTU, the eviction notices gave the tenants — all of whom were low-income, long-term residents, and many of whom were Latino families — 60 days to vacate the apartments.

The tenants then contacted IVTU and an Associated Students Legal Resource Center and an IVTU-provided lawyer who then informed the tenants of the Ordinance 4444 violation potentially made by Majestic Asset Management, LLC, entitling them to benefits under county law. When the tenants presented their case to the property owner, Majestic Asset Management, LLC refused to grant them benefits and the tenants challenged the landowner over the amount in small claims court, with a hearing scheduled for Feb. 11.

According to the Advising Attorney at the A.S. Legal Resource Center Robin Unander, Santa Barbara County Ordinance 4444 does not take effect in every situation.

“The interesting thing about the ordinance is that it applies under very limited circumstances,” Unander said. “So what we’ve seen, because these property owners are not coming forward when they decide to make these changes is, they don’t tell the residents, ‘Oh guess what we’re gonna do all this, but we’re gonna offer you some relocation benefits.’”

This does affect the whole community. It’s not just these families, it’s the entire community. Many of them work full-time job and have kids in schools. Some of them had to move kids to new schools and find new jobs. — IVTU President Andrey Bogdanov

Unander also said each evicted household is entitled to up to $10,500 in benefits, paid by Majestic Asset Management, LLC, under Ordinance 4444.

“We’ve made that known to Majestic and they said, ‘We’ll give them a $1,000 and a security deposit.’” Unander said. “So when we weren’t able to get past that in November or December when it stalled, we filed small claims.”

However, Majestic Asset Management, LLC has taken the position that the Ordinance 4444 does not apply to them, Unander said.

According to IVTU President and third-year econometrics major Andrey Bogdanov, the property owners attempted to remedy the situation by canceling some evictions, but the effort came too late as the tenants had secured replacement housing by the time the offer was made.

“Even if they were allowed to stay they couldn’t technically move back in because they can’t have two leases at the same time,” Bogdanov said, “or even if they could move back in, even if that was legally possible, they wouldn’t be able to afford the rent.”

Representatives for Majestic Asset Management, LLC could not be reached for comment.

According to Unander, Majestic Asset Management, LLC evicted a select number of their tenants and made sure to do no renovations that required permits so as to not trigger the benefits enacted by Ordinance 4444. She also said that once the County became aware of what Majestic Asset Management, LLC was doing, the county ordered the company to cease until they acquired permits. However, the tenants had already signed permanent contracts to live elsewhere when the company offered them the chance to come back.

“That’s one of the things that takes them out of the benefits,” Unander said.

Currently, the housing market in I.V. is significantly saturated, allowing unexpected evictions to substantially alter the livelihoods of some residents, especially if they are low-income or have children, Bogdanov said.

“This does affect the whole community. It’s not just these families, it’s the entire community,” Bogdanov said. “Many of them work full-time job and have kids in schools. Some of them had to move kids to new schools and find new jobs.”

Bogdanov also said the eviction timing has put a toll on tenants who have consequently had to struggle to find housing.

“Because they weren’t evicted during the leasing season, in October it’s very difficult to find quality housing in,” Bogdanov said. “Six tenants may not seem like a large number, but since 2002 over 300 households have been evicted.” 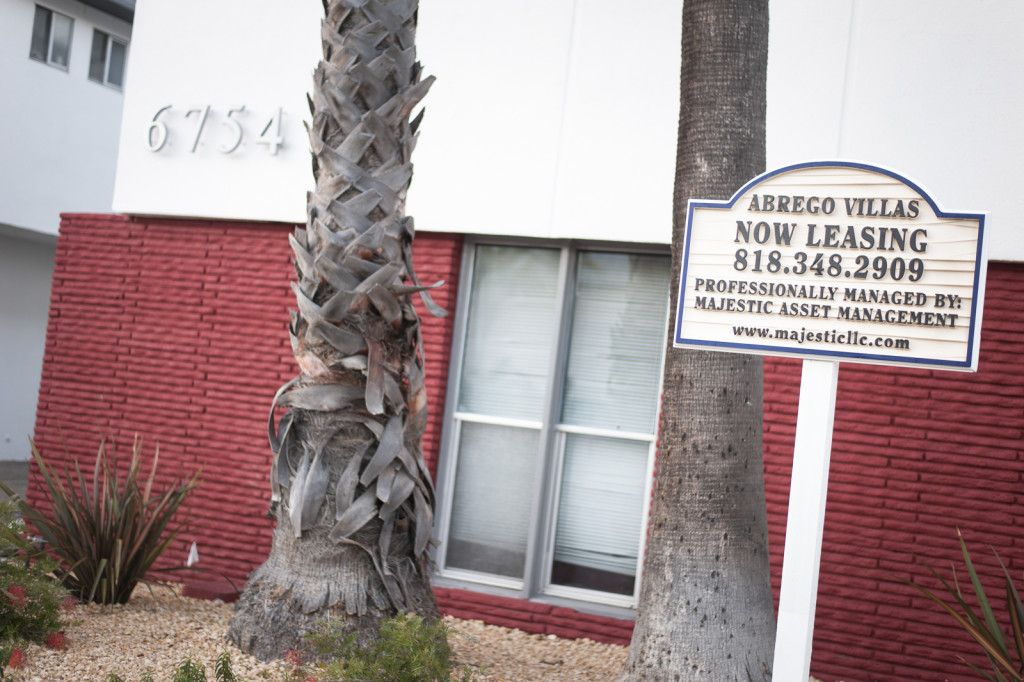 The Isla Vista Tenants Union has recently undertaken a campaign to offer financial support to tenants that were evicted without notice last August. According to Senator Hannah-Beth Jackson, property owners and landlords have a responsibility to help relocate evicted persons under Ordinance 4444. Lorenzo Basilio/Daily Nexus

According to California State Senator for Santa Barbara County Hannah-Beth Jackson, property owners and landlords of the Abrego residences have a responsibility to assist evicted persons in relocating under Ordinance 4444.

“It’s my hope that ultimately there will be an agreement so that these benefits are exercised. I mean, these folks were evicted, in fact, as far back as October. This is something that has some immediacy to it,” Jackson said. “…and this is a responsibility that the landlord has … signing onto this was to show my public support for the advocacy being done by the tenants union on behalf of these families.”

Jackson said her staff is looking into possible loopholes in the ordinance that could create problems for tenants so that her office can work to address them.

“I’ve got my staff participating in looking into this [ordinance] and I know there’s going to be a meeting towards the end of this month which they’ll be attending on my behalf while I’m in Sacramento,” Jackson said.

I think most students, most residents, and almost of all the students and residents in Isla Vista, are equally troubled that this is happening, not just that these families have been displaced, but that these things are occurring in essence right next door to many of us, the same neighborhood where we live, learn, eat, all that stuff. — EVPLA Cameron Schunk

“I think it’s when the property changes hands and we have these property management companies come in from out-of-town and don’t know the rules and seem to act in a rather imperious fashion that we start to have issues,” Farr said.

External Vice President of Local Affairs (EVPLA) and fourth-year psychology major Cameron Schunk said he is “completely disgusted” by the recent evictions at the Abrego Villas.

“I think most students, most residents, and almost of all the students and residents in Isla Vista, are equally troubled that this is happening,” Schunk said, “not just that these families have been displaced, but that these things are occurring in essence right next door to many of us, the same neighborhood where we live, learn, eat, all that stuff.”

According to Jackson, property owners are taking advantage of I.V.’s tendency to attract many middle-to-high income students willing to pay large sums for rent, causing less advantaged individuals — many of whom are Latino families with children — to leave their homes due to high rent. 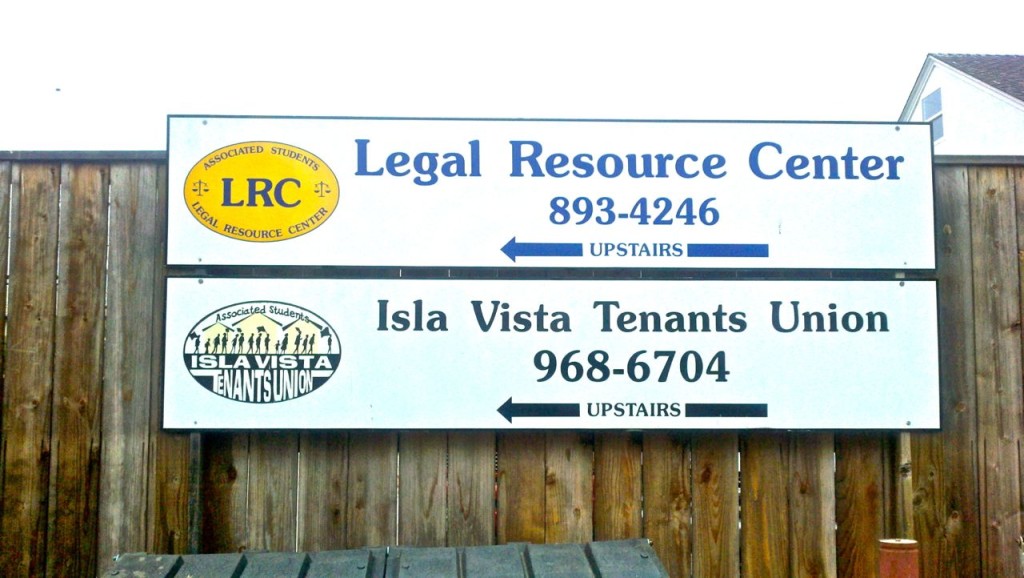 “Property owners are using the area and its relationship to the university as a way to increase rent and charge rates that are basically forcing community people to have to vacate their home,” Jackson said.

Unander said she did not want to “defame” Majestic Asset Management, LLC, but that their actions have been “not a very passionate community response.”

“That’s not their priority. Their priority is investment, not in people and the community,” Unander said. “They’re going to continue to invest in SB and they’ll probably buy more properties in I.V.”

A version of this story appeared on page 1 of the January, Thursday 22, 2015 edition of the Daily Nexus.