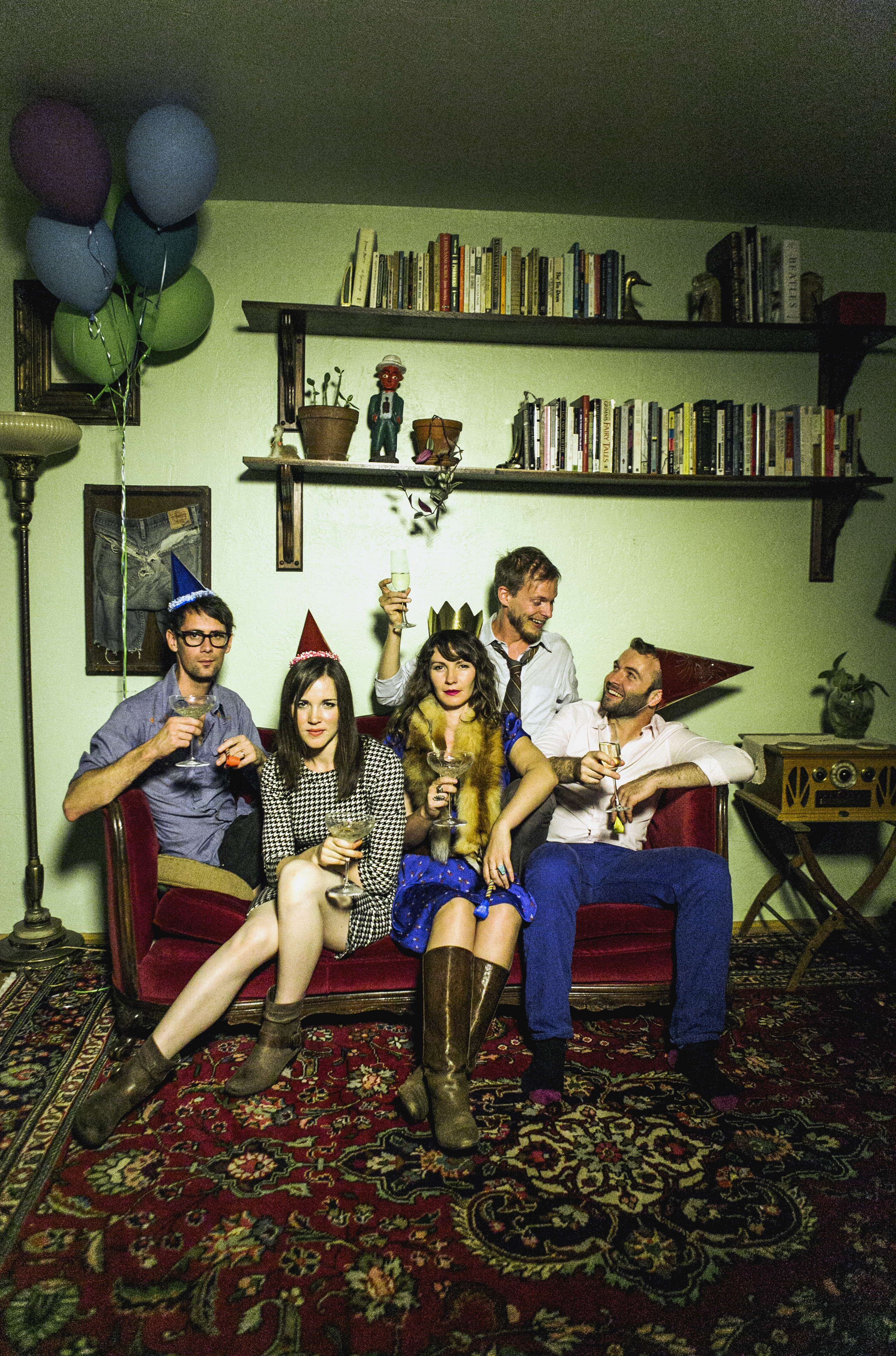 The dissonant white noise of rock ‘n’ roll and the hoots of SOhO rooftop regulars momentarily muted my friend’s voice before it came through the other end of the telephone, “Yeah man Mångo Mångo just came on! You don’t want to miss these guys get over here quick!” I rushed through the courtyard, was stamped by the bouncers and slid to the front of the crowd only to be engulfed by vibed-out synths and the highflying vocals of Anna Kasper.

The party was in full form and its celebratory intentions were clear. The audience donned polka-dotted party hats and the floor was littered with multicolored balloons in accordance with the birthday party album artwork of Ghost Tiger’s new EP, Some Friends Feel Like Family.

Kasper’s vocals continued to hover over the warm synths and cut through the buttery beats with a clean edge. The combination of sweet disco grooves and Kasper’s drop-dead gorgeous looks was the epitome of sensory overload. Her melody lines sent chills up the spine like Lana del Rey, but without the dreary rainy-day feeling.

I wiped a dumbfounded look off my face, shook the thoughts of making her my wife out of my head and resolved to dance like a chilled-out, tobacco-rolling hipster. Mångo Mångo had set the tone for this concert at SOhO, centered on the soulful stylized music from heartbreaking frontwomen and their wailing bands.

Next came the Blues and Greys, another hand-picked opener and local band with a stunning leading lady, Lindsey Ann. Their indie pop sound was reminiscent of The Killers and The Temper Trap, highlighting heavy rolling bass licks, fast high hats and popping snares that held down wandering guitar licks and Ann’s smooth vocals. Both openers were featured at the New Noise Festival last year and surely have a promising future of creation ahead of them.

Before Ghost Tiger took the stage, we stepped onto the rooftop to get some air, away from the now-brimming club. Outside, drunk foreigners hopped over the gate and tried to bribe security guards for entry into the sold-out show. Wearing thick Russian accents, they begged “Please! Please! We will pay whatever you want!”

The security guard calmly and sternly pushed them back behind the gate, simply shaking his head. Although, the scene was slightly pathetic, it was a definite validation that SOhO was the spot for seeing the best music in Santa Barbara on this night.

Back inside, the crowd was packed tightly together to get up-close and personal with the phantom animal, Ghost Tiger. Alixandra Macmillan-Fiedel, the lead vocalist, stood behind a keyboard with a cherry red, semi-hollow body Gretsch guitar that matched her lipstick. Her eyes and pursed lips sparkled as the rest of the band got set. Christopher Norlinger, lead guitarist, strapped up a black Fender Jaguar that crunched out of a tweed Bogner combo, while bass player Kevin Evans was saddled with a metallic gold Les Paul bass. With Emma Huston on keyboard and backup vocals and Chris Stansell crushing the drums, the band was complete and ready to show off their new tunes.

All of the songs were musically articulate and intriguing in different ways. Some tracks felt as if you were in your mother’s kitchen, while others conjured up memories of heartbreak or the feeling of wandering through a dark, enchanting forest. Towards the end of the set an ominous bang from Stansell’s floor tom reached down into the pits of the audience’s stomachs as an older man whispered to his wife, “I love this song.”

The song he was referencing was “Whiskey Winter,” which Macmillan-Fiedel described in an interview with the Daily Nexus as a chanting song.

“I wrote (Whiskey Winter) about four years ago … I was walking around the house with this little drum, kind of in solitude going a little crazy with that beat, because you know it’s sort of chanting … it was one of those songs that kind of just came to me and then I took it to the band and we developed it, of course,” Macmillan-Fiedel said.

Ghost Tiger ended their set with their catchy and captivating new single, “Science Camp.” Spiking the listener’s interest from the beginning with three loud handclaps, the song reels one in with a pulsing guitar chord. Lyrically, “Science Camp” follows the modern love story of royally fucking up and then begging for your lover back. The lyrics are barebones and take the listener for ride with a wonderful building bridge towards the end.

Ghost Tiger’s EP release party was a supreme success. Ghost Tiger will be on tour for the next few months, so if you missed them at SOhO check out their tour dates on their website or their Facebook page, and of course watch out for Mångo Mångo and Blues and Greys to be blowing up the local scene.