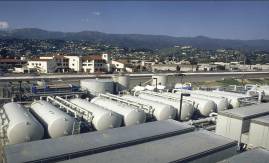 The City of Santa Barbara built the reverse osmosis desalination facility to meet water supply demands during a severe drought from 1986 to 1991. The plant, which has has been in long-term stand-by mode since 1991, is set for reactivation within two years under the circumstance that water supply demand cannot be met using all other available water sources, according to the City of Santa Barbara.

Water Resources Manager of Santa Barbara Joshua Haggmark said while the city is not rushing to reactivate the plant, doing so would be necessary if current conditions continue.

“We are getting a lot of criticism that we are jumping to desalt,” Haggmark said. “We are not jumping to desalt. It literally will take about a year, a little over a year to reactive it. So we are looking ahead to year six of the drought. We are currently in year four and if these conditions continue we will definitely need desalt to meet demands.”

Haggmark said the city has made a significant efforts to conserve limited water resources by reaching out to Santa Barbara residents.

“We spend a lot of money on a conservation program that we have here and we have staff that go out and meet with the community,” Haggmark said. “We offer free water check-ups to come help people with their water usage. We feel that is immensely successful and has allowed us to manage in this extraordinary drought.”

During the City Council meeting last Tuesday, the range for charged rates to renovate the plant has been set to achieve an end goal of $32 to $40 million, as it will cost $2.5 million per year to keep the plant functional in standby mode with a minimal amount of water, Water Supply Analyst of the City Water Resources Division Kelley Dyer said.

“The majority of that being labor costs,” Dyer said, “and we are still looking for ways to reduce those costs before we would actually be adopting rates to cover that budget.”

Haggmark said the current drought is much worse than the drought of 1947-1952, which is what the city is looking to as precedent for current planning.

Using water efficiently plays a key role in maintaining water supplies and relying less on the desalination plant, Haggmark said. According to him, even with the plant, and even though Santa Barbarans have met the 20 percent reduction target, further conservation is and will continue to be required, Haggmark said.

“Before this drought even hit, the community was using 20 percent less water than we used to be in the 80’s,” Haggmark said, “and that is despite adding about 5,000 people to the community, and we received about five million tourists that come here.”

The City of Santa Barbara sent notices out this Tuesday about rates to fund the reactivation of the plant in the event that there is no monetary assistance for the plant from bonds or from the Safe Drinking Water State Revolving Fund loan. Despite the city’s warnings, loan applications to the Fund by the City of Santa Barbara have been successful in the past, and according to Haggmark, the loan application, which “weighed 80 pounds,” will likely qualify for a low-interest long-term loan.

According to Haggmark, customers would pay a fixed rate of $4 to $9 a month to restart the plant, while the accumulation of $2.5 million a year will be picked up “only by the bigger water users.”

“So, if you are a tier one water user, you won’t pay for the operation of the desalt facility,” Haggmark said, “It will be picked up by the tier two and primarily by tier three water users.”

Using 3,000 gallons of water or less a year qualifies a customer as a tier one water user, Haggmark said.

According to Water Supply Conservation Manager of Goleta Ryan Drake, there has been no indication the facility will provide water for neighboring cities.

“They have their own rate process going on right now associated with the cost of construction of the plant to get it up and running again,” Drake said, “but we don’t have an existing connection to it and the city has indicated that they have no interest at this point in making it a regional facility.”

Drake also said the City of Santa Barbara may change its policy in the future to include cities such as Goleta.

“They have said in the future, ‘Well, it’s just an emergency project right now, so we only plan to use it for the drought,’ but then they have also kind of said ‘Well, in the future maybe we can talk about making it a regional facility,’” Drake said, “but that has not happened now. There is no current plans to do that and we have not been involved with the city in any way with that.”

The desalination plant’s estimated reactivation date is near the end of 2016, according to Haggmark.

“We are thinking 15 months right now, so if Council decides to move forward in May or June this year, it would be online September, October of 2016,” Haggmark said.