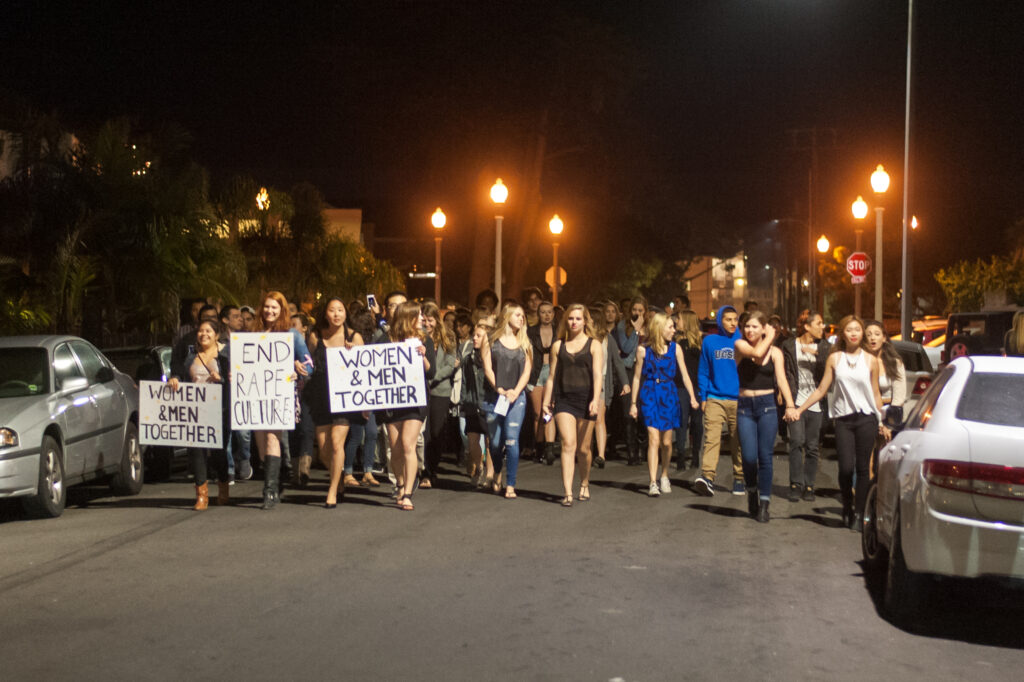 Students and Isla Vista residents, led by members of Sociology Professor Kum-Kum Bhavnani’s Introduction to Women, Culture, and Development (Soc 156A) class, marched down Del Playa Drive to bring attention to rape culture in Isla Vista this past Friday night.

The idea for the demonstration emerged after Bhavnani and students from her Soc 156A class met over dinner to discuss issues regarding the prevalence of sexual assault and harassment in I.V. During the march, over 100 demonstrators walked from Little Acorn Park to Del Playa, then proceeded to walk up and down Del Playa chanting “End rape culture!” and “Consent is an enthusiastic yes!”

I think most women who live in Isla Vista can relate to the discomfort and unease that can occur from any kind of sexual harassment. – Fourth-year sociology major Audrey Westerlund

Fourth-year sociology major Audrey Westerlund said Bhavnani, who is also Chair of the Academic Senate, prompted her students to organize an event that addressed what they felt were the most prevalent issues in I.V.

“Immediately, rape culture surfaced as the biggest issue for all of us. Professor Bhavnani prompted us a little and we decided to do something about it,” said Westerlund. “The rest is history.”

According to third-year anthropology and psychology double major Alexandra Ballinger, event participants felt that Friday’s demonstration was vital in order to bring attention to what many students see as an increase of sexual violence in I.V.

“It was rewarding to be able to say publicly that there are actually people who care about this problem [and] so many people who know it’s unacceptable,” Ballinger said. “In a community where rape happens all the time, we don’t get a chances to say that enough.”

Westerlund said the event helped shed light on issues regarding safety for women in I.V. and that turnout exceeded organizers’ expectations by amassing twice predicted amount of attendees.

“I think most women who live in Isla Vista can relate to the discomfort and unease that can occur from any kind of sexual harassment,” Westerlund said. “The fact that this happens in Isla Vista makes this event really relevant to our community.” 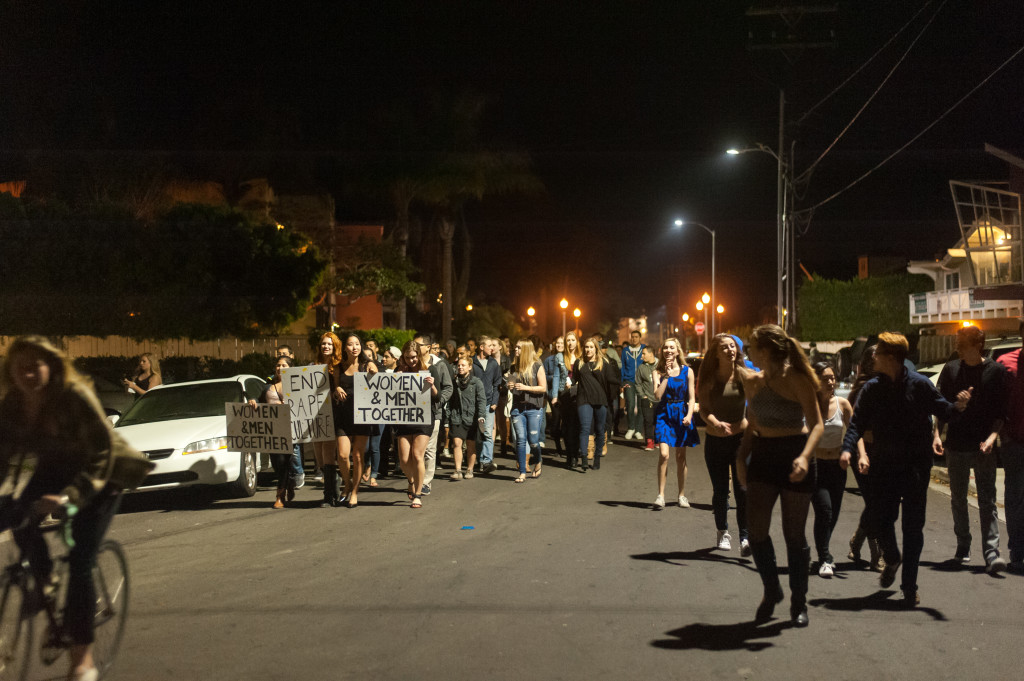 Participants walked the one-mile stretch while holding posters and passing out flyers that read “No excuse for rape. End rape culture.” According to Westerlund, event organizers intentionally staged the march on Del Playa in order to bring attention to sexual assault in an area that has historically typified what many students see as the party culture in I.V.

“We planned the walk for DP on a Friday night in order to reach the target audience,” Westerlund said. “DP is always filled with students, often intoxicated, looking or headed towards a party. This group is especially at risk of rape, sexual assault or harassment. We wanted to bring the problem to light in its own arena.”

During the demonstration, many students and I.V. residents cheered and clapped from their Del Playa balconies, high-fived participants or took videos of the passing crowd.

Organizers invited students to participate in the demonstration via Facebook in order to facilitate discussion on rape culture in I.V., third-year sociology major and event coordinator Zoe Monty-Montalvo said.

“This is an interactive event to help make known that there does exist in Isla Vista a rape culture and this we hope will provide a space where students can comfortably confront rape culture,” Monty-Montalvo said.

I was marching to end the cat-calling that occurs [in I.V.]. To end the, ‘Well what was she wearing?’ and ‘Was she drunk?’ questions, and to end the society that makes these questions okay. – Third-year global studies major Claire Breen

According to Jonathan Gonzalez, a fourth-year political science major and Vice President of Sigma Lambda Beta fraternity’s local chapter, rape is just as much a male issue as it is a female issue and should be addressed equally by both sexes.

“Instead of teaching girls to be careful and to watch their backs, we should be teaching the boys to not rape. Our current generation is the next generation of parents so it’s up to us to get educated and educate our boys and girls,” said Gonzalez. “Boys and girls were stopping their normal weekend partying to cheer and chant with us.”

Alumnus and Nu Alpha Kappa fraternity member Carlos Maldonado said rape culture is a topic that needs to be given immediate attention, especially within organizations that face controversy regarding sexual assault.

“As a fraternity member, it is essential to be present at these important events so that we may raise awareness and establish accountability within our own organizations so that we do not perpetuate this culture,” said Maldonado. 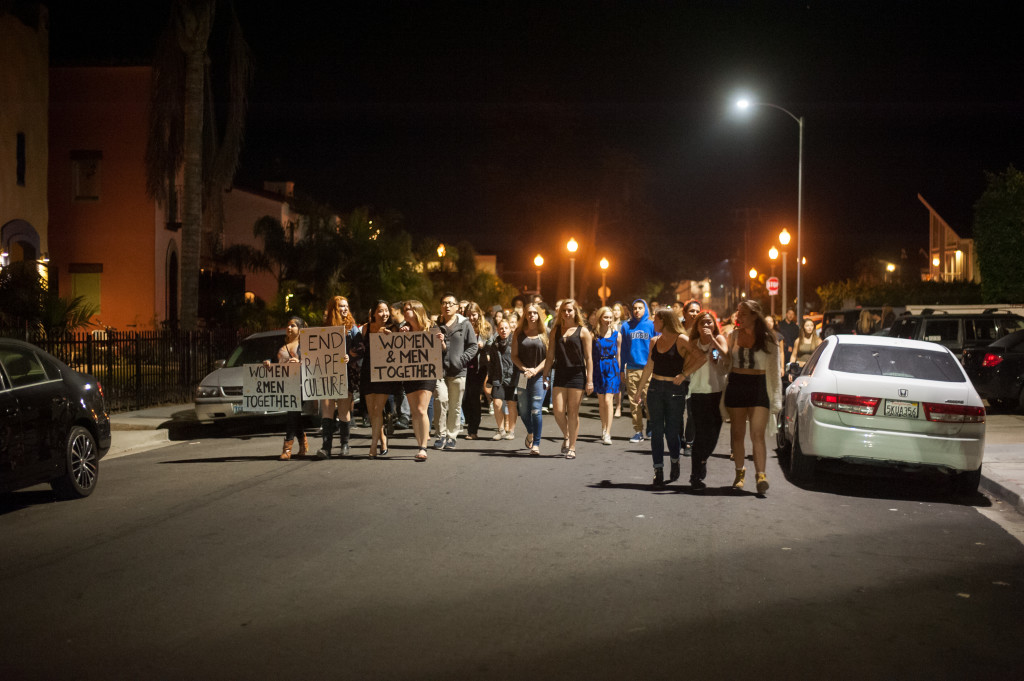 According to third-year global studies major Claire Breen, event attendees marched in order to empower others to participate in the local and nationwide movement toward ending rape culture.

“I think that rape culture is horrifically prevalent not only in Isla Vista, but on all college campuses in the United States,” said Breen. “I was marching to end the cat-calling that occurs [in I.V.]. To end the, ‘Well what was she wearing?’ and ‘Was she drunk?’ questions, and to end the society that makes these questions okay.”