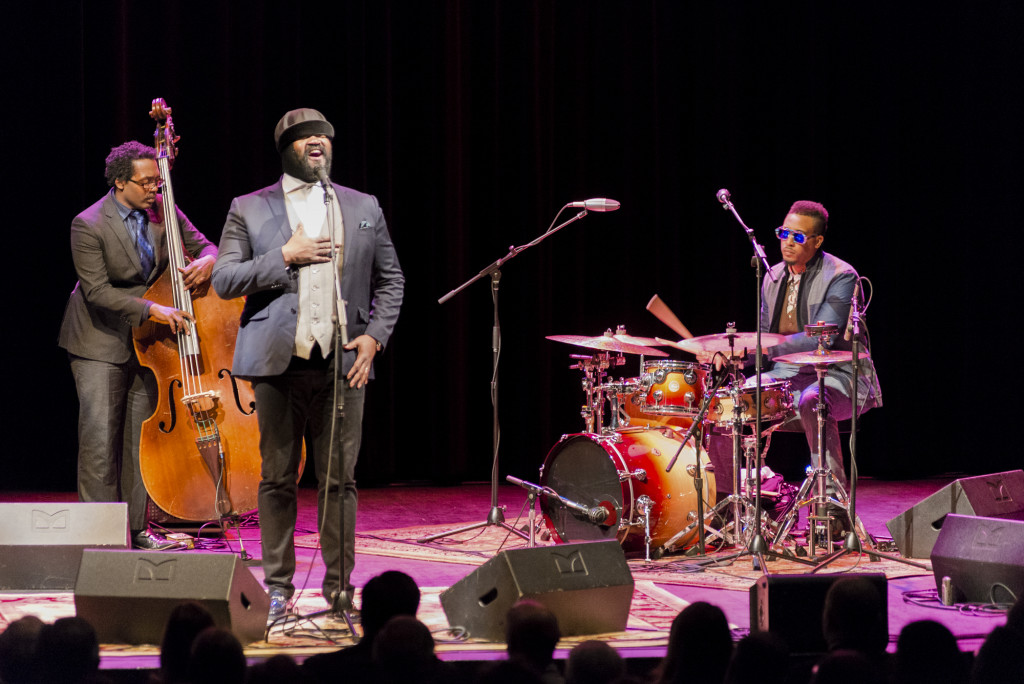 Campbell Hall buzzed with energy as a crowd waited for jazz singer Gregory Porter to take the stage. Porter has generated an increasing amount of buzz lately; his 2014 Grammy win for Best Jazz Vocal Album only the latest in a stream of high recognition for his work. Given the singer’s reputation and the fact that he does not often play on the West Coast, this special performance brought by UCSB Arts & Lectures met a thrilled audience.

The California native’s rich baritone voice poured forth like honey whiskey, his tone and delivery intoxicating. He wore a grey jacket over a light green vest along with his signature black cap. After a few bluesy verses, Sato took off on a lofty solo that immediately established his impressive sax chops. Crawford followed with a classical-inspired piano solo. The crowd whooped and cheered as the song climaxed into Porter’s passionate vocals.

After proper band introductions, a riotous bebop tune discharged. Sato and Crawford delivered rollicking solos that had audience members calling out in delight. A man in the back far right of the audience shouted comments like “yeah, sing it!”

“For this next one, I’m gonna ask you guys to sing along, kinda like that guy is already doing,” Porter joked. “Yeah I see you man, I see you.” Back Right Guy proceeded to sing a very audible harmony atop the call-and-response chorus of the next song. But it didn’t come off as rude. Rather, adding one’s voice in this way seemed to be encouraged.

Porter then got the audience clapping enthusiastically to the grooving beat of “Liquid Spirit,” the title track from his latest album. Others in the crowd started calling out with emotion during particularly powerful moments. The fourth wall receded more and more as the night went on.

A highlight of the show came when Porter sang two slow blues verses a cappella. His superb voice and affecting delivery sent shivers down the spine. Suddenly his lyrics melted into a drumroll and the transition filled the room with anticipatory energy.  Harrold then broke into the best drum solo this reporter has ever seen, at once primal and modern, and extremely satisfying.

The whole band exuded passion and control in their playing. Emotive facial expressions accompanied impressive feats of musical skill. Throughout the performance, sophistication commingled with rousing music and audience participation, two qualities that do not generally lend themselves to a refined atmosphere.

One self-described former “jazz head” in attendance, who wished to remain anonymous, said the show was quite different than the ones he used to see. He mentioned that he had expected a bit more “coherent behavior” from the band, referring to the abundant amount of soloing. He was impressed with the skill of all the performers despite this, particularly Porter and Sato.

“Peace and love y’all, thanks so much,” Porter said before strolling offstage with a wave and a smile. The audience applauded wildly and gave him a standing ovation as the band continued to play. After a few minutes, he came back and performed several more songs. When he strode off for a second time, the audience rose again in another standing ovation, this time clapping to the beat. The show ended with a satisfying bass solo from James.

Gregory Porter and his band delivered an exceptional performance last Thursday. It was everything one hopes a concert will be; moving and entertaining with the occasional spine-chill. In this reporter’s humble opinion, the hype about Gregory Porter is well-deserved.