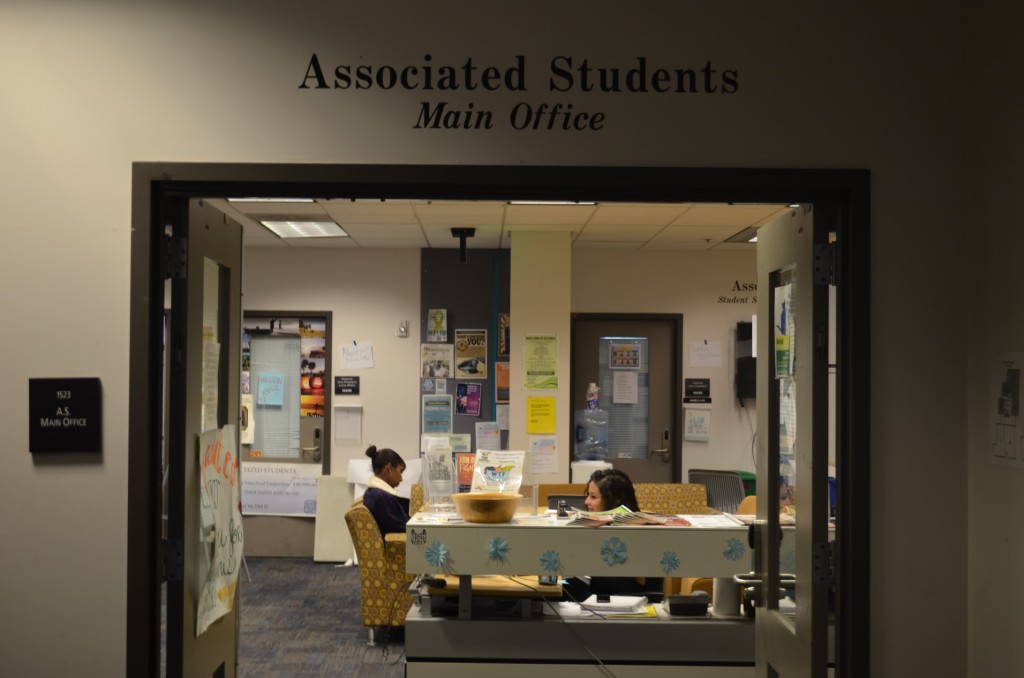 Associated Students President Ali Guthy presented a proposal to create a new entrance to the A.S. Main Office in the MultiCultural Center (MCC) during last week’s A.S. Senate meeting in response to what she claims is student-need as described in the Vision 2020 A.S. Student Strategic Plan.

The proposal, according to Guthy, is a response to the A.S. Student Strategic Plan released in Spring 2014, which laid out A.S.’s goals for the next five years. Under the proposal, the second floor of the outdoor MCC patio area will be changed to a conference room that will be predominantly used by A.S. officials.

According to fourth-year sociology and psychology major Guthy, there are plenty of reasons to have a new entrance, since she claims that the current space is “bunker-like” and “inaccessible” to students.

“Although the association has done its best to advertise its location, the bunker-like structure inhibits open access to the space and its resources,” Guthy said. “Associated Students is funded entirely by students and serves to facilitate student needs. I find it troubling that this space isn’t readily open and accessible to all students, given that students are the ones paying for it.”

Many generations of students have been asking for greater accessibility to these spaces and such a change will benefit future students. – AS President Ali Guthy

MCC office manager Enma Elias however said that the idea of a new entrance is “nice,” but that MCC employees would like things to stay the same.

“It definitely would be nice to see this proposal, but from what I know, we want to keep things the same,” Elias said. “Especially because the outdoor patio area outside of the MCC entrance is always used for conferences each summer and spring by people outside of UCSB.”

Although the proposal has not been approved by Senate, Guthy said it will benefit future students, particularly student leaders, for informational purposes.

“Future student leaders, over the next few years, could continue to contribute information to this space and feature information that they find necessary,” Guthy said.

“I do not like the idea of this proposal at all. Ali did not have the courtesy to discuss this with [co-chair Anumita Kaur] and I, and I find that extremely unfair,” Baker said in an email.

“As MCC co-chairs we should have been involved in the process of developing this idea as this construction will absolutely obstruct MCC affairs.”

According to Baker, Guthy’s proposal, if acted upon, could obstruct other non-student government bodies from properly organizing.

“The MCC is the only place that marginalized groups (people of color and/or LGBTQ) have to organize, study and have social/political gatherings,” Baker said in an email.

However, Guthy said students have always had a specific demand for greater accessibility to the A.S. Main Office.

“Many generations of students have been asking for greater accessibility to these spaces and such a change will benefit future students,” Guthy said.

According to Elias, the current lack of space on campus will only be exacerbated should plans for the new entrance come to fruition.

“Corwin Pavilion has a patio right outside of our main entrance. Corwin needs their space as well and I don’t think they’d like that idea,” Elias said. “UCen lacks space too and all these building are near so it’s all relative: There’s a lack of space … It’s actually really cramped in here.”

Productive for the privileged, but what about folks who are disadvantaged? – MCC co-chair Ashley Baker

Fourth-year film & media studies major and MCC media designer A.J. Price said she also does not agree with Guthy’s proposal and plans to “vote against it for sure” if it is proposed to the student body.

Second-year French and economics-accounting major and Democratic Process (DP) party senator Steven Kwok however said the new entrance would be beneficial because it would provide students with direct access to the A.S. Main Office and would thus allow students to be “more connected to their government.”

“I think the new entrance to the MCC is a great idea,” Kwok said in an email. “The student body will be able to directly access AS through the entrance instead of having to enter through the hall that extends to the main corridor of the MCC. This gives AS a face to the outside beyond the lettering that is currently on the building.”

Former Open People’s Party (OPP) senator and fourth-year political science major Marvin Ramirez said the university lacks student space and that students can benefit “greatly” from the new space should it be constructed.

“Seeing as people out in I.V. are now charging students for their access to study spaces, spacing has been a large issue,” Ramirez said. “The university accepts more students which is awesome, but remains the same structurally inside. This cannot always be the case so a new conference room space may be of great value. Creating a new conference room that may potentially be a long-term investment is not a bad thing.”

However, Baker said the proposal and conference room renovation is an example of what she alleges is elitist decision-making favoring “white and hetero-normative” OPP affiliates who she claims will not solve space issues that benefit people of color.

“Productive for the privileged, but what about folks who are disadvantaged?” Baker said in an email. “Where are the fruits of their labor? We must note that the university was physically built and is still preserved by the muscle by countless economically deprived people of color. Look at how they have cornered El Centro with the library renovation.”

According to Baker, enacting Guthy’s proposed renovation will continue to unevenly distribute space to a student group that has “more than enough.”

“I do not believe this change to be necessary as they have more than enough space. Half of the university belongs to them. How inconsiderate can one be is my question?” Baker said in an email. “If this proposal is passed future generations will once again have to fight for an area that was already theirs.”

Honestly, who the hell cares about OPP/DP and where they stand on this? It isn’t a partisan issue, it’s not like everyone in those groups thinks as one unit, and the parties aren’t even relevant at this point in time. This article seeks to sensationalize a proposal by making it about party politics, but fails at doing so, especially because Steven thinks it’s a good idea (as a member of DP) Also, MCC co-chair doesn’t know what she’s talking about. El Centro has nothing to do with the library construction. Also, she seems to forget that there are disadvantaged students… Read more »

The headline is not sensational, it’s entirely accurate. There are quotes from various people that work and have offices within the MCC that hold opposing viewpoints, as the headline suggests. Also simply reporting party affiliation of A.S. members (aka providing basic information) hardly constitutes
“sensationalizing” a story. Finally, an elected student official proposing to spend tens of thousands of dollars on a pet project is considered newsworthy by many other students. If reading news upsets you, I would refrain from doing so in the future. Kudos on your impending graduation, you will surely be missed.

The Nexus has gone to shit.