The Daily Nexus
News
SB Hillel Hosts Panel Examining Israel in the Media
January 15, 2015 at 5:00 am by William Leiva 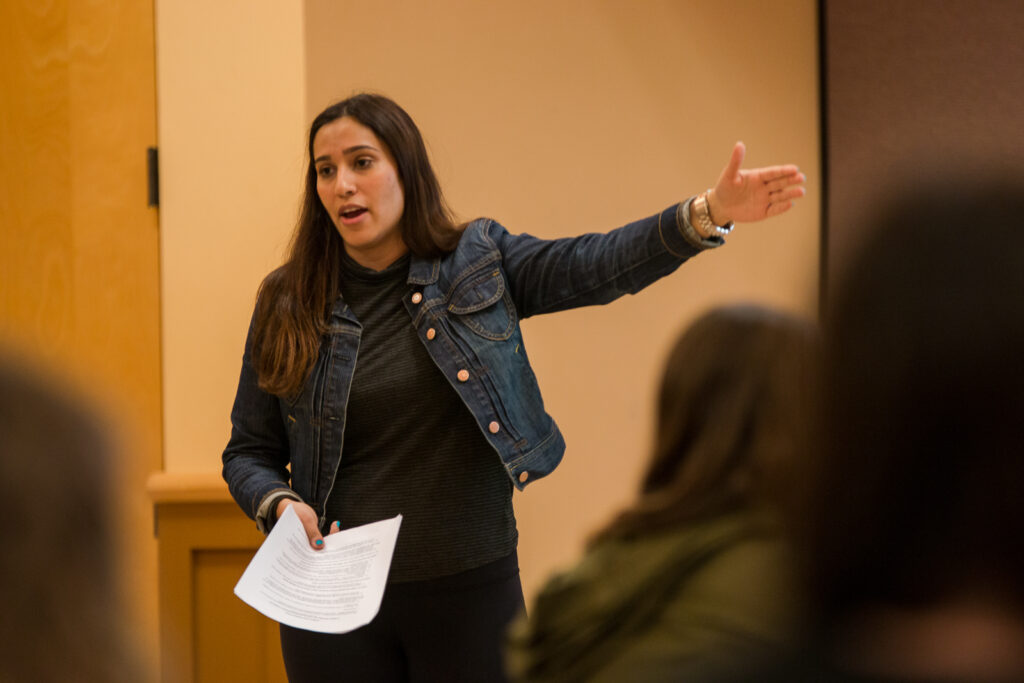 The “Israel 101” panel was held at the SB Hillel on Tuesday. Topics such as the formation of the Jewish state, the Arab-Israeli conflict and Israel’s scientific and technological achievements were discussed. Here, Arezu Hashemi explains the history of Israel.Stephen Manga/Daily Nexus

Santa Barbara Hillel is the Santa Barbara chapter of the Hillel Foundation for Jewish Campus Life, an international nonprofit providing resources for Jewish college students with chapters at over 500 universities and colleges around the world. The panel discussed the Arab-Israeli conflict, the formation of Israel in 1948, various terrorist attacks on Israel and the various scientific and technological innovations developed in Israel.

President of Hillel and third-year global studies and anthropology major Sarah Tagger said the event sought to educate students and I.V. residents on “the truth” behind Israel’s history in order to discredit negative viewpoints about the state created by the media. The presentation was accompanied by a variety of traditional Jewish dishes.

Third-year history and religious studies major Arezu Hashemi said she believes that negativity toward Israel in a variety of news coverage is misrepresented or untrue.

“Over the summer, we’ve seen negative portrayals towards Israel,” Hashemi said. “I think that students who identify with the conflict are affected. But, the students who are not aware of the conflict and only listen to the negative news affect the world on a larger scale because of what they learn in college and it emerges in the future.”

According to Hashemi, Israel is making significant contributions to medicine and science, including biomedical research, investments in education and environmental conservation.

“Humanitarian efforts regarding medicine have been sought out by Israel,” Hashemi said. “For example, Save a Child’s Heart is an organization in Israel where Israel pays for and brings less fortunate children who need heart transplants.”

Hashemi said she has familial ties in Israel and that her family has faced many conflicts.

“It’s important to know the conflicts and the people that are involved,” Hashemi said. “The history of the people involved is important to know. I have family who lives in Israel and I identify as Jewish. Israel faces many conflicts, and valid information on these events are essential because it is not biased.”

According to UC Student Association (UCSA) Legislative Liaison and third-year sociology major Mohsin Mirza however, American media is biased towards pro-Israel news coverage. Mirza said he encourages individuals to consider Palestinians in their perspectives on the Arab-Israeli conflict.

“I think the American media is unique in its pro-Israel bias which consistently whitewashes and justifies Israel’s crimes,” Mirza said. “I think it’s important for us all to push back against these narratives in favor of one that is more respectful of the human rights of the Palestinian people.”

Mirza also said he believes Israel’s actions justify criticism from groups like campus organization Students for Justice in Palestine, a group of students, faculty and staff that advocate for Palestinian self-determination.

“Israel’s war crimes [are] our responsibility as well and is the reason why organizations like Students for Justice in Palestine single out the country for criticism,” Mirza said.

Second-year psychology major Eidan Schalom said violence in Israel and worldwide stems from radical insurgence within religious circles, but does not reflect on religious individuals as a whole.

“Radicals in every religion are opposites to peace,” Schalom said. “I lived in Israel for two years and I noticed that even radical Judaism is not popular but has been seen before. In 1995, the Israeli leader was assassinated by a radical Jew who had momentum.”

According to Tagger, avoiding biases in media is vital to deciphering accurate information about the Arab-Israeli conflict.

“There are a lot of students who just listen to the news and do not pay attention to deeper information. Biased information leads to untrue information and can be hurtful to people,” Tagger said, “We want to portray that as best we can because people deserve to know accurate information.”

A version of this story appeared on page 7 of Thursday, January 15, 2015’s print edition of the Daily Nexus.