The Daily Nexus
News
UC Student Regent-Designate Meets With Students
January 13, 2015 at 2:50 am by Megan Mineiro 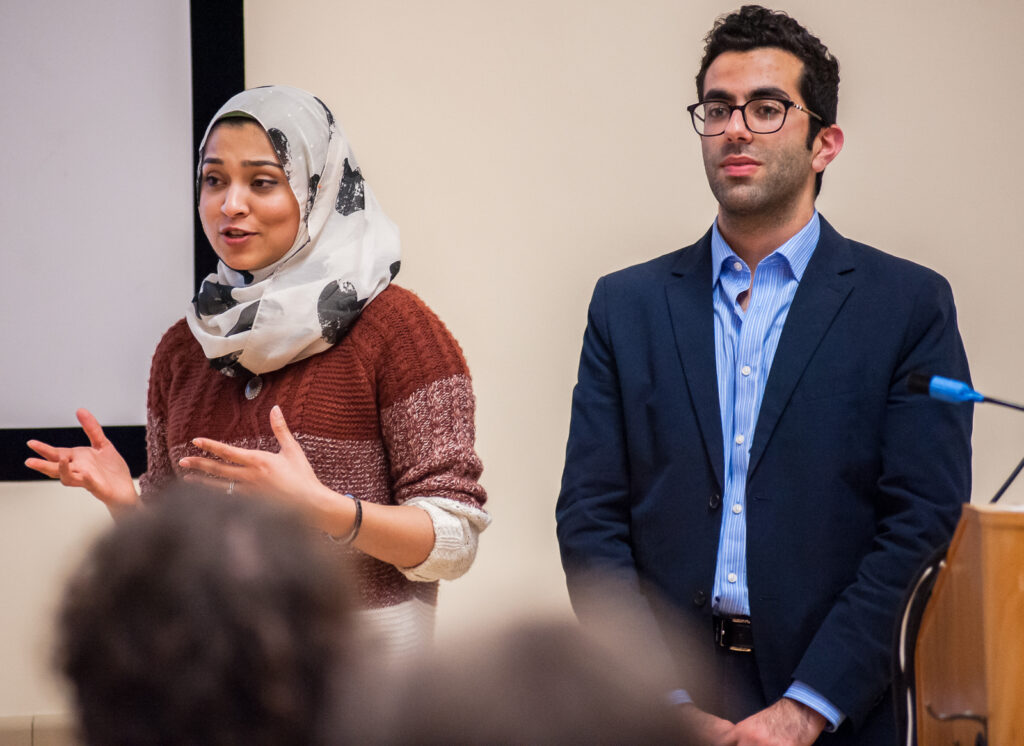 Their visit is the first stop in a UC system-wide tour to visit each undergraduate campus from now until Feb. 11. During their open forum Saifuddin and Oved explained the student regent application process and discussed the responsibilities that accompany the position in order to reach out to a more diverse pool of applicants for the 2016-17 Student Regent application. Issues facing UC students were also discussed, including mental health, food security and the recently approved tuition increase plan.

Saifuddin said the main issue facing UC students today, which she has focused on extensively during her term as a regent, is food security. According to Saifuddin, she is looking to address issues of food inaccessibility for students on campuses in which food prices tend to be high.

“I think it is a problem that students have to make a decision between books and food,” Saifuddin said. “Students should never have to skip a meal. I’m working on creating a system-wide food security model that still has the flexibility for each of the campuses to adapt for their own culture and their own needs, but has some kind of coordinated response so that students don’t go hungry.”

According to second-year political science major Stevan Abdalmalik, who attended the forum to learn about how students can mobilize to support student regents, Saifuddin and Oved are using a different recruitment approach this year, meeting with students across the system in an open forum, as well as forums specifically for African American, Asian Pacific American, Chicano/Latino, American Indian/Native American, Middle Eastern and undocumented student minority groups.

“They are looking for a very diverse group of applicants this year and that’s the exact reason why they’re doing this tour … to talk with students that are on the ground, students that perhaps have not understood what this position entails and to get them interested,” Abdalmalik said. “I think that they have done a very good job of doing so, especially when talking to students that are normally underrepresented such as Middle Eastern students, undocumented students.”

During the forum, Saifuddin said her experience as the only member of the Board of Regents outside of ex-officio members to vote “no” on the proposed tuition increase was difficult but necessary.

According to Saifuddin, students from an upper-income level family could likely handle an increase of $600, which is approximately what the tuition increase would be annually, but that it puts unnecessary pressure on middle-income students.

“It seems kinda affordable, but for middle-class students that’s like one month of rent and that’s a lot of hours of work,” Saifuddin said. “Work-study jobs do not make that much. It’s very rare to find a work study job that makes over $15 an hour, and that’s on the high end. It was kind of personal for me because I had gone through a tuition increase and I had to work. I felt that craziness, and really depression.”

Saifuddin also said she is concerned by what she perceives as continued divestment in the UC by the state over the last 10 to 20 years.

“The state is slowly dwindling the funds and increasing the budget for things like the Rainy Day Fund that the governor put another like $1.2 billion dollars into in the recent budgets, or prisons, which are really big, actually one of the things at the top,” Saifuddin said. “But when you work with students so intimately you understand what their personal struggle is and I just can’t support that.”

In addition, Oved is currently working on addressing safety on UC campuses, an issue he said he tackled while working in student government at UCLA and will continue to focus on when he becomes the official Student Regent in July of this year.

“One thing that we did is develop a mobile panic button safety application,” Oved said. “It was an idea I got from the UC [blue light] phone booths, but those aren’t practical. What we wanted to do was heighten safety resources at UCLA and make it more relevant so students are more equipped with resources. So in the event of an emergency they would be able to respond.”

According to Oved, the mobile safety application was created in partnership with Circle of 6, a free app that aims to prevent sexual assault on college campuses. The application, according to Oved, “centralizes” emergency communication efforts with six friends that become informed of a person’s location via GPS if they press a button indicating they need help.

“It’s these resources that I was told by multiple students, ‘I wish I had that, that night, when I really needed it,’ ” Oved said. “I think it’s a really valuable tool and really starts the conversation about safety awareness as well. It also falls under the umbrella of [the UC] President’s task force on responding to and protecting students from sexual assault.”

“Right now students make appointments for mental health counselors or psychologists and what ends up happening is they have to wait four, or five or six weeks, and then it’s finals time and it’s like, ‘Okay well, good job, nothing happened, we weren’t able to help students,’ ” Saifuddin said. “Every year there is a suicide on campus, so it’s really, really critical that we deal with this problem.”

Oved also said working one-on-one with UC President Janet Napolitano can be refreshing, because unlike some members of the Board of Regents she is very candid when communicating with Oved and Saifuddin.

“When we have meeting with her she doesn’t sugar coat her answers,” Oved said. “She is very straight forward. ‘Yes I agree and we’ll support this’ or ‘No I don’t agree and this is why.’ ”

According to Oved however, the Board’s straight-forward way of communicating can also be “frustrating.”

“Oftentimes that’s also a really frustrating thing in the student regent position is that you want to do so well and to advocate and to make a dent in your term,” Oved said, “but oftentimes there are people within the democracy who don’t really necessarily want to jump on board with you.”

Second year biopsychology major Niki Elyasi said she thought the student regents did a “fantastic job” during the forums and are commendable for reaching out to more students in order to allow for a more diverse student regent applicant pool.

“Bringing people who haven’t been involved in student government, [like] undocumented students [and] Middle Eastern students — I think that is just really, really great,” Elyasi said. “I give them huge kudos for spearheading that and for taking so much time out of what they do to just to reach out to people and make them see that this is something that you can actually do.”