The Daily Nexus
Sports
UCSB Wins Conference Opener in Comeback Fashion Against Cal Poly
January 12, 2015 at 5:02 am by Mark Salay 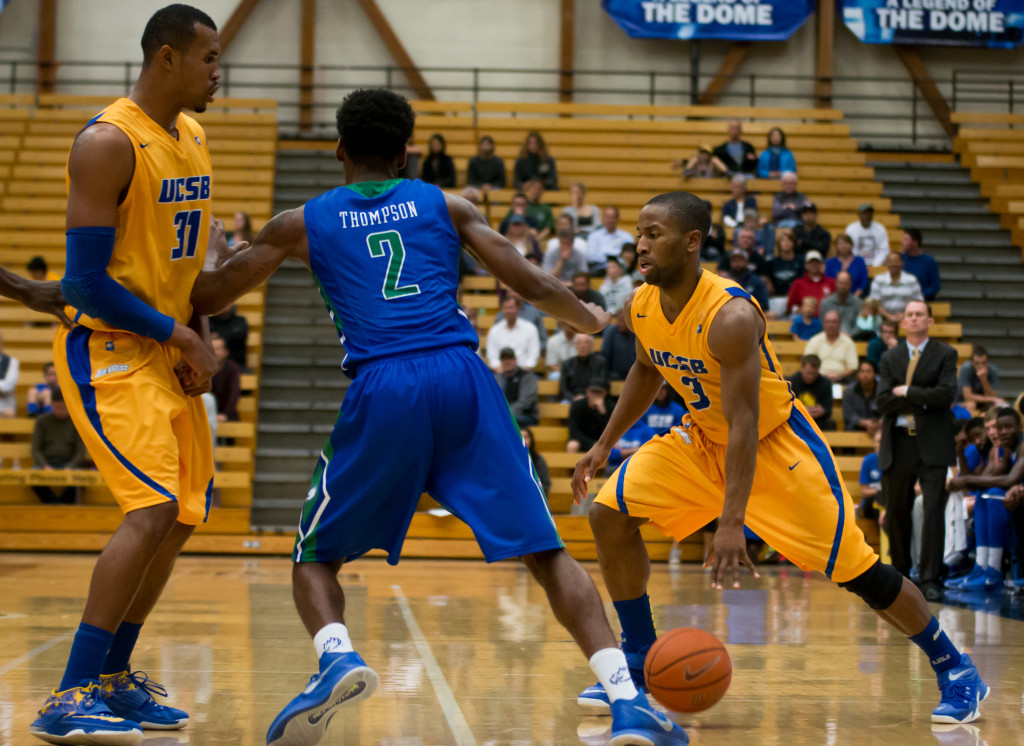 The UCSB men’s basketball team was outshot, outrebounded and for a majority of the time, outplayed during Saturday night’s Big West opener, but gutted out the needed result, a 50-45 win over Cal Poly on the road.

Led by 15 points from freshman guard Gabe Vincent, the Gauchos closed the game on a 20-5 run to steal a win from their crosstown rival.

“We started to hit shots. More importantly, we were able to play good defense the whole game and kept grinding and grinding,” senior center Alan Williams said. “Those are the type of road wins you need, especially in conference.”

Santa Barbara moves to 1-0 in Big West play and 8-7 overall while Cal Poly drops to 8-6 overall and 1-1 in conference.

The Gauchos fell into an early hole starting in the first half, but with seven minutes left and the score 40-30 in favor of Cal Poly, UCSB’s stagnant offense suddenly came to life with scoring from junior guard Michael Bryson and Vincent.

Vincent became the aggressor on offense starting with completing an and-one play, and then hitting a three to pull the Gauchos to within seven with nine minutes left. Vincent’s scoring coupled with the energetic play of sophomore guard Hunter Ford helped Santa Barbara get back in the game.

Ford, a walk-on who played a total of 16 minutes for the entire season prior to the game, was a much needed spark plug off the bench. Ford played 12 minutes and provided solid defense and rebounding, helping cut the lead to three after knocking down a three-pointer.

“I think it was huge for him to come in and step in the way he did, and really spark us off the bench,” Williams said. “He’s a great shooter and I think that showed last night that [Head Coach Bob Williams] was able to put him in there and trust him.”

Santa Barbara finally broke through with three straight three’s beginning with a Bryson shot that tied the game, followed by Vincent giving the Gauchos their first lead since the 14 minute mark of the first half. Bryson delivered the dagger with a minute left by draining an open three from the corner that put the Gauchos on top 46-42 and permanently gave the Gauchos the lead.

UCSB hung in after a slow start to begin the second half. An 8-0 run by Cal Poly in the first five minutes and a quick three fouls committed by Big Al increased the Mustangs’ lead and sent UCSB’s primary scorer to the bench. It was then that Santa Barbara opted for a rotation of shooters on the floor to knock down the three-point shots that helped it get back into the game.

The Mustangs had the lead for a majority of the game by forcing the Gauchos to play out of sync. Cal Poly imposed its own style of play, controlling the tempo and turning the game into a slow-downed, physical affair.

“Going into it we knew what kind of game it would be — a low scoring, grind-it out game,” Williams said. “I think we just really focused in and knew what we had to do in order to pull that game out.”

Cal Poly could have widened its 23-20 halftime lead, but the team shot only 25 percent in the first half to keep UCSB within striking distance, despite creating problems on defense.

Vincent led all scorers with 15 points and junior forward Joel Awich led the Mustangs with 13. Bryson, who had a quiet first half, added eight points, all coming in the second half.

“In the first half I was in some type of a rut, I owe a lot of that to the Cal Poly defense and them slowing us with that 1-3-1 [defense], which really threw me out of whack,” Bryson said. “My teammates stayed resilient and kept us in it, and put me in position in order to knock down big shots.”

Cal Poly defended Big Al well, limiting him to only six points on seven attempts in the first half. It was not until later that Williams found his rhythm, especially on the block where he finished with 15 rebounds to go along with nine points.

UCSB now prepares for its first home conference game this Thursday when it takes on Cal State Northridge, and then travels to Long Beach State Saturday.