The Daily Nexus
Film & TV
From Singsong to Sondheim: Anna Kendrick and Chris Pine Reveal All/Tell All
January 12, 2015 at 12:00 am by Jane Huson 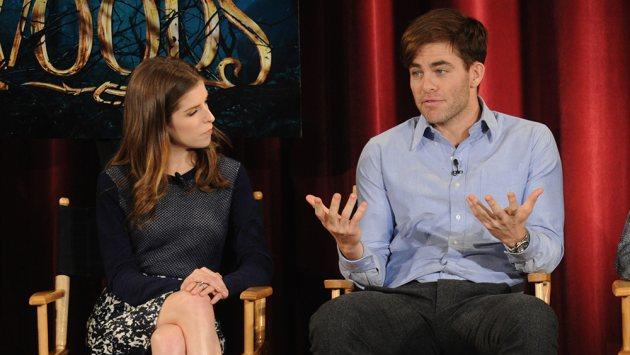 Lead actors give the Daily Nexus the inside scoop on their Christmas feature “Into the Woods.”

Chris Pine, famous for “Star Trek,” and Anna Kendrick of “Pitch Perfect” are adding another notch to their starry belts. The rising stars play Cinderella and her prince alongside Hollywood veterans Meryl Streep, Johnny Depp and Emily Blunt.

Disney presents Stephen Sondheim’s Broadway hit in a whole new light. We all know how Cinderella meets her dashing prince and overcomes her evil stepsisters, but we never found out what happened after her supposed happily-ever-after.

The musical cleverly merges the stories of Little Red Riding Hood, Jack and the Beanstalk, Rapunzel, Cinderella and a conniving witch portrayed by Streep. “These stories belong to the ages. It makes sense that we update them every generation,” said Kendrick.

“As Cinderella, I had to be an overthinking, over-logical princess. I think modern women have a tendency to overthink everything and not trust their gut. We have to look at everything from every angle,” said Kendrick. “Cinderella does that [through the whole movie] until something that she really has to reckon with happens. When the community is in crisis, suddenly it’s very clear to her what’s important.”

The 29-year-old actress from Maine continues to diversify her acting repertoire. Having played Bella Swan’s high school friend Jessica in “Twilight,” an irascible employee in “Up in the Air” and a pouty college freshman in “Pitch Perfect,” she now plays the ultimate fairy tale princess.

Kendrick did not think she was worthy of such a role at first. “When I found out they were making ‘Into the Woods’ I was like, ‘Oh great, I’ll audition for Little Red,’ and they’re like ‘No, a real child is going to play that part because it’s a film,’” she said in a recent interview with Access Hollywood.

“Playing Cinderella was frightening. It’s a completely different vocal range than I’m used to and really a sensibility I’m not used to, which is being open and kind and soft and vulnerable,” furthered Kendrick. “I usually play kind of funny, hard characters.”

For those who missed Ellen DeGeneres’s newsflash last week, Chris Pine also sings in the movie. While Kendrick adjusted to playing such a legendary role, the “Star Trek” actor had doubts about finding his perfect pitch.

He auditioned for “Into the Woods” with Frank Sinatra’s “Fly Me to the Moon.” “I auditioned for [director] Rob Marshall in his living room. He was very kind, noticed that I was nervous and he and John — his partner — joined me in singing the song and made me feel more comfortable,” he recalled.

Pine discussed the change from performing country songs in “Small Town Saturday Night” to singing music by Sondheim, the architect of “West Side Story” and “Sweeney Todd.” “The musical theater genre is very specific and quite different than the country music I had done before. I had fun learning the ins and outs of the genre and I had a lot of incredibly talented people who had worked in this medium before — from Anna to Meryl — so I had great company.”

Kendrick compared filming this movie to singing in her previous musical. “It was a lot harder. We are singing pop music in ‘Pitch Perfect’ and we’re singing Sondheim here. It was an unbelievable challenge, but singing Sondheim is so rewarding and fulfilling and it’s just a dream come true.”

Despite the actors’ qualms, director Rob Marshall knew all along that their synergy was special. “I think it’s just a testament to the creativity of Rob Marshall to see somebody like me as a Cinderella figure,” said the “Pitch Perfect” actress.

Be sure to catch these jokesters in action Christmas Day, Dec. 25 in theaters everywhere.