The Daily Nexus
The Brew Review
Utah’s Microbrewery Problem
January 8, 2015 at 5:00 am by Allison Wright

See yourself in the Beehive State, Utah. See the red rock arches towering over dusty Moab. See the pillowy powder of the self-proclaimed “greatest snow on Earth.” See the salt flats merge into a white sky on a snowy winter’s day. See the historical, grounded-blimp-shaped Salt Lake Tabernacle and hear its acoustic brilliance. See the Great Salt Lake and maybe even taste it. See the red, blue, green and yellow lights strung from roof to roof of Main Street Park City. See yourself there. Now see yourself with a beer clutched between your gloved fingers.

Perhaps not. The well-renowned mecca for Mormons and winter sports enthusiasts alike maintains some of the strictest alcohol regulation laws in the country. The state holds a monopoly on all liquor sales, grocery stores can only shelve inexpensive imported and domestic favorites such as Bud Light and Corona Extra if they contain less than 4 percent alcohol, (which for the respective 4.2 and 4.6 percent beers means totally different beers masquerading in familiar cans), all bartenders come equipped with a measuring tool attached to each bottle (wouldn’t want to overpour), and some bars even block alcohol from sight with a frosted glass “Zion Curtain.” If the cold-war attitude toward alcohol weren’t enough, some residents go as far as “keg legging,” and smuggle the 15.5 gallon party-starters across state lines. While Utah’s Prohibition-esque liquor laws have loosened in the past decade, they still tend to leave a beer aficionado avalanched by the weak and watered down. 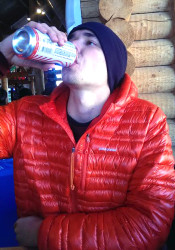 But despite the stranglehold on imbibing, a number of microbreweries pepper the state, with nearly 20 flourishing from scenic mountain towns to desert valleys. Six-packs of Salt Lake City’s Uinta can even be found in the refrigerators of Isla Vista’s own Keg N Bottle. While increasingly popular within and outside of Utah, breweries such as Uinta, Epic and Wasatch face an intimate problem: 60 percent of Utahns are members of the Church of Jesus Christ of Latter-day Saints. The religion’s founder banned alcoholic drinks (among other health vices) in the 1800s and his Words of Wisdom are still largely followed today. While not all Mormons completely eschew alcohol, the largely sober population imposes a limitation of potential customers for brewers in addition to legal regulations.

For the other 40 percent of residents and the large numbers of tourists that flock to the state, beer consumption manifests in what seems like an alternate universe. Getting drunk in a predominantly sober state is an inversion of the norm in itself, and self-identifying beer-lovers even urge, “drink bottles, not draughts.”  If it seems absurd to habitually avoid tap lists in order to obtain an inkling of a buzz, you are touching on Utah’s fundamental beer problem. While craft beer drinkers can agree the taste and complexity of the brew is of utmost importance, the mild to heavy intoxication that follows is a pleasurable symptom of the activity. Unfortunately, Utah’s liquor laws reduce that symptom.

So what does a beer snob do in the midst of Utah’s metaphorical drought? Luckily, the microbrewing heroes wield a subversive edge against the laws that so ruthlessly limit them. While brewers can follow the likes of Stone with high ABV beers, they are limited in how they can sell them: bottled only, hence the emphasis on avoiding draft beer. What brewers are limited in alcohol content they make up for in creativity, quality and even quantity. Pabst Blue Ribbon comes in increased volumes to make up for the decrease in ABV, and in addition to topnotch riffs on popular favorites such as heavily hopped IPAs, many microbreweries explore a diversity of flavor profiles and styles.

One such innovator is Park City’s Wasatch Brewery. The combined brewhouse and restaurant offers brew-infused eats such as wheat-beer-battered calamari alongside exemplary classics and innovative experiments. Their Apricot Hefeweizen received third nationwide at 2014’s Great American Beer Festival in the Fruit Wheat category and one of their rotating craft taps recently featured a Coconut Cherry Stout. The latter, a deep ruby and aromatic pour, awakened the senses to chocolate covered delicacies with a summery lightness to counter the otherwise sultry palette. The brewpub’s standout favorite is perhaps their most odd: the Jalapeno Cream Ale is neither as spicy nor as heavy as it sounds. Instead, the light, sudsy brew serves as the perfect pair for any cheesy dish. 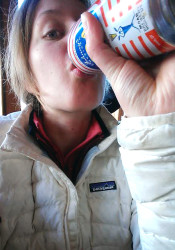 Along with Moab, 24 oz PBRs are a favorite. While reduced to a mere 3.2 percent alcohol by weight, the increased volume allows for a semblance of intoxication. Photo by Allison Wright.

With their persistence in brewing the weird and the wonderful alike despite hefty regulations, Wasatch and many of their peers amplify the subversive nature of their business by literally employing their beers to jokingly comment on the predominant population of the state. The bottle of Wasatch’s 8 percent and thus bottled Devastator Doppelbock boasts, “If you’re going to sin, sin big … this brew has developed a serious cult following. Imagine that — a cult following in Utah?!” and their lighter Polygamy Porter totes multiple quips: “Bring some home to the wives,” and “Why have just one?” One of Epic’s bombers literally depicts a young, chinstrap-bearded, helmeted and short-sleeved, white-button-down-clad missionary.

But beyond wittily battering Mormons, many of the Beehive State’s breweries celebrate the land that they occupy. Epic’s Spiral Jetty, a pale and smooth IPA out of Salt Lake City, derives its namesake from an artist’s installation in the Great Salt Lake. Moab Brewery and Wasatch alike gained their titles from the geographical expanses at their doorsteps.
New flavors and giggles aside, Utah beer poses one final obstacle to the drinker. Getting drunk on a “3.2” beer is a near impossibility (and let’s be honest, we all want to feel a little of that giddiness). The pursuit of tipsiness requires too many ounces, resulting in an uncomfortably swollen, sloshing stomach and maybe even the desire to quit drinking altogether. No matter how tasty the beer, the lack of social lubrication makes for a relatively boring drink.

Both subversive and celebratory, jesting and respectful, weak and worthwhile, Utahn beers balance on a fine line. Some scenarios, such as passing a tall can of Moab’s piney and light Johnny’s American Session IPA from mitten to mitten during a break from the slopes warms and unites drinkers as any good beer should. Others, such as a New Year’s Eve saturated with high ABV beers from out of state and their resulting hangover pale in comparison. Perhaps the Mormons have figured out what the rest of us functioning alcoholics have not. Their laws literally limit alcohol consumption and reduce the possibility of belligerence. While we may hold our drunken escapades dear, consider a world without drinking ad nauseum, without necessary Advils before class, without vomit clean-ups and without those naked mistakes we try to forget. Consider a world with endless session beers that aren’t pale ales and don’t leave you wrecked. Consider Utah.

Just an FYI, it is 3.2 by weight which is actually 4% alcohol by volume. Having lived in Utah, it isn’t as hard as you make it sound to get quality beers and a have a good time (aka a beer buzz). Trust me, that is possible and there have been many drunken escapades in my life to prove it.

In a land where breweries are flourishing and beer sales are at an all time high, I fail to see where the “problem” is. If it’s ‘Utah is weird, thus the beer is too’? then I could make arguments against it. Wasatch/Squatters/RedRock have all been awarded Best Brewery titles by the Brewers Association – judged on taste alone.

Taste with your tongue and not you eyes. If you get hung up on just the ABV numbers your missing out on half of the enjoyment.

I also want to bring to the readers and the journalists’ attention that the “Sessions Beer” of Utah has started a new trend in the craft brewery scene all over the country. While Utah brewers have been working around this restriction creatively for many years, it seems that brewers all over the US are realizing that making these lower ABV beers allow their patrons to drink and enjoy more of their crafts at one sitting compared to 7,8, and 9 percent beers that many can only drink one or two of at their establishment without getting too drunk too drive.… Read more »

This is why we need to get rid of this law. Not because 4% beer is bad (it can be very good!) But because we have to put up with this kind of ignorance.

All of Utah’s Epic Brewing’s brews are highpoint- above 5% abv and some close to 13%. While this means it can not be served on tap in our state, people can buy it by the bottle in the Epic store, their gastropub, the state liquor store (which refuses to carry Elder Brett and Big Bad Baptist due to their apparently uber-offensive names), restaurants and bars and enjoy an amazingly crafted delicious beer with a nice buzz. Some of the epic beers are highly rated (Big Bad Baptist at 100 on ratebeer.com) and have received many accolades and awards.

Just to be clear… you can INDEED get beer that is higher than 3.2% by WEIGHT. (Same as 4% abv.) But many of our Utah beers are higher alcohol. Hop Rising is 9%, Outer Darkness Russian Imperial Stout is 10.5%, Devastator (as mentioned in your article) is 8% ABV. The ONLY real difference is that higher alcohol beers can’t be served on draft. I understand that there are some misunderstandings about the beer scene in Utah, but you really should get your facts straight before going to print. This article gives the impression that you simply can’t get a stronger… Read more »

Hahaha. I hear the beer is twice as strong in Mammoth and hours closer to Santa Barbara. Utah is boring and has NO alcohol…….try Colorado.

Has this writer actually been to Utah to drink beer? This article perpetuates myths and does a true diservice to Utah’s award winning craft brew industry. Seriously, get your facts straight.

The beer at Squatters is very tasty, but it is usefuel for nothing more than to flush your kidneys.

I also question if the writer of this article has ever even been to Utah. Yes, there are laws in place that I wish were not. But if a beer snob were to find themselves in Utah let me tell you what they should do. That should drink a lot of good beer. Because we are able to make really good beer at both a lower and higher percentage and that is a skill that requires very good brewers! Also, trust me this is NOT a sober state and it’s not anywhere near impossible to get drunk and we have… Read more »

I’ve been to Utah and while you can get full flavored microbrews in a can, the 4% draft versions are just awful. An IPA at that alcohol percent tastes watered down to say the least.
The measured pours of alcohol into mixed drinks is one thing, but the beer laws need to go.