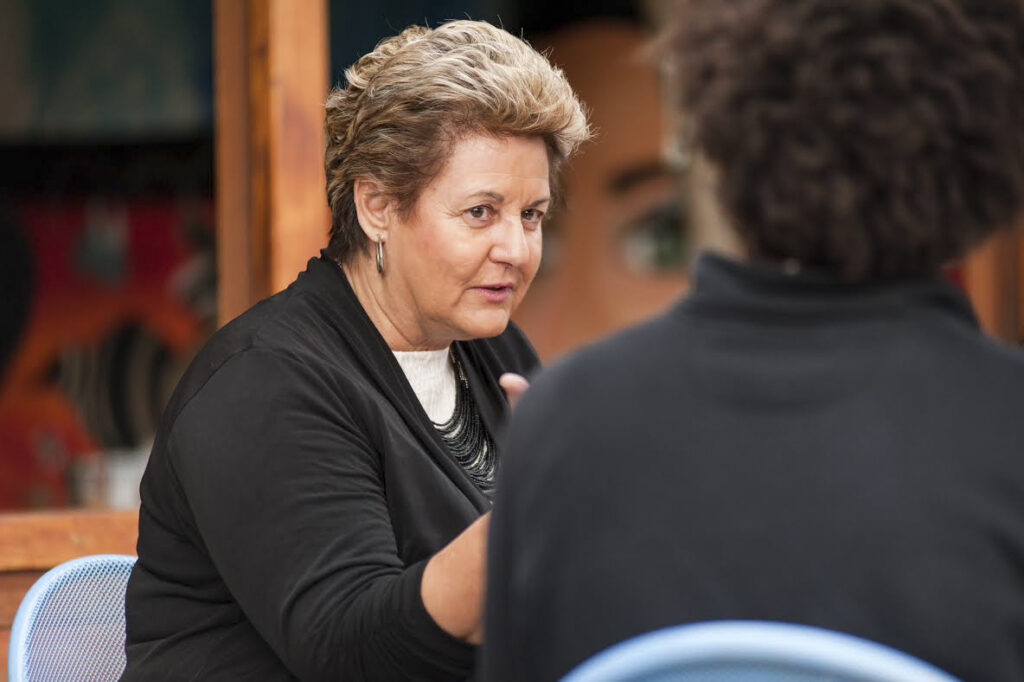 Santa Barbara County Third District Supervisor Doreen Farr held office hours at Coffee Collaborative in Isla Vista yesterday afternoon to give students and I.V. residents the chance to ask questions and make suggestions regarding I.V.’s future, particularly in regard to the movement toward self-governance.

During her office hours, Farr said the recent reemergence of self-governance discussions is due to the wide range of problems I.V. faced last year, including sexual assaults, Deltopia’s civil unrest and the May 23 mass murder. Farr also discussed the process currently underway attempting to establish a form of local government in I.V.

“Unfortunately, after the terrible events of last year, the issue really came to the floor again,” Farr said. “Associated Students became interested in it, trustees became interested in it, and so I thought well if there’s this much support, then maybe it’s time to take a look at it and see if there’s a way to craft something that would be unique to Isla Vista that would best fit the needs of Isla Vista and provide more representation on a wide variety of issues.”

California State Assembly Member for Santa Barbara Das Williams, an alumnus and I.V.-native, introduced a bill early in December into the California state legislature seeking to establish I.V. as a community services district (CSD), a form of local government allowing an unincorporated area to provide services for itself independent of county oversight.

According to Farr, the bill does not yet outline the specific brand of self-governance I.V. will potentially take on, but rather serves as a proclamation that can be amended when more concrete plans are established.

“It’s kind of a placeholder … after the series of meetings [Williams] is having are over with and the community has reached some consensus on what they want it to say, then he would amend the bill to include that in it and then it would start through the regular legislative process,” Farr said.

While Farr said she commends the ongoing town hall meetings that have served as forums for students and I.V. residents to discuss forms of self-governance, Farr also said she is concerned that the expectations of Isla Vistans may not meet the reality of a local government once it is implemented.

“I am supportive if the community can find some sort of consensus; I think my greatest concern is that a lot of people don’t understand what it could do and what it couldn’t do,” Farr said. “At the end of the day if something was formed I wouldn’t want people to be disappointed.”

Farr said it is currently unclear exactly what a governing body in I.V. would look like, but said one possible scenario of self-governance could include a governing board made up of a variety of representatives from I.V. and the university.

“I think people are looking for a body that sits locally,” Farr said. “I think in this case it might be some sort of board where there is representation from the county, the university, elected representatives from the community [and] some appointed property owners. I guess we’ll have to see what comes out of the discussions that Assembly Member Williams is having.”

According to Farr, the creation of a local government in I.V. could also lead to the introduction of local taxes or fees that would help fund local services and projects.

Farr also said one of the new services I.V. could benefit from is the introduction of a community resource officer, an individual “who could really be a full time, hands on liaison between the community and law enforcement.”

Assembly Member Williams’s bill will be amended in the upcoming months to include detailed plans for I.V. self-governance as public discussions continue. The next town hall regarding the bill and its contents will be held Feb. 5 in a location in I.V. to be announced.